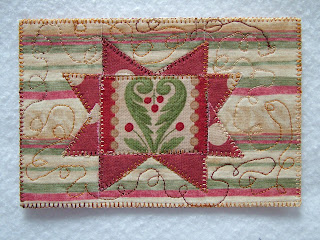 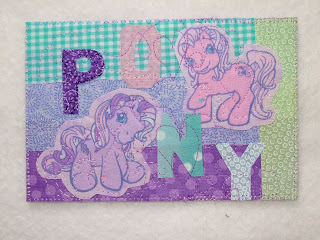 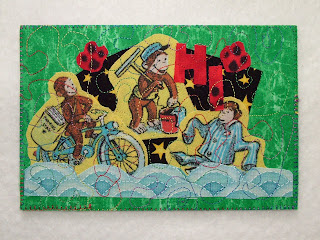 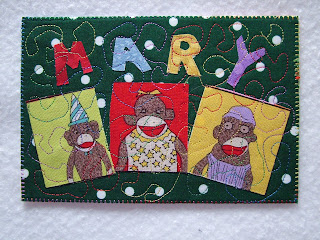 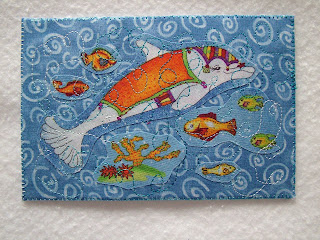 I had a busy weekend as you can see! I made some more fabric postcards on Saturday with the church quilt group. I tried to teach the ladies how to make them too. Some of them made some there and others took the things home to do it there. We meet again on Wednesday so we will see who has some finished! I am excited to put these in the mail. Some of them will go out now and some later.

I also sewed the label on the butterfly quilt that the ladies did for the church. I will have to take a picture of it and post it later (it's about 6:30am and the light is terrible!) I finished sewing the binding on the sampler quilt I made for my sister-in-law and brother-in-law. I was watching the most Dangerous Job, where the follow the Alaskan king crab fishermen on their boats in the Bearing Straights. If you have never seen it I highly recommend it. It is on the Discovery channel, but I digress. I also got the label done and sewn on. It feels good to get some quilts finished!

I didn't know what to begin next, but I had a wall hanging all cut out so I started that. It is called "Santa's Christmas Card". It is Santa standing next to a line of his reindeer. It called for 8 but I made it just a little bigger and added Rudolph! The pattern had him as the first one but there were only 8 including him and being slightly OCD, I had to have it correct! I got them all fused in place, no slight task as there were many small pieces. Then came the borders. I have decided to try to use what I have vs always buying new, at least whenever I can, so down the basement I went to my "stash" to look for border fabric. I almost gave up but this little voice kept nagging me to keep looking and go through the stash "one more time". So I did and I found perfect fabric for the border! So I cut them and put them on the wall hanging. Then I decided to cut and make the binding and I realized I would have to piece it and cut it smaller than I usually do to make it from the fabric I wanted to use (the same as the inner border), but I did it and I feel pretty good about it! Well, off to work I go now. Have a Blessed day!