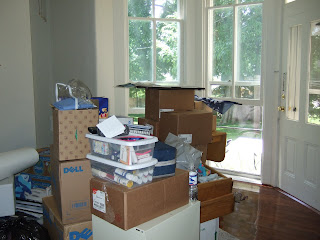 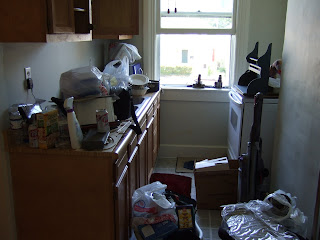 I know it has been a while since I posted anything and I am truly sorry. Unfortunately my life keeps going no matter how much I wish for a breather!

First of all, we finally moved all of Shelby's *stuff* to her new apt in Madison. As you can see from the pictures, it was quite an undertaking. My dad, 80 years old, brought us his van and snowmobile trailer to use for the occasion and even stayed to help us load up. Then we hit the road. DH drove the van with the trailer while Shelby and I (and the cat, snake and mice among other things, rode in her Liberty. After about 7hours of driving we finally arrived. We unloaded until about 11pm when we called it quits. DH and I slept on a blow up mattress on the floor. I didn't care, at least it was sleep! The next morning we got up and I began vacuuming while DH carried in more boxes. Shelby jumped in the shower and we were ready to break and go to breakfast. There was one small (furry) problem, no one could find the cat! We looked everywhere, and I mean everywhere. No cat. Maybe she got out? Since she is slightly brain damaged so she has a short memory which would be a problem if she got out and tried to find her way back. So when we got back from breakfast I told Shelby to go in and I would stand at the kitchen window and see if said cat bolted from hiding (assuming she was even there. No luck. I thought I heard meowing but they thought I was nuts (which of course I am but that's another story). So we finished unloading and DH wanted to leave as soon as possible cuz we knew it would be a long ride home. We had to bring the van back to my dad and then drive home so 4 hours longer than the ride there. My DH is a sweetie, he stopped in Carmel IN at a wonderful quilt shop and let me pick up a few things. I got some very pretty batik's and a border to complete another quilt. I also managed to design an entire quilt in my head on the L-O-N-G ride home. I can't tell you much about it though as it is for Shelby and I don't know how much of this she reads (no it is not a pirate quilt) So Shelby called us once, twice and three times on our ride home(did I mention it was L-O-N-G?). The last time we were almost home. She kept hearing jingling in her LR but each time she ran out there it was the fan cords hitting each other. So she finally sat there to watch the cords as she was tired of being fooled. All of a sudden her cat bolted out from inside the oven!!! I guess we missed looking there,lol!!! 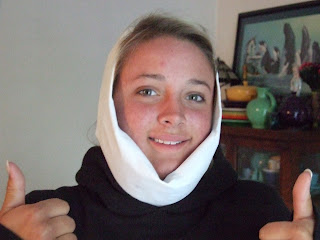 Tuesday morning I had to take DD#2 in to the oral surgeon to have all 4 of her wisdom teeth removed. This is a photo of her as soon as we got home. She was still retty drugged up! She is doing well and is only slightly puffy. The doctor said it only took them about 15 min to get all four out, so hopefully she will heal quickly! 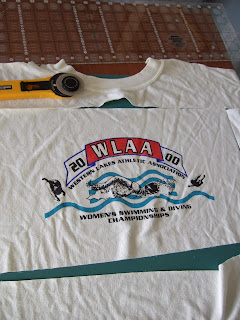 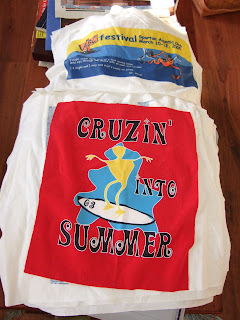 So, I have been yearning to get back into quilty things but with not much success. Remember my closet cleaning extravagana? Well, I ran across some of the tee shirts I have been saving to make DD#2 a tee shirt quilt with. I decided to cut them down as I think they will take up less room that way. She won't part with the most recent ones as she says, "That's the major part of my wardrobe!" So these are mostly from when she was younger. If anyone has any suggestions about a neat tee shirt quilt please let me know. I don't want to just straight set them all the same size with sashing in between.
That's what's happening in my life. What's new with yours?

Ouch! I hope her mouth heals up quickly. I am in the process of getting a cap and my mouth is driving me crazy!

I can't wait to see more of the T-shirt quilt. How did the kitty get IN the oven?

What a great idea a t shirt quilt I had never heard of that before.
Did you ever find that cat?
I hope the mouth heals up well, it all takes time.