What a wonderful week! 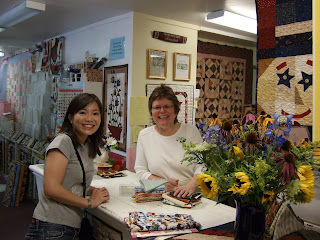 What a whilrwind of a week! I apologize for not writing sooner but you will soon see why. On Thursday I had to go to my father's house and pick up some things to bring to DD#1 in Indiana on friday. So I decided that I may as well make the best of it and called my friend Yuki to go on our own personal "Shop Hop". We ended up traveling to 4 different shops on our way from Ann Arbor to Grand Rapids. The first stop was a quiant little shop, Jennifer's Quilt Shop. They have a good deal on their fat quarters 11 for $20.00 I love this shop. This is a photo of Yuki and Jennifer at the shop. I think we liked this shop the most of all the shops we visited. The next stop was The Stitchery in Howell. It is a nice shop with a lot of batiks. They were holding some fabric for me to work on finishing DD#1's dragon quilt. I didn't think it was quite the right purple, but I didn't have the original and the numbers were correct so I bought it anyway. Then off to Lansing and Country Stitches. I found the correct purple there! Oh well, I will find something to use the other purple in. I got the cute new Thimbleberries panel with the bear and the bunny on the swing so I was happy. Then we were off to GR. There is a smeall shop by my dad's called The Attic Window. It is a small shop but boy did they origami a LOT of stuff into that small space!! Yuki did a lot of damage here! I didn't have anything specific to buy but I managed to find a few things that needed to go home with me : )
We then went to my dad's and picked up the things I needed to move to IN. My dad and my sister took us out for dinner at Perkins. It was a good day. Kind of a long drive home and Yuki and I were tired, but happy! 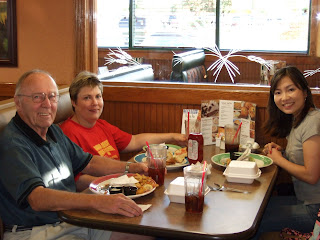 Now that you know that I went to Indiana (the entire family, actually I have a lot of pictures to share so I will be doing that over several days. First I wanted to show you the finished table runner that I began at Quilt University. Shelby loved it! 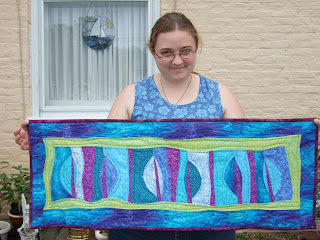 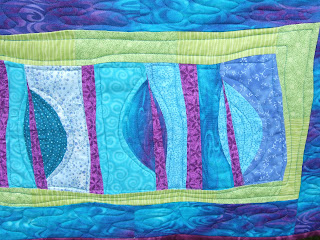 I don't know if you remember that her friend from Australia is visiting her but she will be with her until sometime mid September. When Shelby went to Australia 2 summers ago I made a quilt for her to take with her for her friend as a thank-you for allowing her to stay with her and carting her everywhere. Maz wanted something to remind her of a Michigan winter. The first thing I thought of was snow. So I made a quilt that was all pinwheels on various blue backgrounds ranging from very dark blue to very pale blue to simulate that snow begins way up in the dark sky and ends up in a white snowy pile.

Turns out Maz's mum is a quilter! She made a quilt for Shelby and Maz brought it with her. It is also a night sky and she made the blues progress from dark to light with gold stars set in. The neat thing is that if you look closely, some of the stars are friendship stars depicting the constellation of the Southern Cross, which she drew out on her label!! Isn't she clever!!?? Her folks own a 3000 acre sheep farm so I thought it was really fun that she found some light blue fabric with sheep on it to incorporate into the quilt. 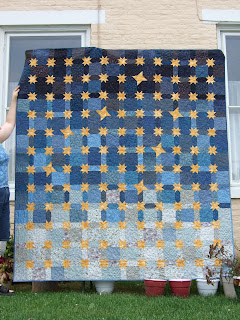 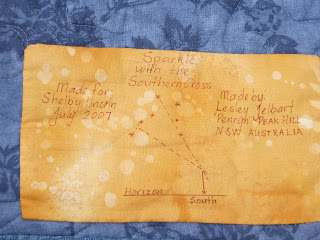 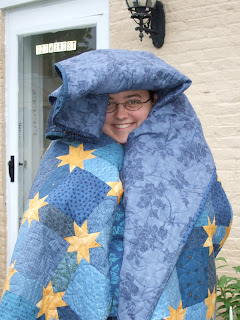 Shelby loved the quilt and Maz wraps up in it while she is here to stave off the home sickness. She is a really nice girl and it is nice to have international friends. They actually met in a writing group online several years ago. I corespond with her mum now and maybe someday I will be able to visit her. I just received an email this am from one of the exchange students we hosted when DD#2 was in the 5th grade (she is starting 2nd year uni this year). He will be coming to the US soon. apparently he is going to study for a semester in Montreal. I hope we can make plans to see him while he is here. I will write more later, I have to go and get some work for my job done now!