Like I have a brain in my head!
Yes, I am knitting a rug.
Do you remember Amanda Jean's post about her knitting a rug from left over fabric scraps?
Well I thought that was so cool and now I am doing it!
It takes quite a bit of time but I am actually kind of enjoying it!
I really need to be binding.
In fact I worked on my MSU quilt binding last night.
The binding is black and it makes it difficult to work on at night.
Plus by the time I was finished, my left arm and hand were killing me!
I thought I had that licked but no.
I took some Ibuprophen and iced my arm and
it is ok this am although I know that I did binding last night!
Here is my progress on my scrappy rug. 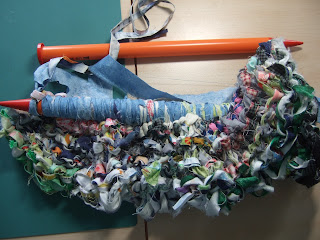 I wanted mine to be as big as possible so I cast on as many as I could.
I used size 35 needles.
It kind of twists around as I go but it is going to be pretty cool.
I used lots of the strips I usually discard.
I am finding that I have a LOT of blue scraps or a lot of white.
I think it would be better if you had lots of different colors though.
My stitches are not too regular but I hope that will add to the charm of it.
It will, right?

I did trim my quilt for Daniel (Yolanda's second quilt).
I was trimming and got called away and
when I got back I tried to move it to trim some more and it wouldn't budge.
This is why. 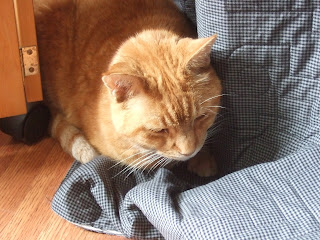 Someone (Jack) was lying on the back side as it draped over my machine table!
Thanks Jack, you're such a helper!

Speaking of helpers, I did some sewing on an upcoming project that you will see soon and
again was called away and when I returned this is what I found. 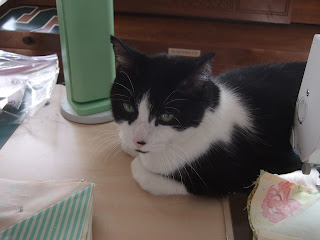 You can see that he is sitting behind my machine almost on top of what I am sewing!
Sheesh, Mosen!

Ok I leave you with a cool photo I took of a Moon Flower from my garden.
This was just before it opened up that evening.
Don't you just love that little curl on the tip? 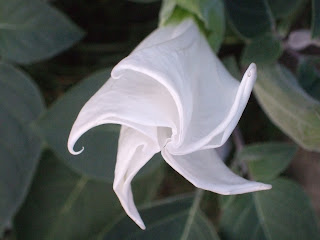 Here is one that has opened.
They open at night and are closed during the day. 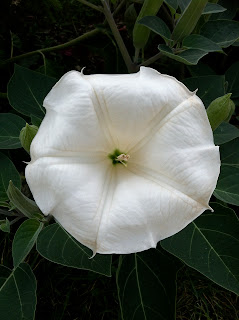 Have a wonderful day!

Knitting a fabric strip rug, is new to me. I have crocheted many. I love my rugs. They wash and wear like no other, and what a great way to use up those strips. I got my friend hooked on them, and she did a room size rug. Her dad build a table that slid over her chair and allowed her to rest it on as she worked on it. I was impressed at how big she made it, although she said the bigger it got the more of an workout it was to turn it! :-)

size 35?!? SHEESH!!! my hands would go on strike (with my shoulders right behind them on the picket line)!!!

Alright,so you started on that rug good for you!! I can't wait to see the progress through the weeks.

Did you want me to send you that sheet you liked or do you think you will use it?

What was the name of that blog you were telling me about for the hop? I am at Monkey Joes while Ayden runs around like-----well a monkey!! Thought I would check the blog out!

Love the moon flower and my daughter is loving seeing the kitty cats. They sure are great helpers, aren't they.

Oh your bag is such FUN!!! Love it, love it! That moon flower is very delicate and pretty -- and very aptly named. Enjoyed seeing all your "helpers" out and about your post! :)

The moon flower is beautiful and seems to be surviving in this hot dry weather...I've got lots of red, white and blue strips for your knitting project...it looks like the needles are short and will have to fit with the stitches to get them on. Would it make a hot pad for the table?