The big day of the baby shower (and the move) was on Saturday.
I had all my Onsie's prepped and ready to go.
I gathered up the food I needed to bring and got all the games ready too.
Here was where the food was going to go.
My SIL did a great job decorating over this table too.
Wait until you see the adorable centerpieces she made! 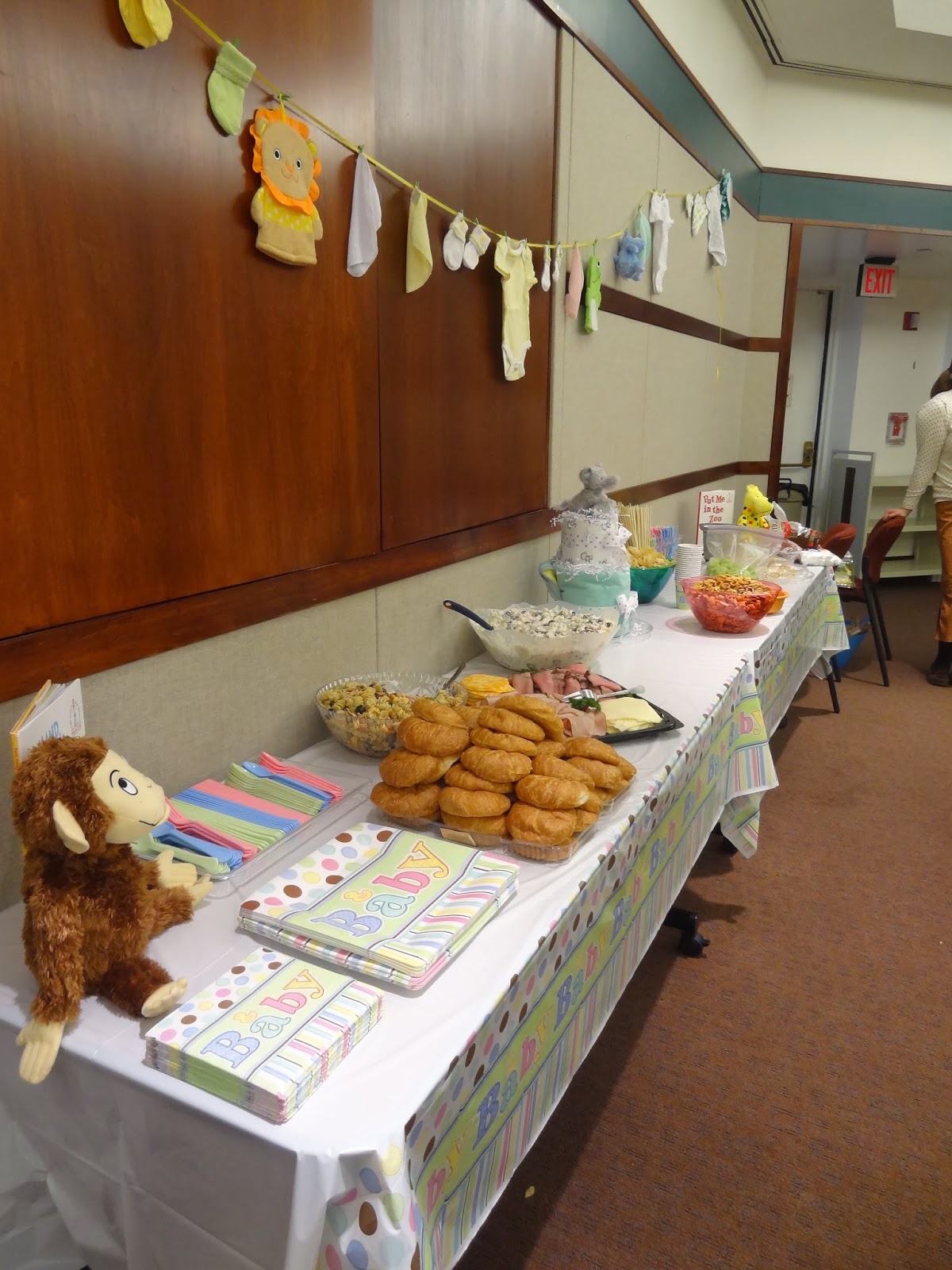 Here is a view of the room as we were setting up.
That's the dad to be in the far back.
You can see that I put each Onsie in a bag and hung them on a clothesline.
That way each applique was with it's Onsie and could be done as a little kit.
When finished each Onsie would be hung back up on the clothesline. 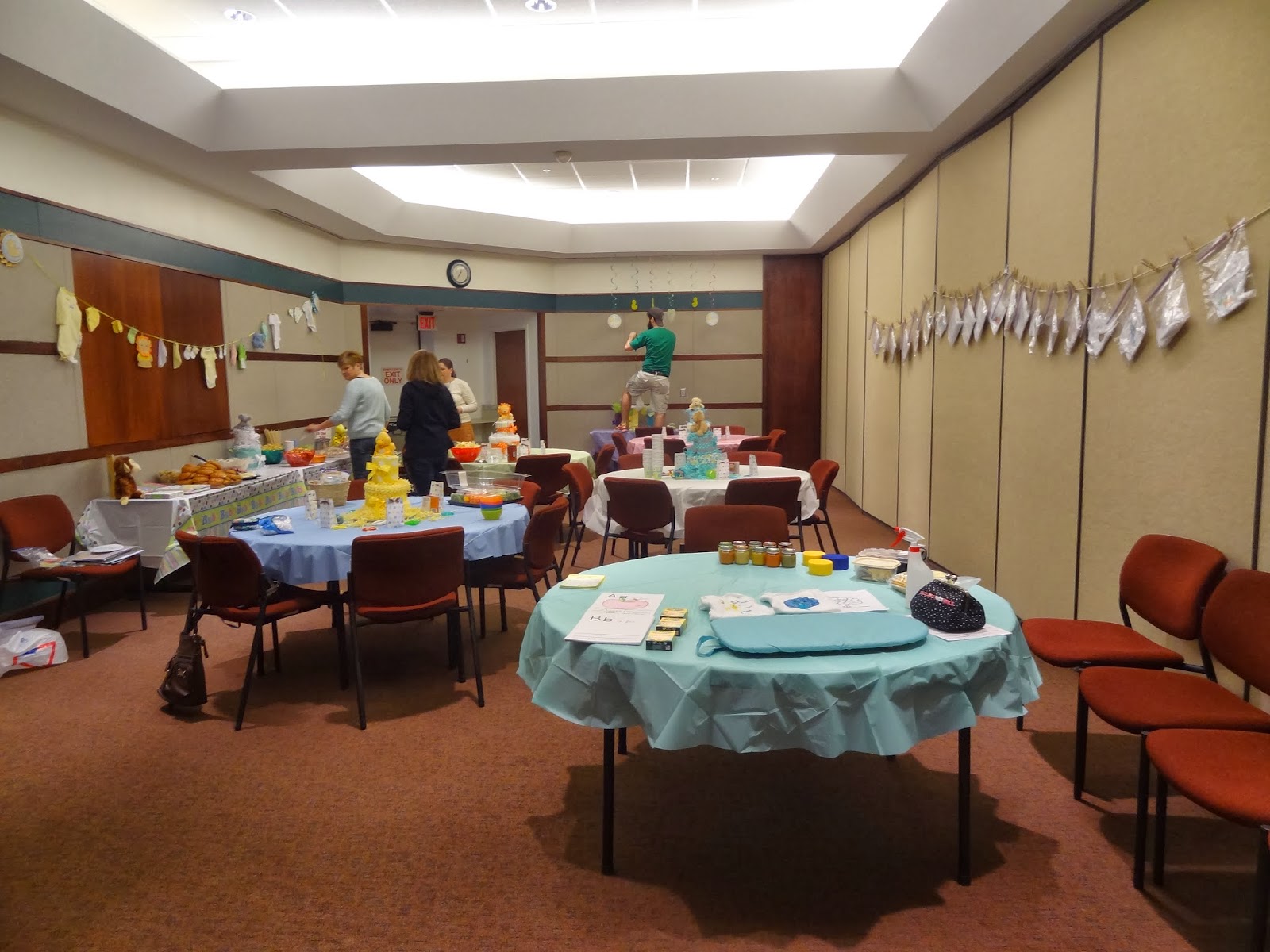 We played a few fun games.
The first one was using 10 jars of unlabeled baby foods numbered 1-10 guess what was inside.
No one got the first one...Guava!!
ahahahaha.
That was funny.
Then we had Liz (the mama to be) take a tray of items all around the room and
had everyone use their powers of observation.
After she had gone to all the tables and back out of the room,
I proceeded to ask them all about what Liz had been wearing!
More fun.
Lastly they had to use crete paper to determine how large the baby belly was. 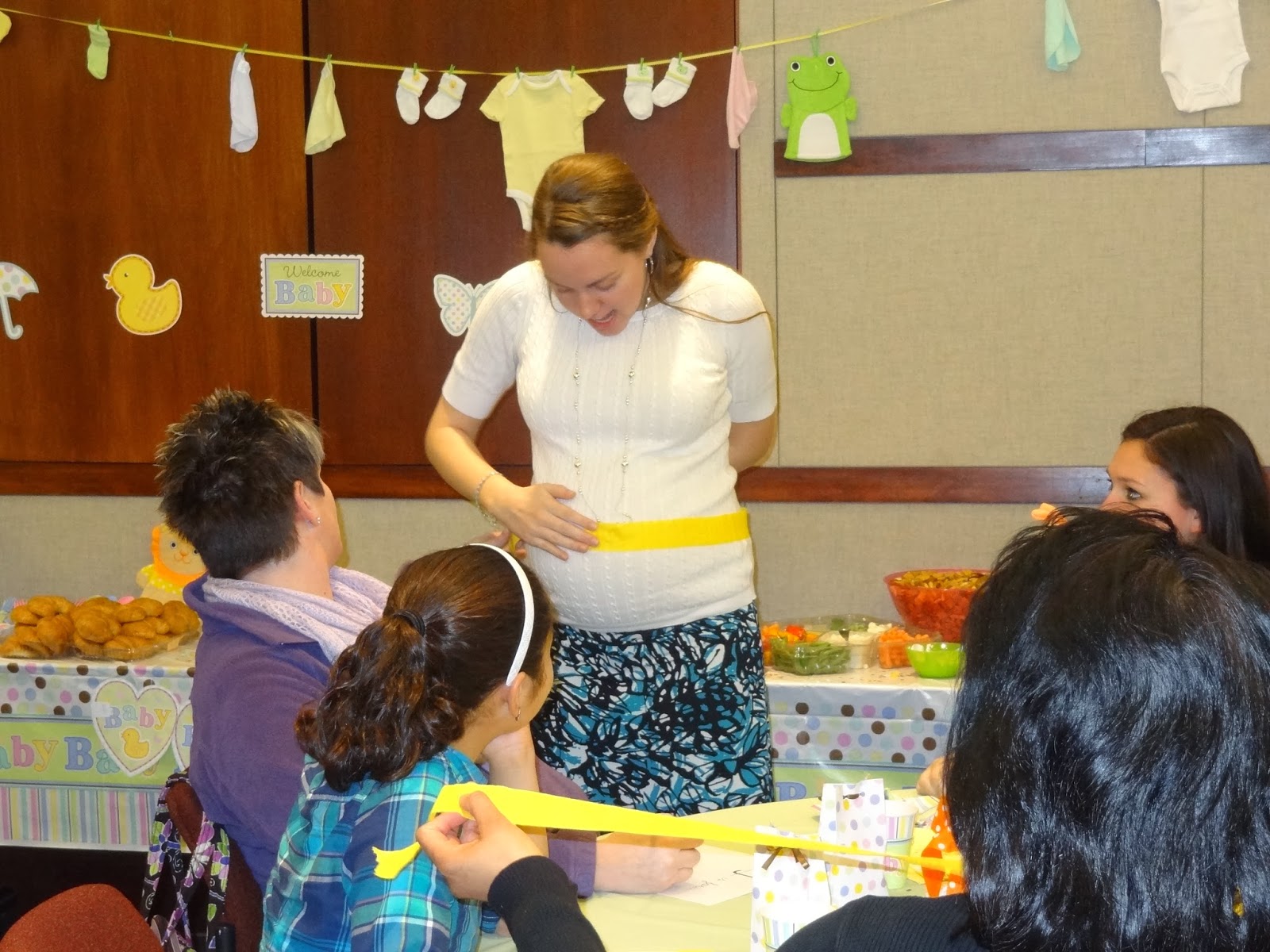 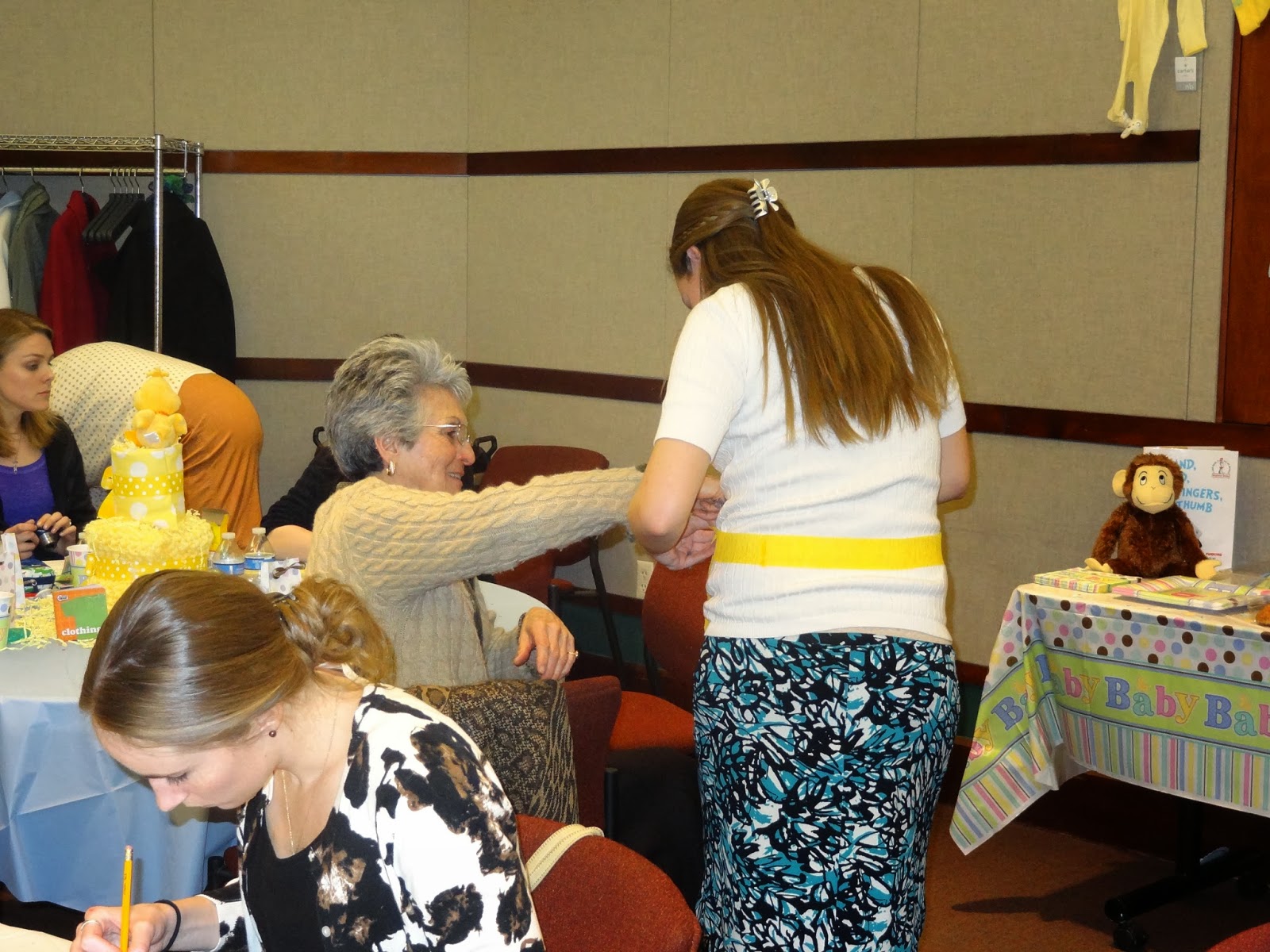 My very creative SIL made these centerpieces for all the tables.
The bottom layer on some of them are afghans that she knitted. 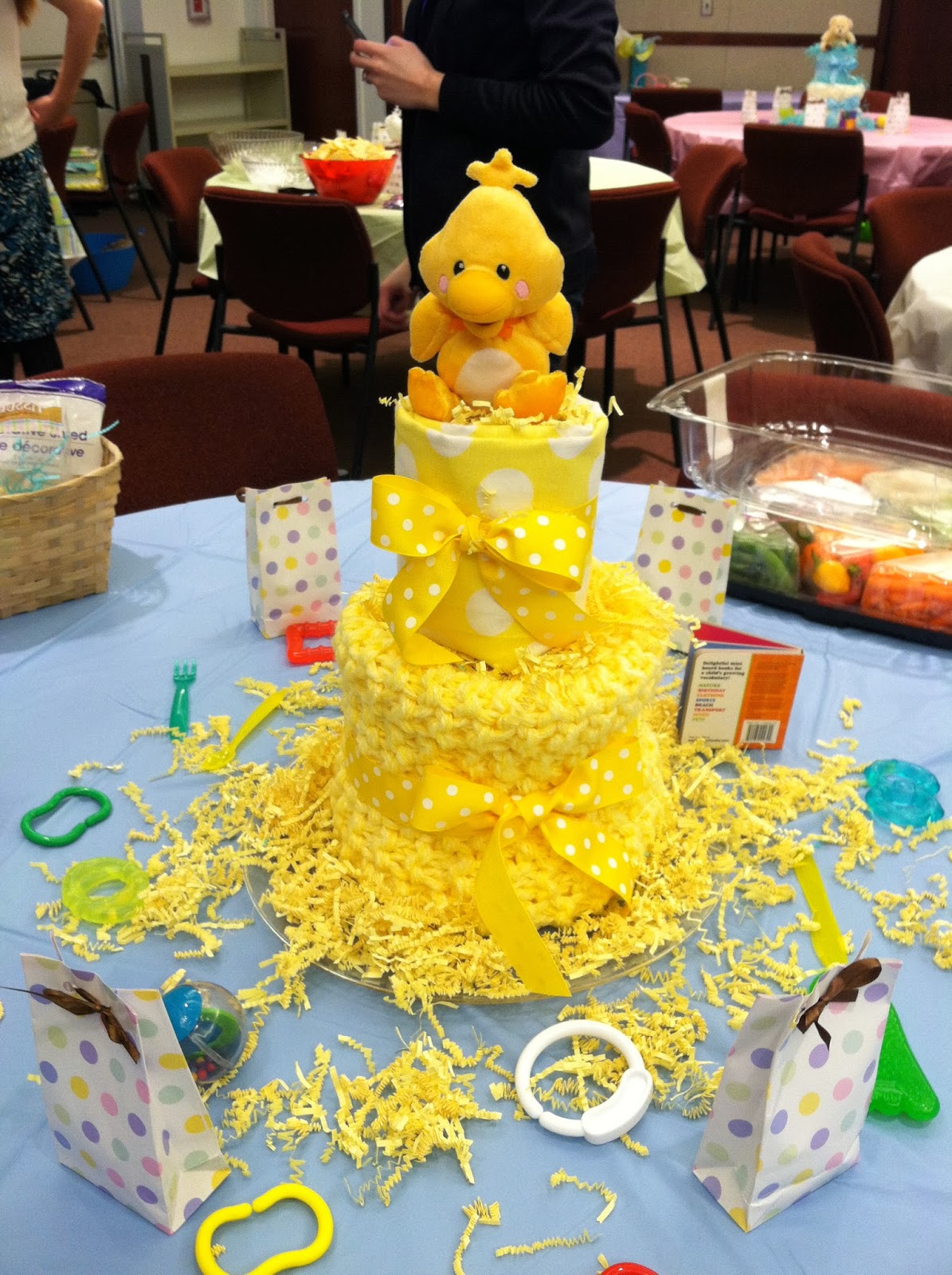 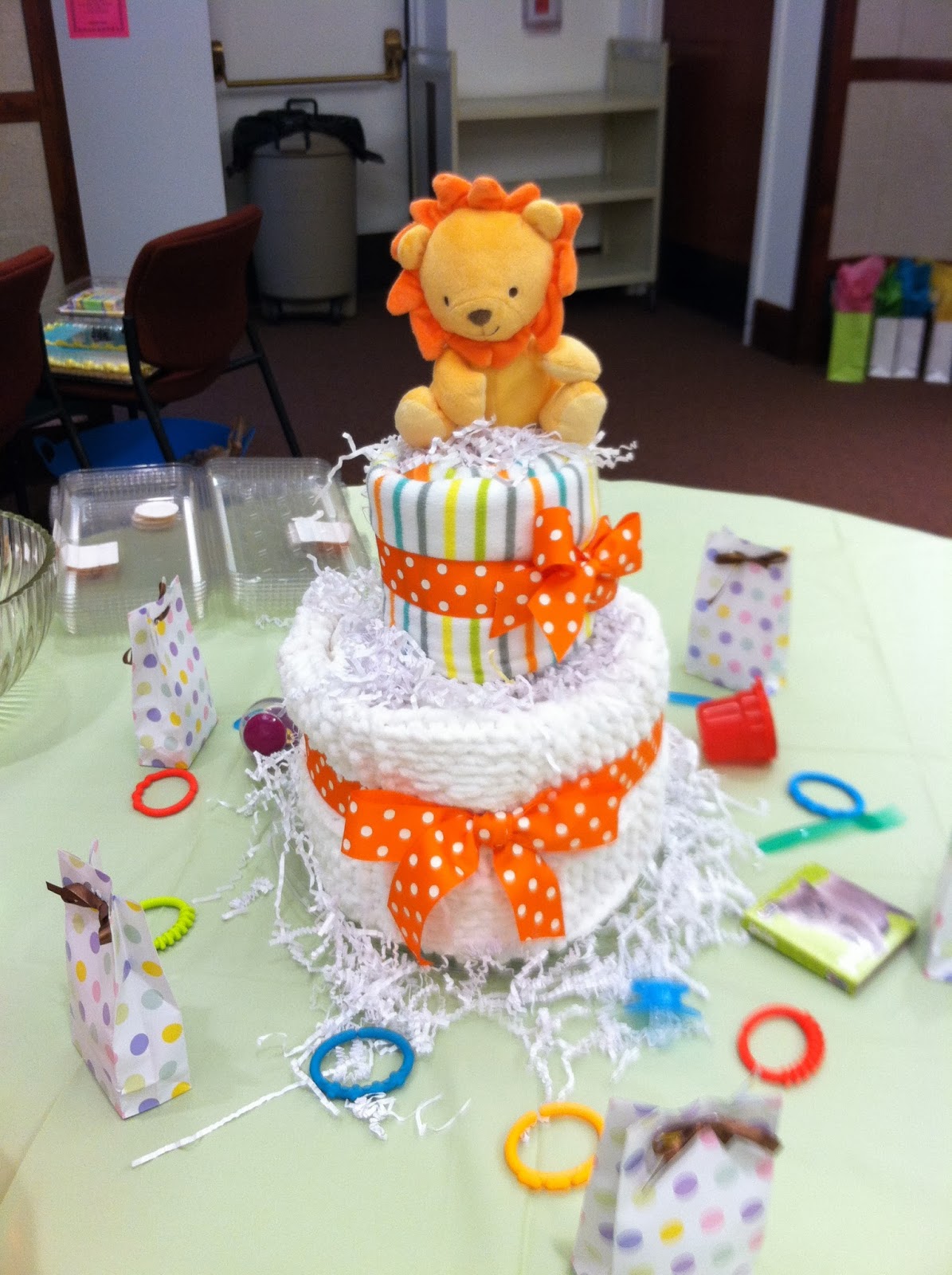 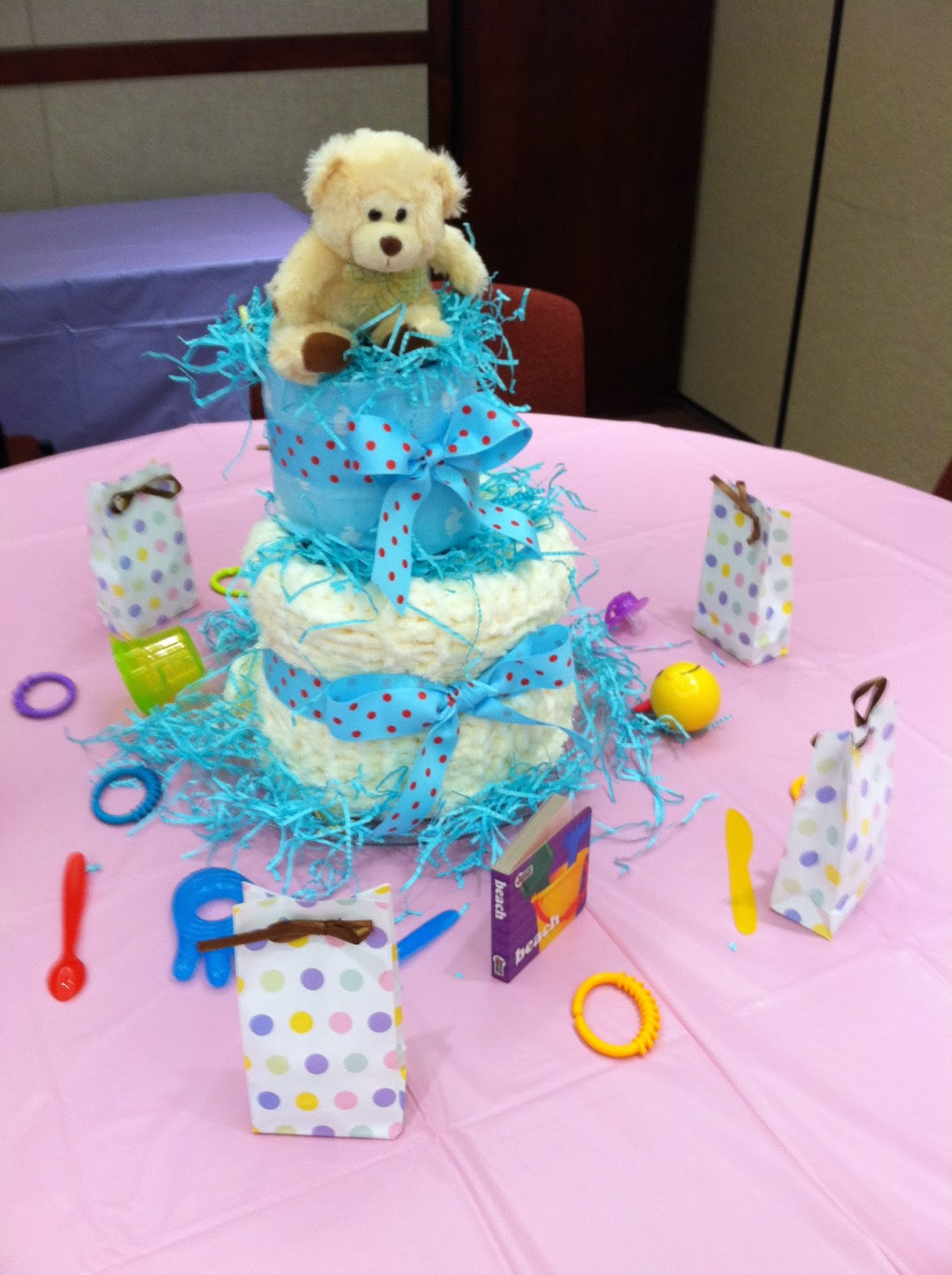 Same SIL had alphabet pages for us to draw a picture on and color.
Then put our name and what we drew.
She was going to get them laminated and make a book for the baby too.
Here is my page. 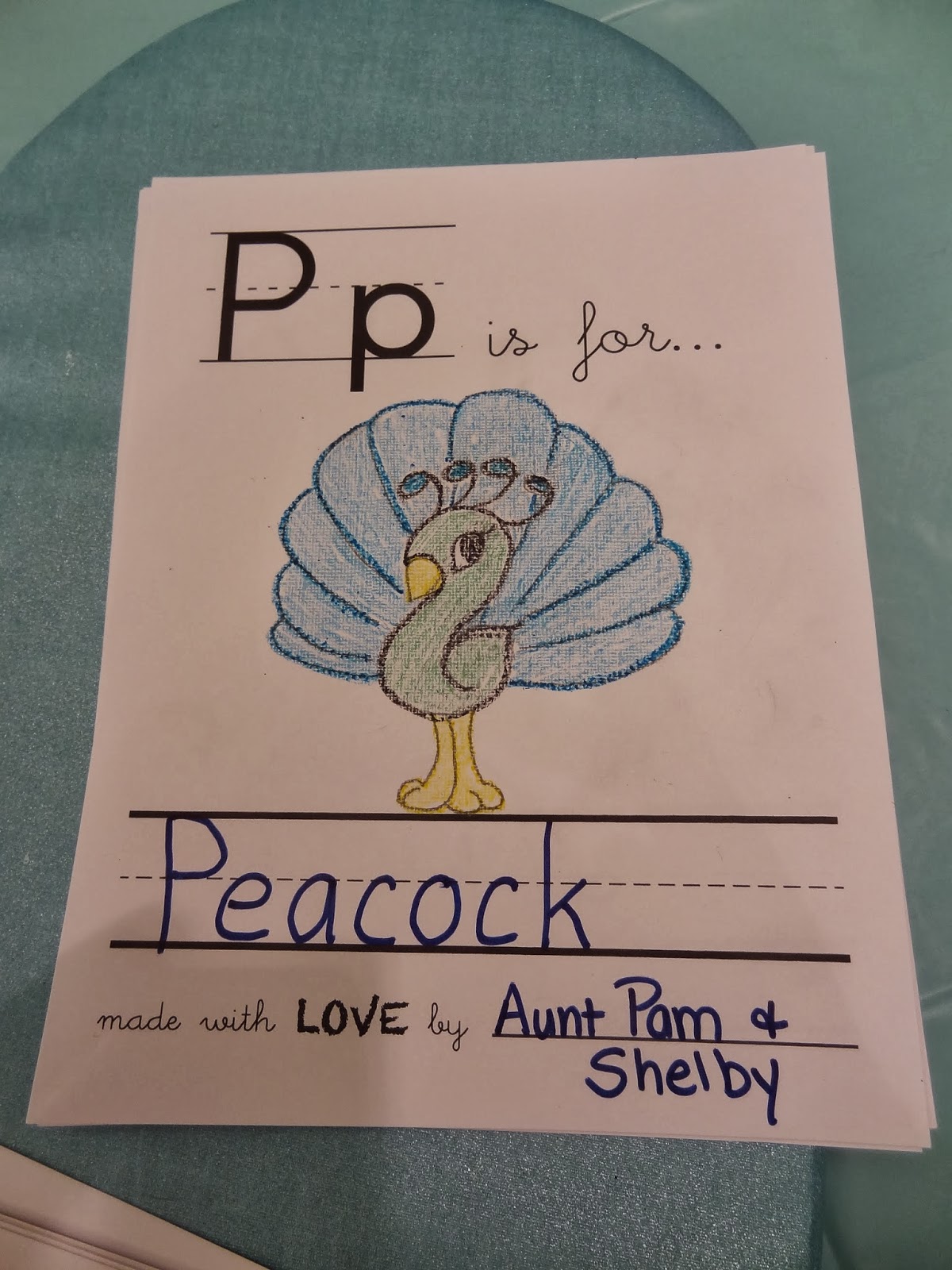 I had a little ironing board set up and everyone chose a bag and
came over to me to either build and fuse their applique or just fuse.
I made up some of both kinds.
One of Liz's friends made the jellyfish. 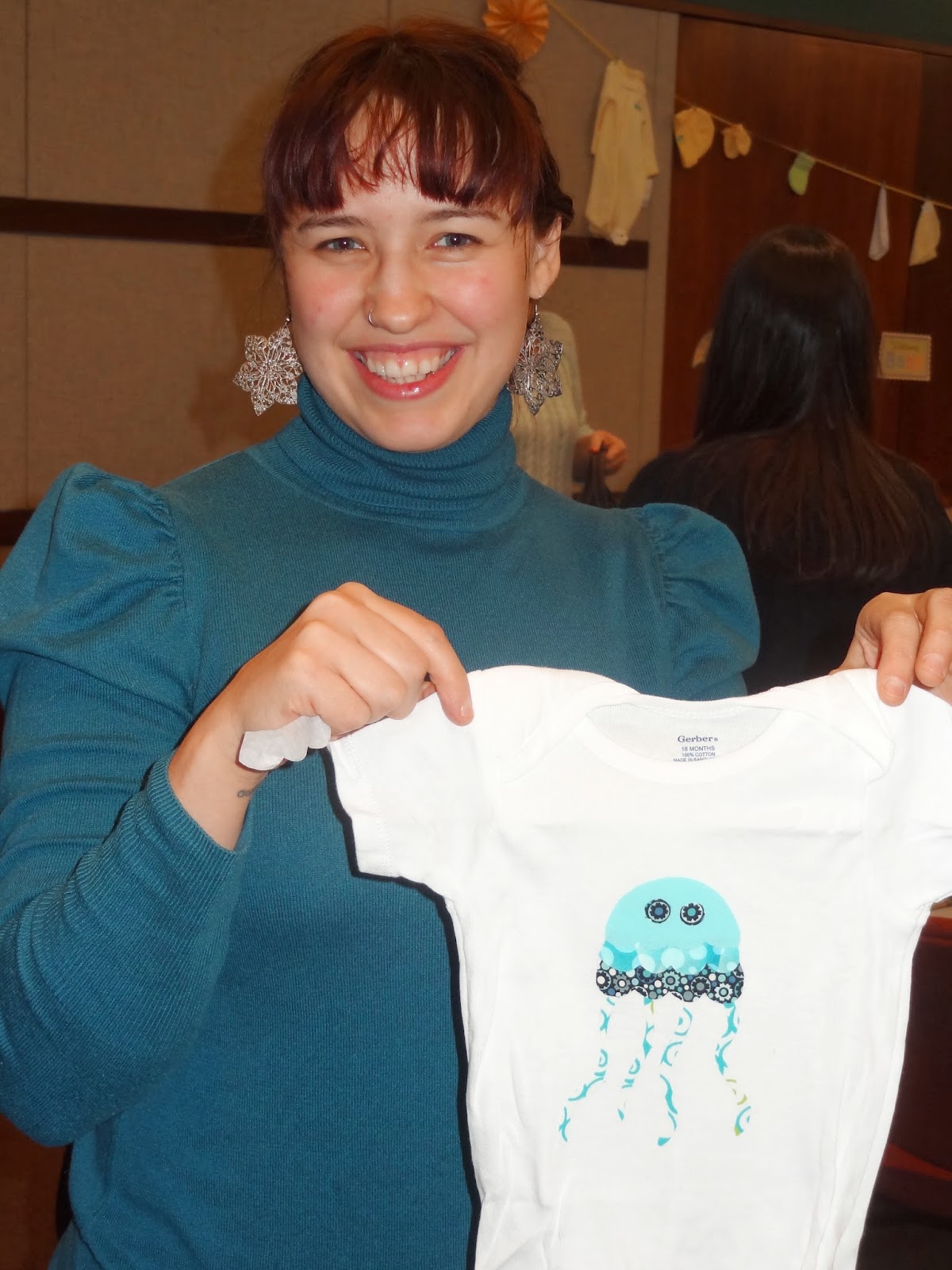 Here they are all fused and ready for me to stitch around.
The ones that were built will be cuter when they get their faces sewn on! 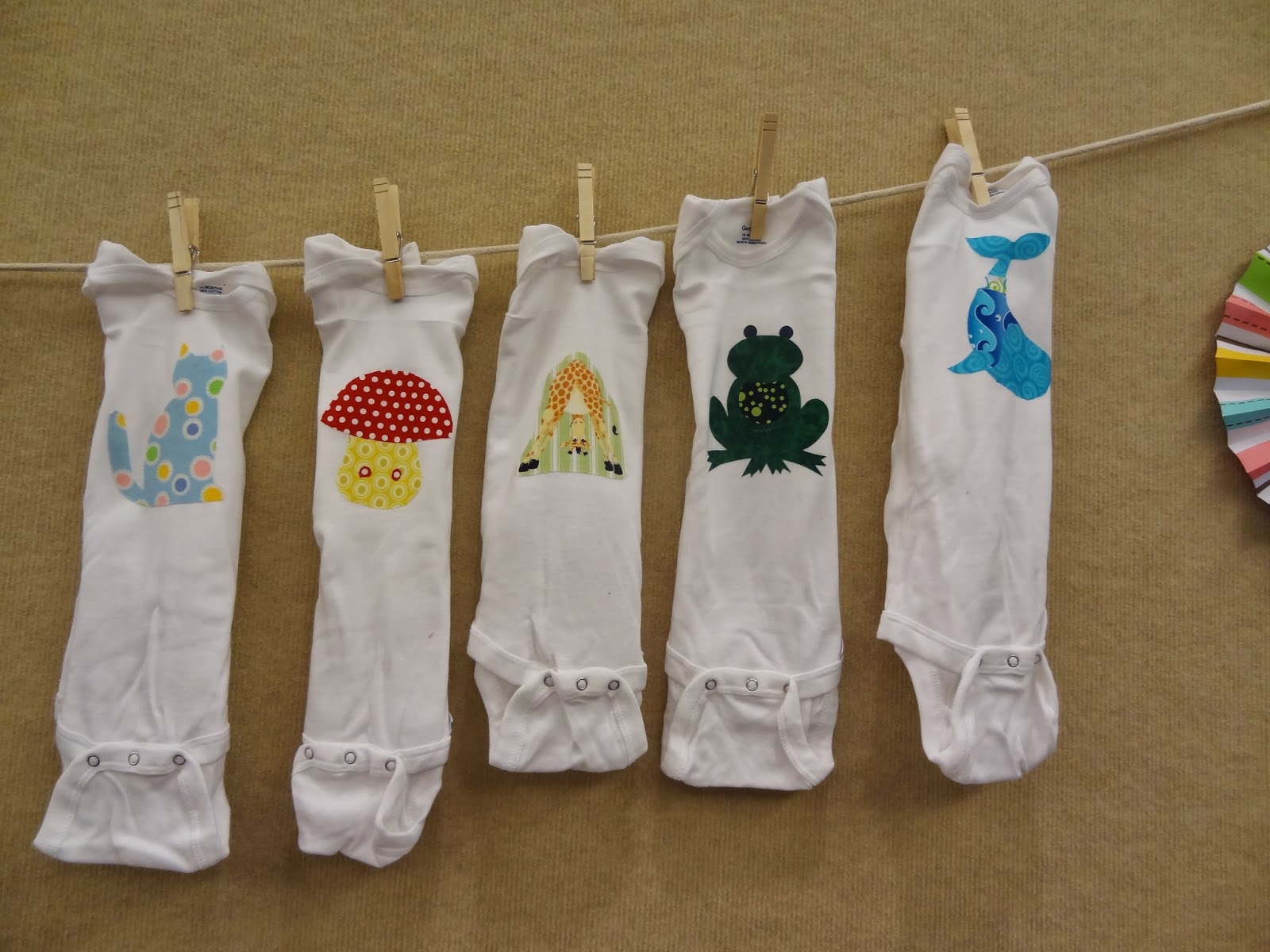 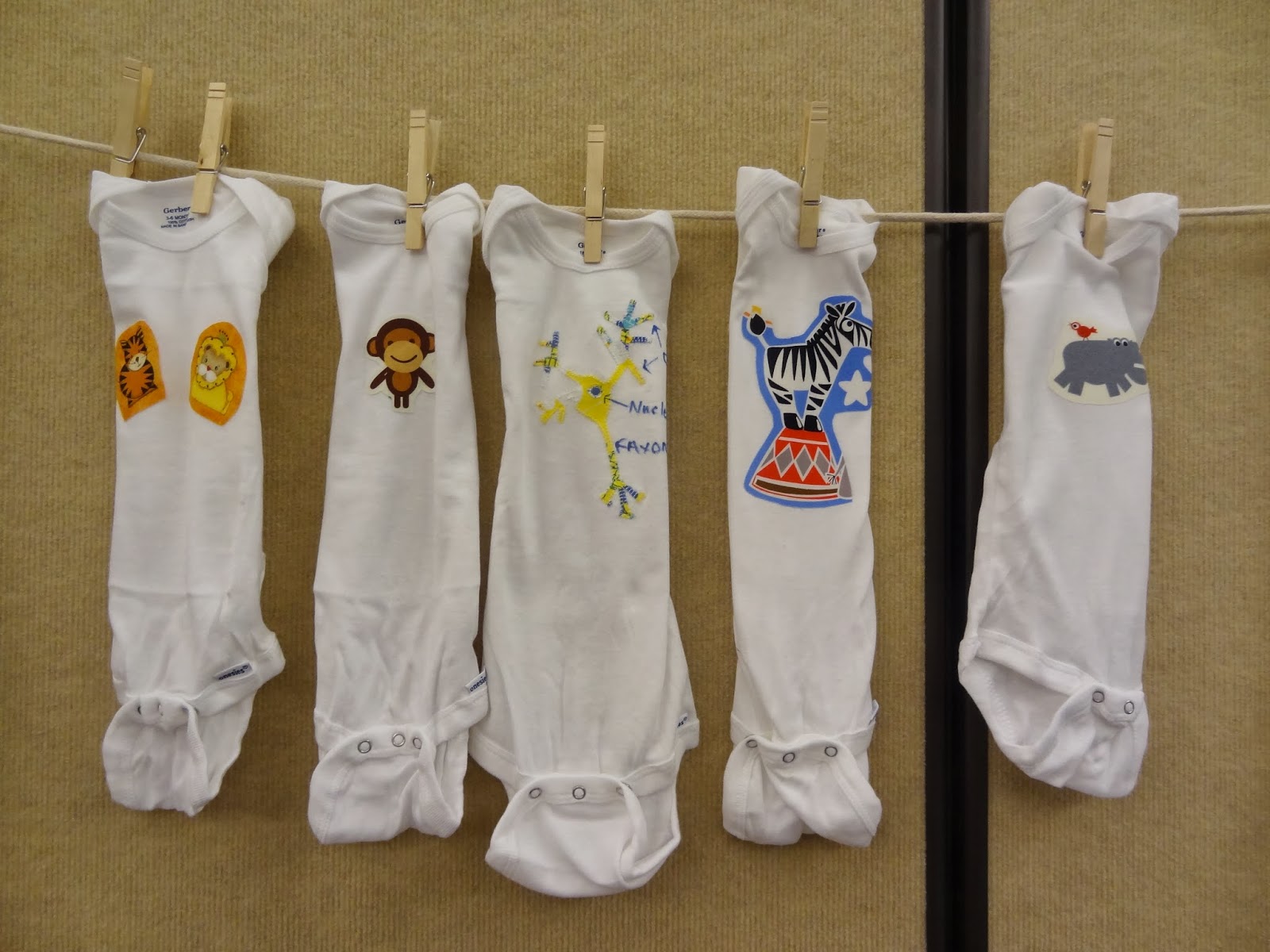 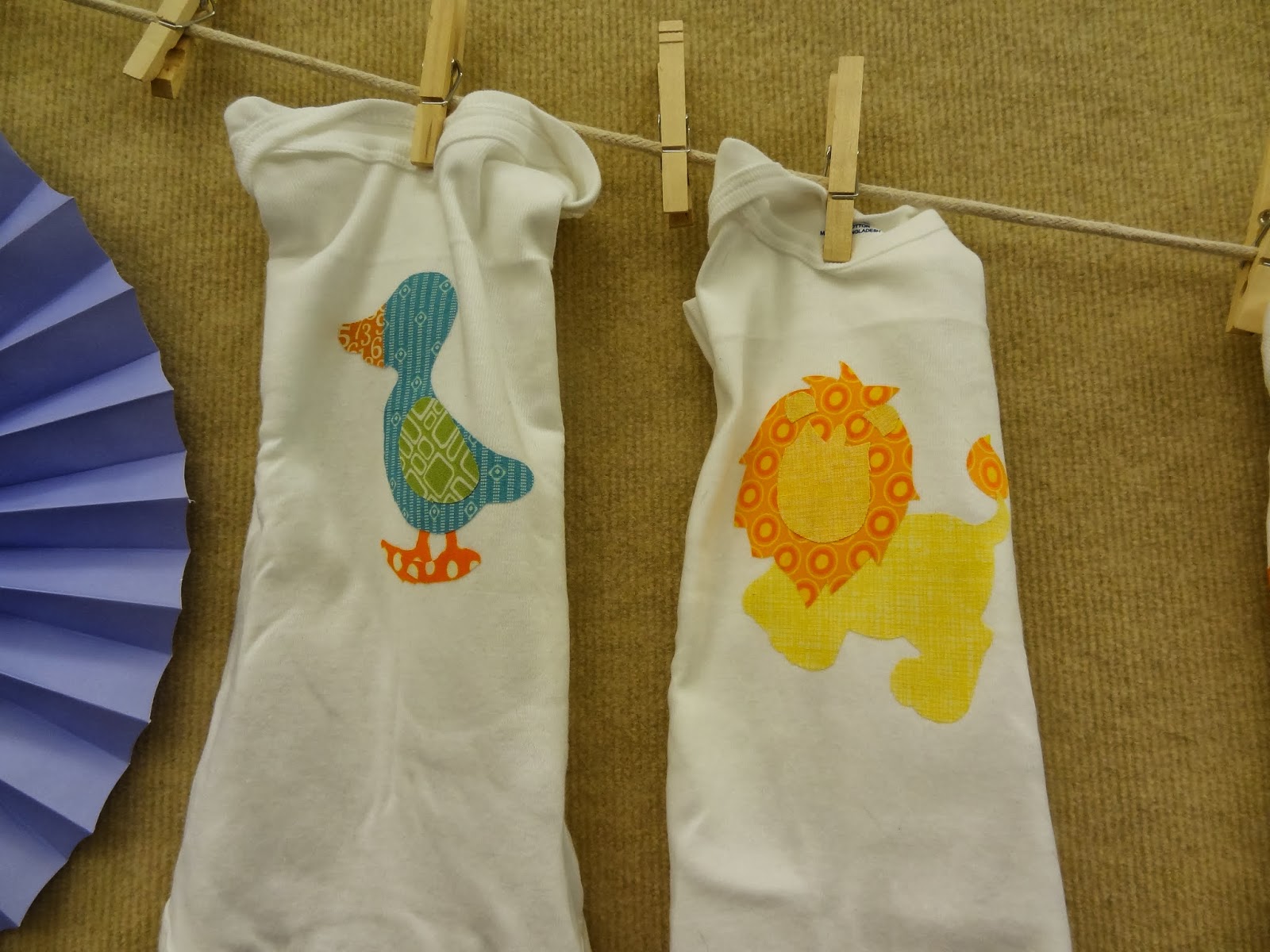 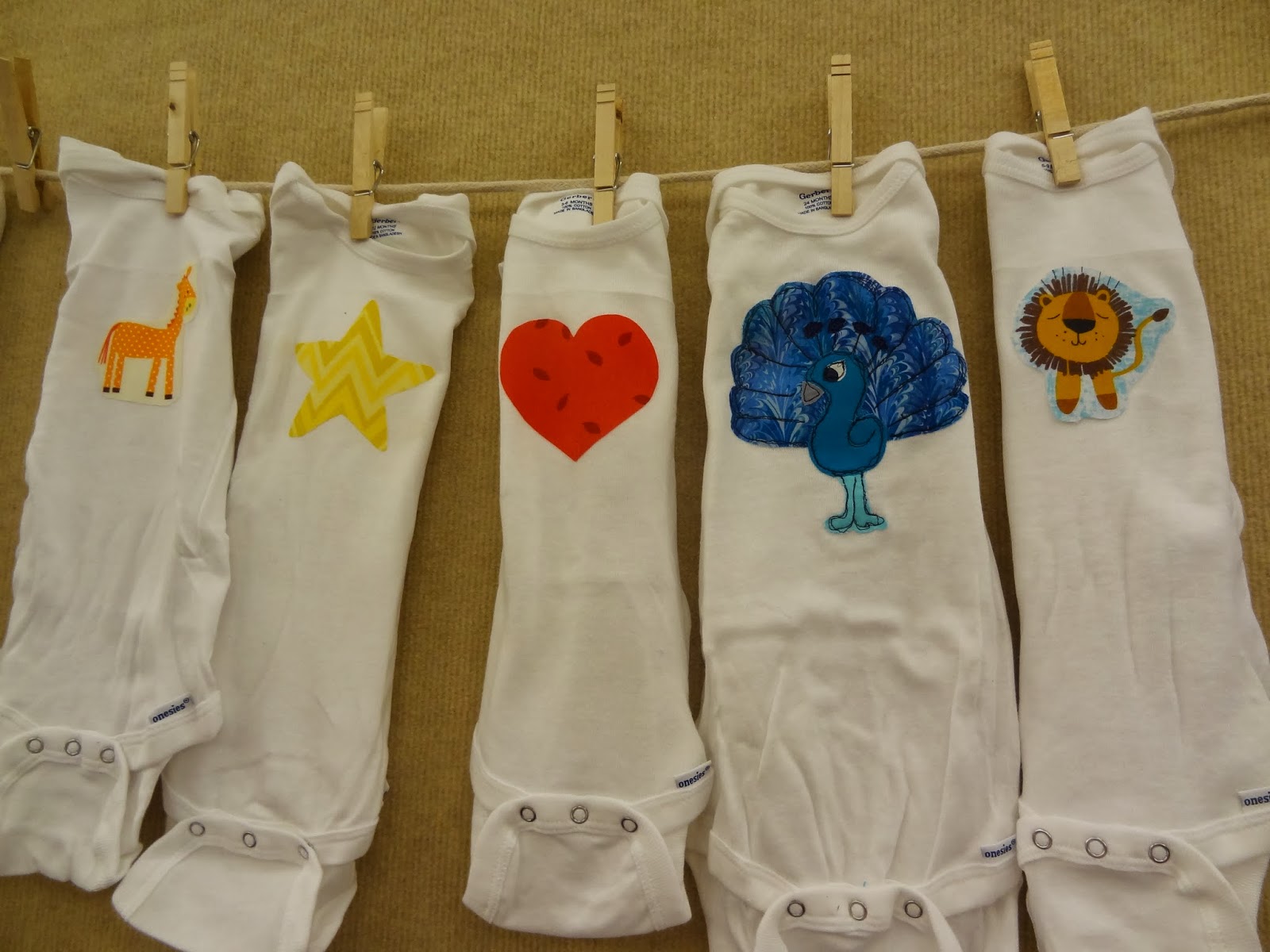 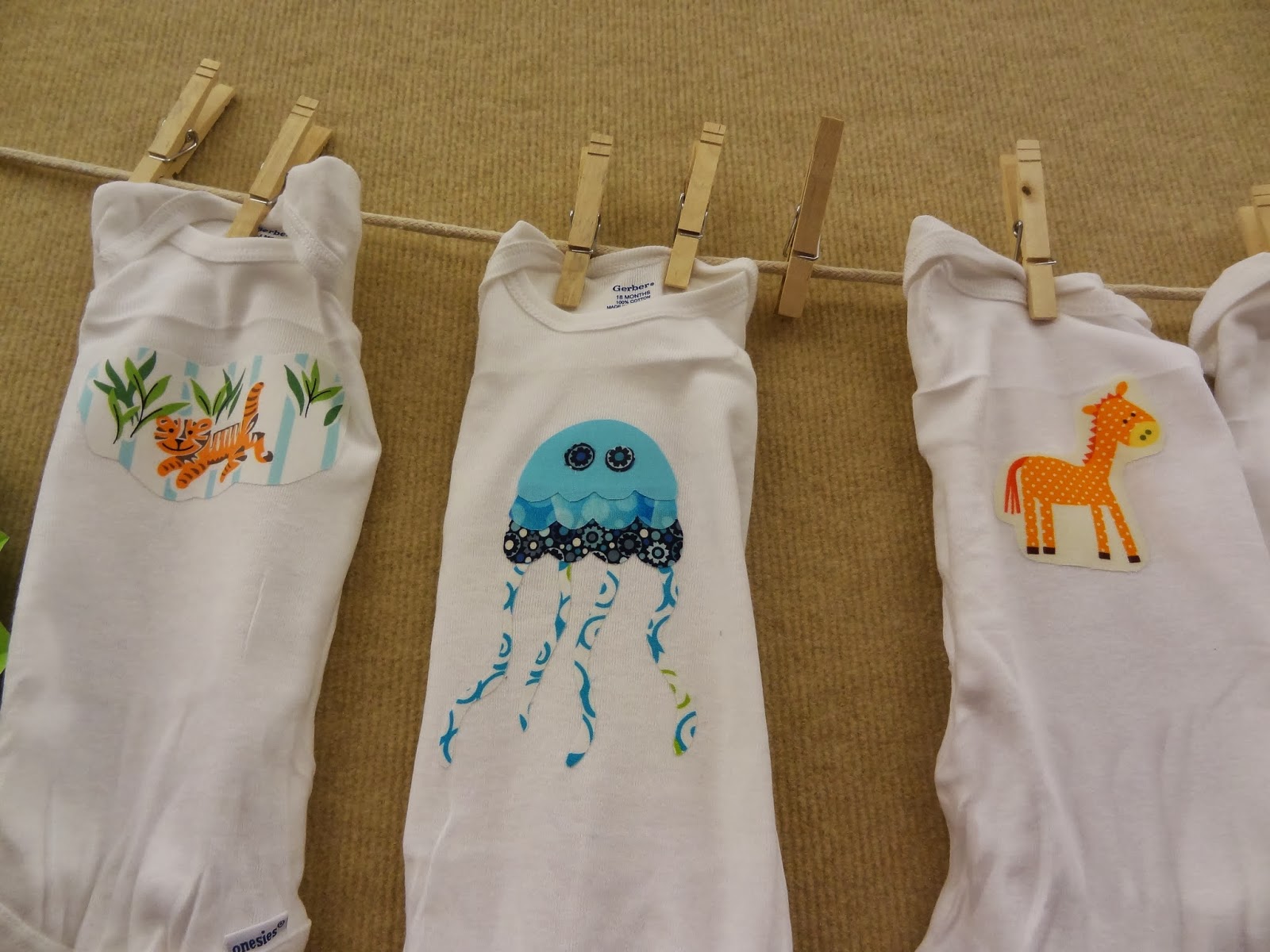 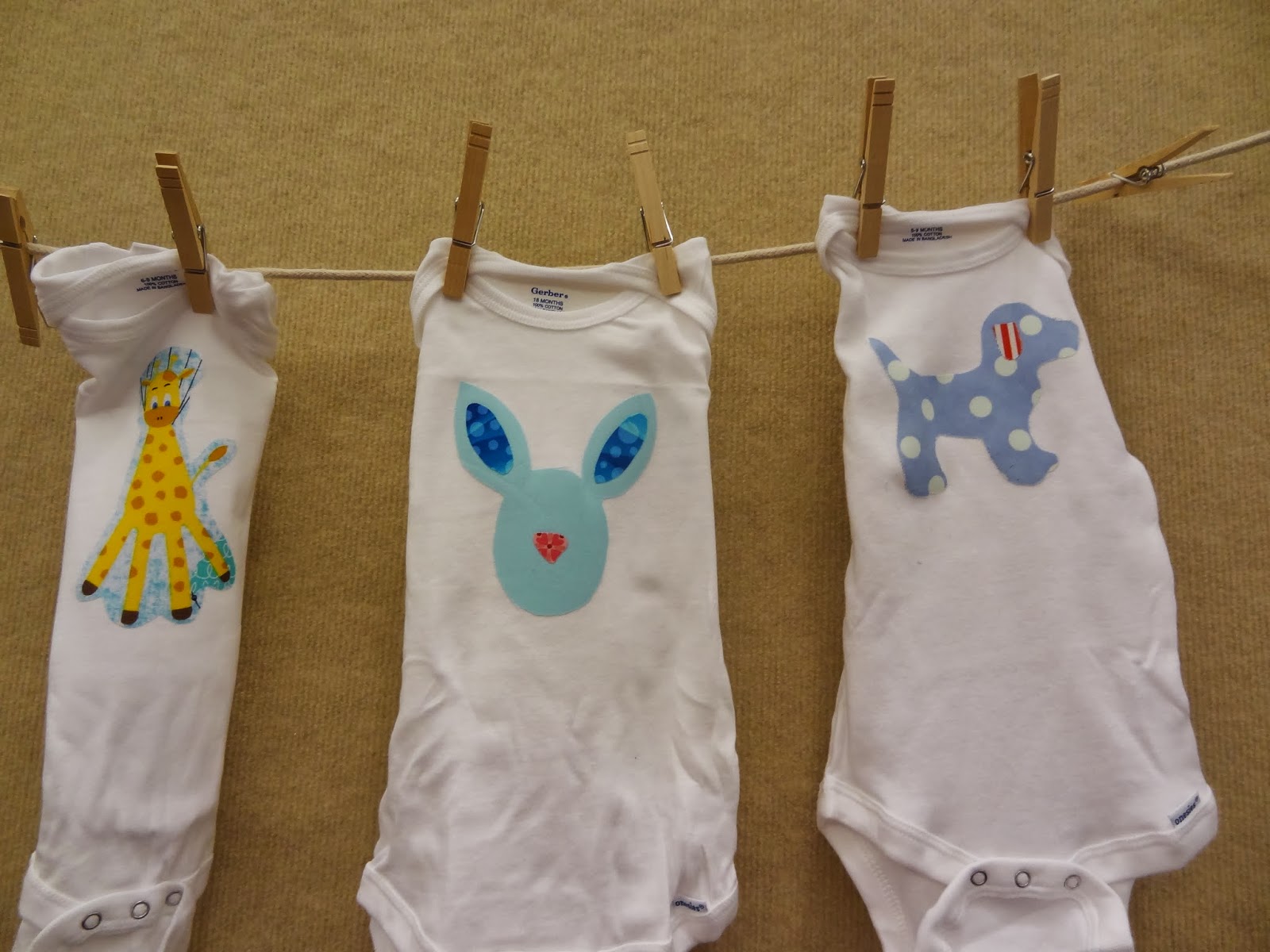 I made a chenille blanket for the baby too.
I think she liked it! Last but not least thank you to everyone for your concern for me and for my dad.
I left the baby shower and drove home to drive to GR for the big move.
It was quite a day!
I drove a car, my daughter and her boy friend drove her Jeep Liberty and my hubby
and son took our truck and the snowmobile trailer.
We made quite the caravan!
We spent the night and drove to the apt on Sunday morning to begin the packing.
Eric (BF) and I went to get the cart and
we had just gotten back into the apt when we were told the elevator had stopped working.
OMG how were we going to move an entire 2 bedroom apt on the second floor with no elevator??  Those three guys carried every single box down the stairs and into the vehicles.
Meanwhile all the elderly of the building were stuck on the first floor as they can't do the stairs.
Since we didn't know how long that would be my hubby told my daughter to t
ake Gizmo (her peacock) down stairs and entertain the masses.

Meanwhile more packing and carrying of stuff.
At some point (in the million degree apt) we were down to the furniture.
What to do, what to do?
Thank God the elevator got fixed!
Seriously I offered up a prayer at this point.
We got all the big items downstairs and loaded up.
Last to load was my dad's chair.
We put the peacock in his lap while we were packing and the both fell asleep.
Dad and bird had a BIG day! 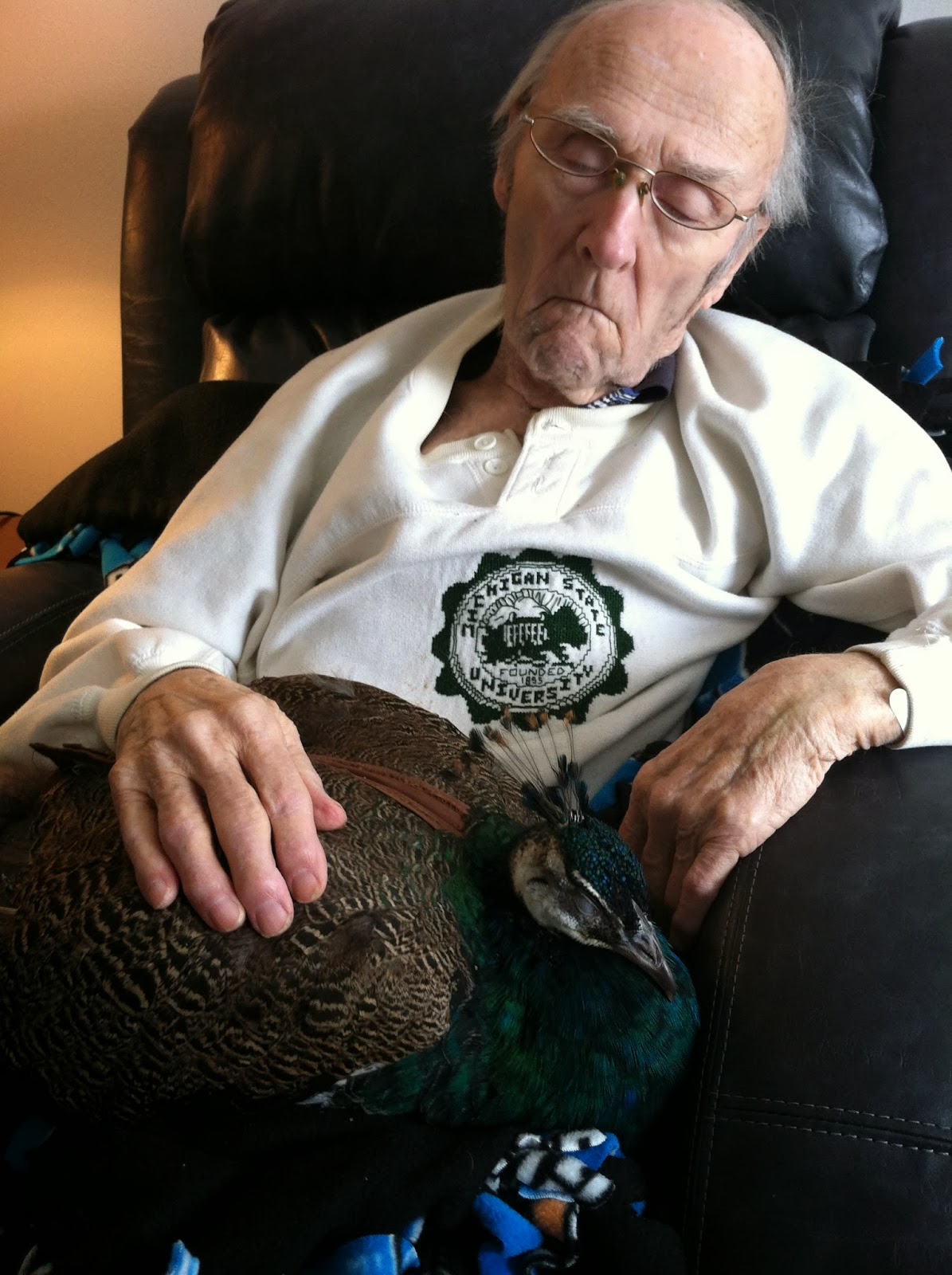 After we finally got on the road we were about 20 minutes into the 2.5 hour drive home
and he asked me if we were there yet!
When we finally arrived he told me it was a million miles away and
he didn't think we would ever get there!
As it turns out the boxes I needed got packed first so he had shirts but no pants!
I still have to get to all those boxes but I went shopping in the mean time.
I have been over to his new place the last 2 days after work and he is settling in quite nicely.
He likes the people and the food, which is good.
He told me yesterday that whenever he needs/wants something someone immediately gets it for him and he really likes that!!!
So fingers crossed this will be a good move for everyone.
He did ask me how long he has to stay here.
I told him forever.
Hopefully that's ok.
I am looking forward to being able to see him more and spend time visiting rather than running around and cleaning and doing errands.
(See his shirt?  I cross stitched the MSU emblem on it)

I appreciate all the support I have received from all my online (as well as my real life) friends.
I will keep you posted.

What a sweet photo of your dad and the peacock...it made me smile. I'm glad to hear he's happy in his new surroundings. I hope all goes well for y'all.

Bless you. This post shows how much you do, and how much you mean, to everyone in your family! I pray this life change will continue to be nothing but successful for your precious Dad. The onsie idea is genius and the photo w/ the peacok is the absolute BEST! Hugs to you, Pam~

Wow. It sure was some huge weekend for you but I'm glad it all went well. Enjoy having him closer and hopefully it will make your life a lot easier.

Oh my you sure have been busy! The onsie's way a great idea! How fun! And the picture of your dad and peacock, that is a great picture for you to have. Glad it sounds like he will settle in fine and that your time with him will be so much easier.

So glad to hear the move is over...hopefully each day gets easier for you and your Dad. I think he will settle in just fine and he will be happy especially with more time spent with you, Chris, Shelby and Thad...home cooked meals at the Lincoln's will make him smile and you too!!

What a fabulous job you did with the onesies! I don't know which one is the cutest they are all so cute!
Glad to hear all went well with Dad :)

What a fun shower! So much preparation and love put into it.
Dumb question, but how do you sew around the edges when there is a back to the onsie? Is it hard to finagle it around your sewing machine?

Wonderful photo. So glad he's liking where he is and it's easier for your to visit him.

How wonderful that dad is settling in! I am so thankful. Cute shower centerpieces, and the onsies are going to be one of those gifts she will absolutely adore.

looks like a fun shower and I can't believe you have a peacock! what's the story with THAT one?

I love Liz's face when she received the quilt priceless!!! What amazing center pieces for the tables---so cute and ya'll did a fabulous job with the shower.

Your dad is so cute in his chair with the peacock and I am happy to hear that he is blending in well at his new place.

God bless you! I know it was tough to make the decision to move your dad and even harder to get the task accomplished. I think you made the right decision and your dad will enjoy having you visit him so often.

Your are a blessing to your father! Since I was little I have been around elderly relatives in various types of nursing homes. You will be able to enjoy your time with him so much more now!

can see a good time was had by all at the baby shower. So good you have Dad near you now, it will be lovely for him to see you more often and so good that he has settled in straight away.. What a ghastly removal you had but somone was watching over you to get the lite repaired before you moved the furniture

That picture of your Dad and Gizmo is precious :). So much work that you and your family have done over the past year! Glad he is closer.

The onsies are ADORABLE! What a cute idea for a baby shower! Loved the table decorations as well.