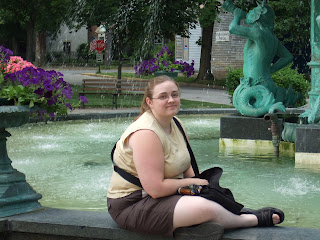 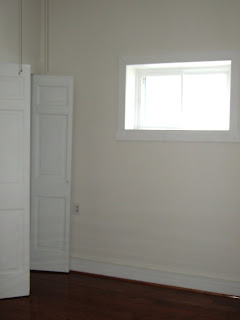 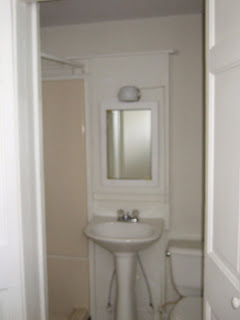 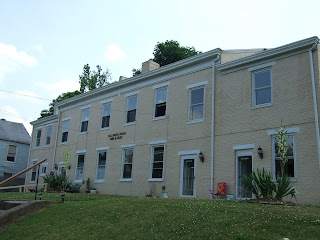 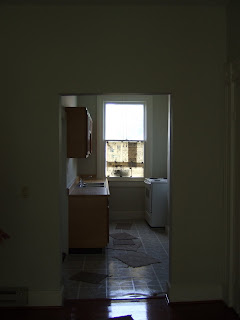 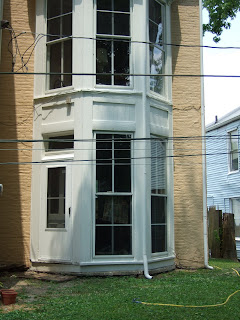 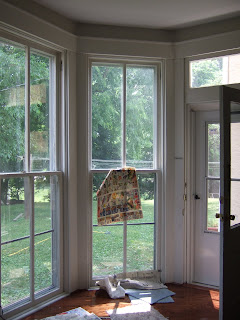 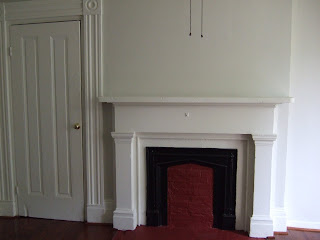 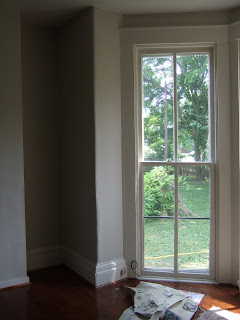 These are pictures from Shelby's new apartment in Madison Indiana. We went down with her last week to try to find her a place. Having a cat made finding an apartment a challenge! Finally, after many phone calls, visits and LOTS of driving around we found this one. It is in a mansion built in 1839 that has now been turned into 7 apartments. The front of the complex used to be the back of the "house". So the large bow windows are looking into her back yard. The landlord still has some things to finish, lake an AC unit and a patio, but the brand new hardwood floors are great. It is just one bedroom and doesn't have a lot of storage built in but it is a good place for her. It is one street off the main street in Madison. Madison is 130 blocks of declared Historical District so you can imagine how quaint it is. Lots of antique shops too. Its funny but she is one street away from the quilt shop, it is almost directly behind her! Of course I *had* to visit Margie's Country Store. It was a smallish shop but they had a lot of nice things and the ladies were very nice. We told Shelby that everyone knows your business in a small town and she got to see first hand how friendly everyone was to her. She went into the local jewelry store to have a tag made for her cat and now has 2 new friends (the owners) who told her to come see them if she needs anything. Actually several shop owners told her this and offered their home phone numbers.
The photo of Shelby is in front of the fountain about a block from her apt. We still need to pack the rest of her things and actually move her stuff to IN but she took what she needed to at least live for a few weeks. DH is a pilot for a private company and he had an overnight trip to Indianapolis on Mon, so he took her bike, her printer, a radio and a box of misc. "stuff" and dropped it off in her car at the school where she is working. She called me on Mon before she went into the school. She was supposed to be there at 9am and was already there at 8:30, and she is NOT an early morning person. Just excited, I think. We are so proud of her and excited to see her spread her wings.
When she was a little girl she gave my DH an empty box with a note telling him that because he is gone so much she knew that he would miss home and be lonely. So she blew in kisses and hugs so he could take the box with him and never have to miss them. Well, he remembered and bought her a box with some IN stuff on it. I wrote her the note telling her not to be lonely that we are just a phone call away and that whenever she was missing us the box was full of our kisses and our hugs! We cried when she read it. It is bittersweet as the mama watching the fledglings leave the nest, but I hope and pray that she will spread her wings and fly as we have prepared her to do.
I still have more SF pictures but this was more important right now. How did you feel when your DK's left the nest?

Now I'm crying!! It's not easy, I know... but there's nothing more fulfilling than being so blessed to see your own children living, and happy, on their own, feathering their own nests. Life is good.

Our youngest was ten years younger than his next sibling, so basically an only child for many years. I cried and was sad a lot, but slowly, felt the new "freedom" DH & I enjoyed was a good thing. Her place looks very nice.

We've had boyz around for 26 years and don't know what's it like without a housefull for supper. Our are so spread out, we'll have extra (big) feet under the table forever!

The apartment is really nice....glad you found a kitty-friendly one.

Your SF pictures are really pretty. That's one of the places I'd like to visit......someday!

Thanx for visiting my blog--come back anytime!