I was going to say that I got all my UFO's and WIP's finished but
then would have to say April Fools!!!
I did manage to get the entire purple and gray quilt top finished.
I even got a friend to take some photos, but I don't want to show you the top
and eventually the finished quilt, until after the wedding (May 9th).
So what can I show you?
How about some progress photos and some design decisions as I was working on it?

Originally I figured it would finish at 98" x 98" but then folks were telling me a king was 104" x 104" so I decided to sleep on that and see what my resting brain could come up with.

The rows took quite a bit of time to assemble as there was a lot of matching! 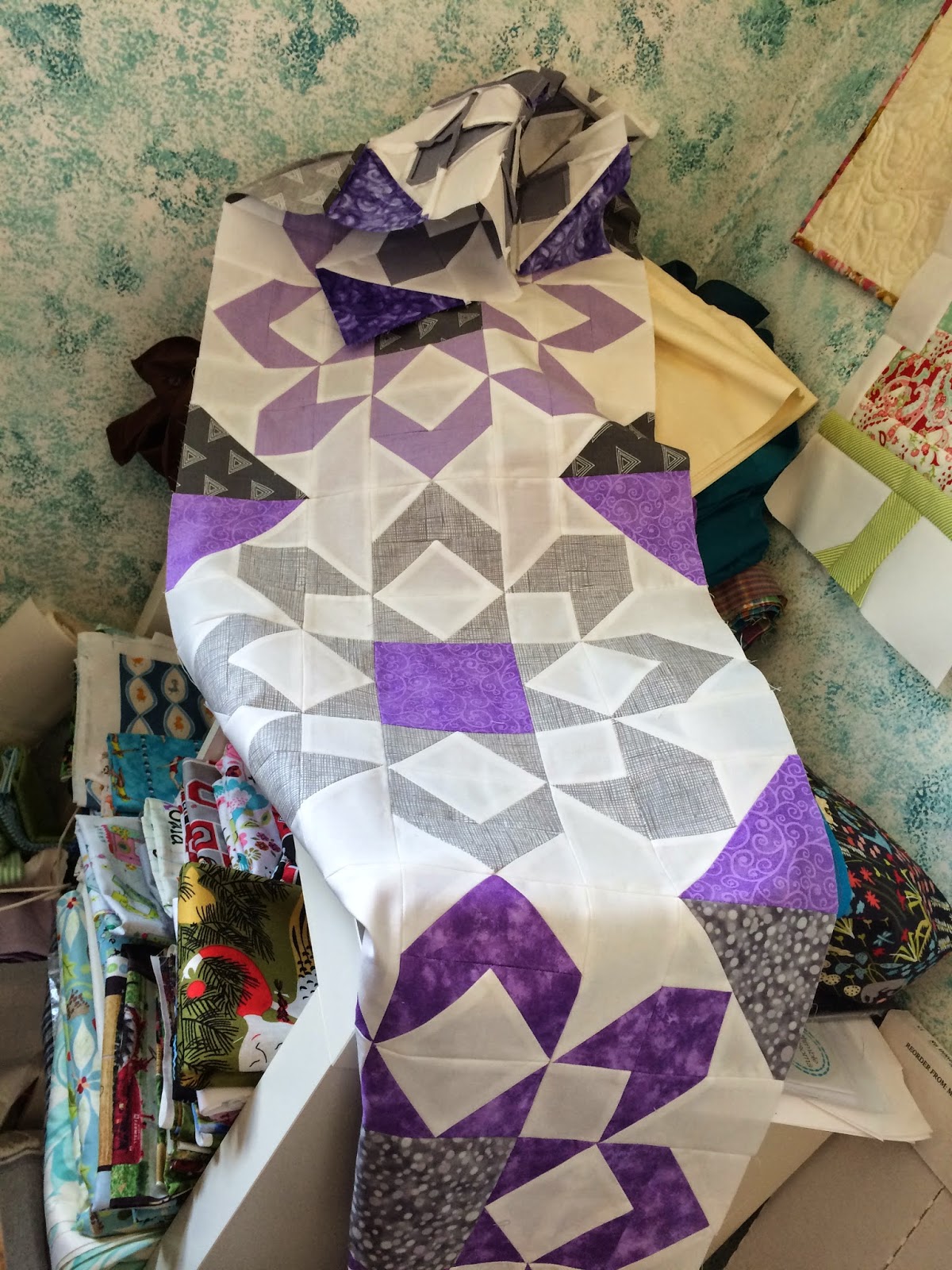 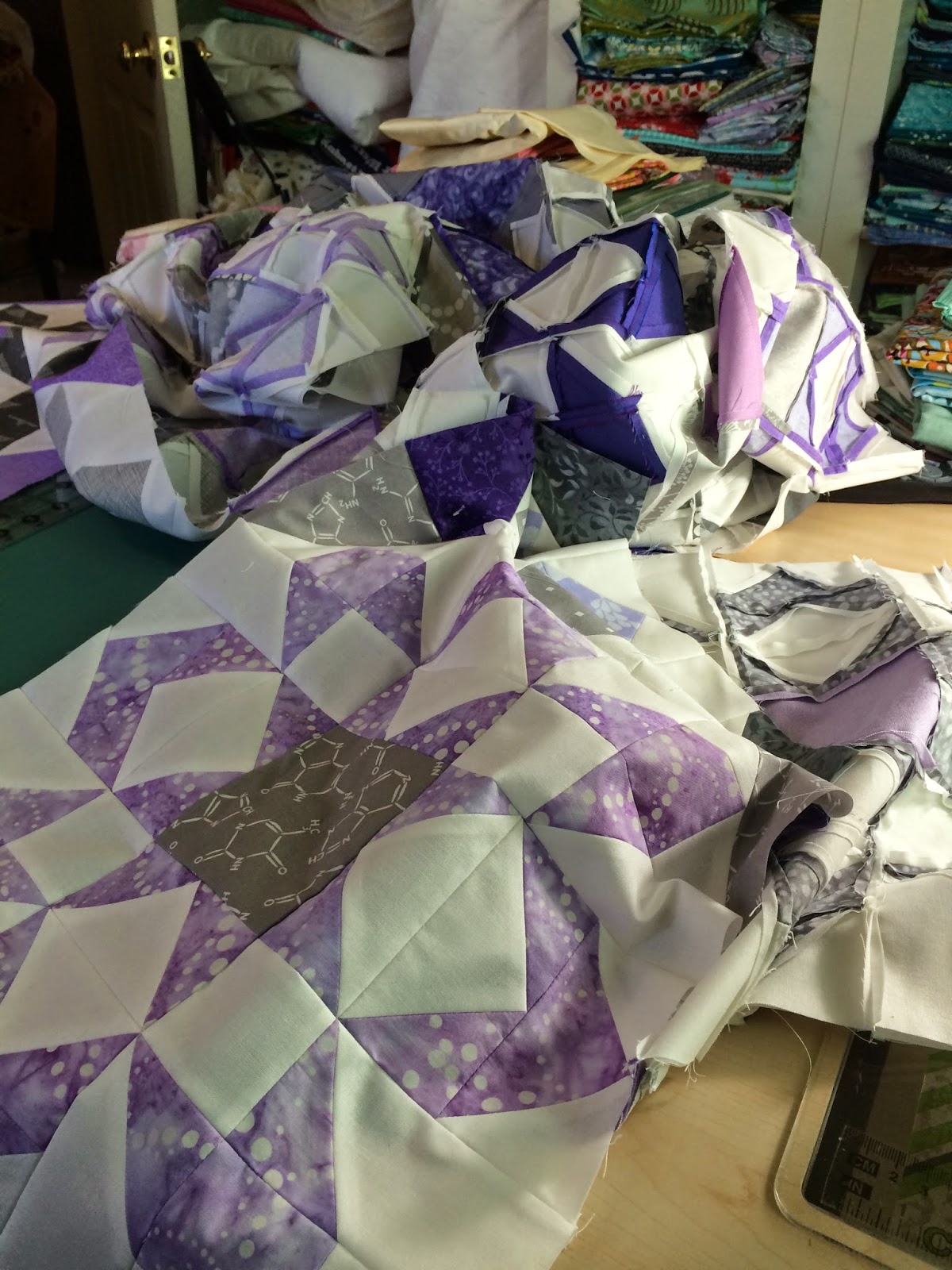 My fabulous helper cat was helping me decide on the border width.
Originally I was going with a 2" white, then a 1" gray followed by a 6" white.
That would have made the quilt 98" x 98".
When I posted on Instagram they said a king should be 104" x 104" so I had to re-think the border.  I didn't want to just add more white to make it larger. 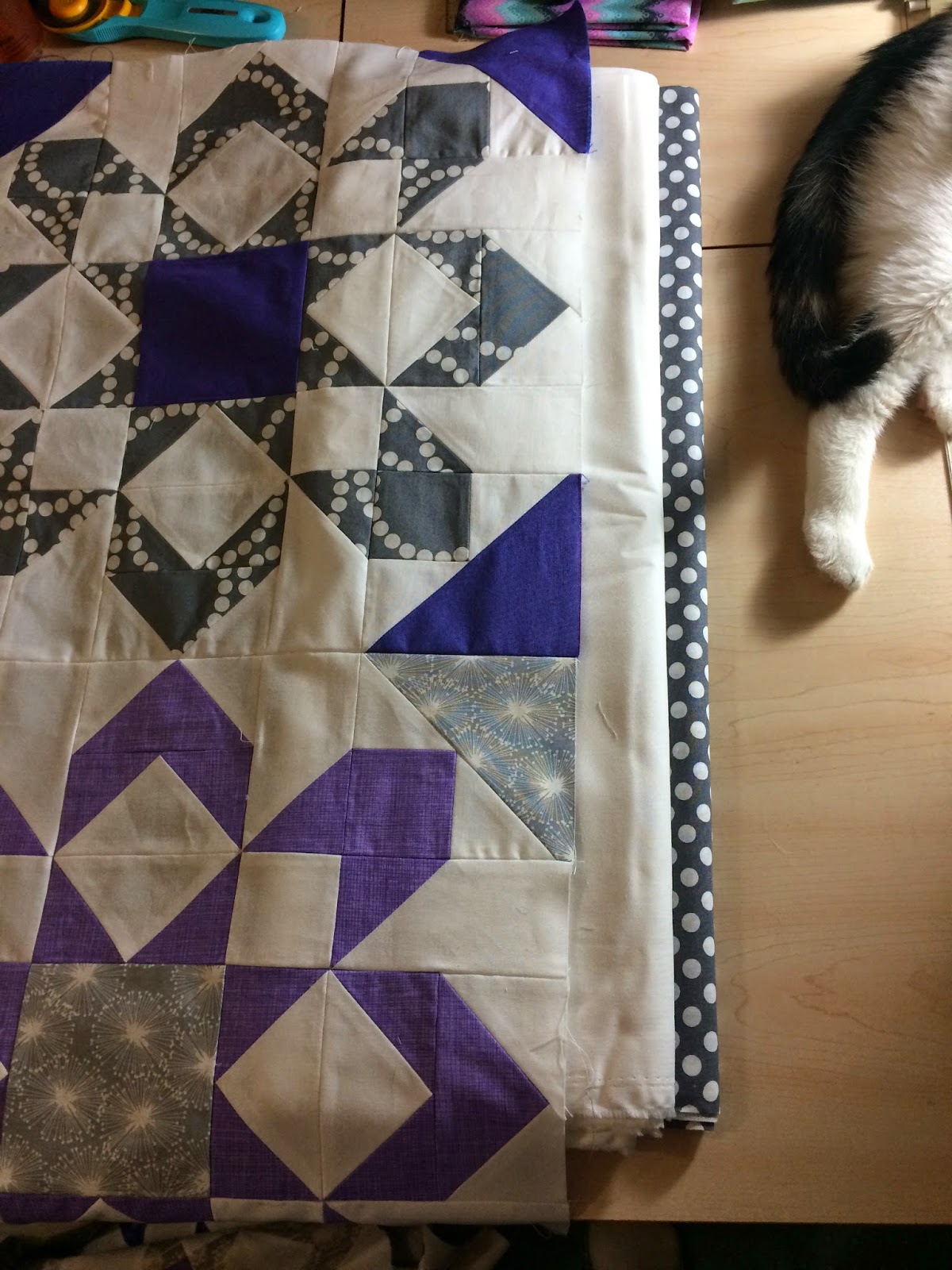 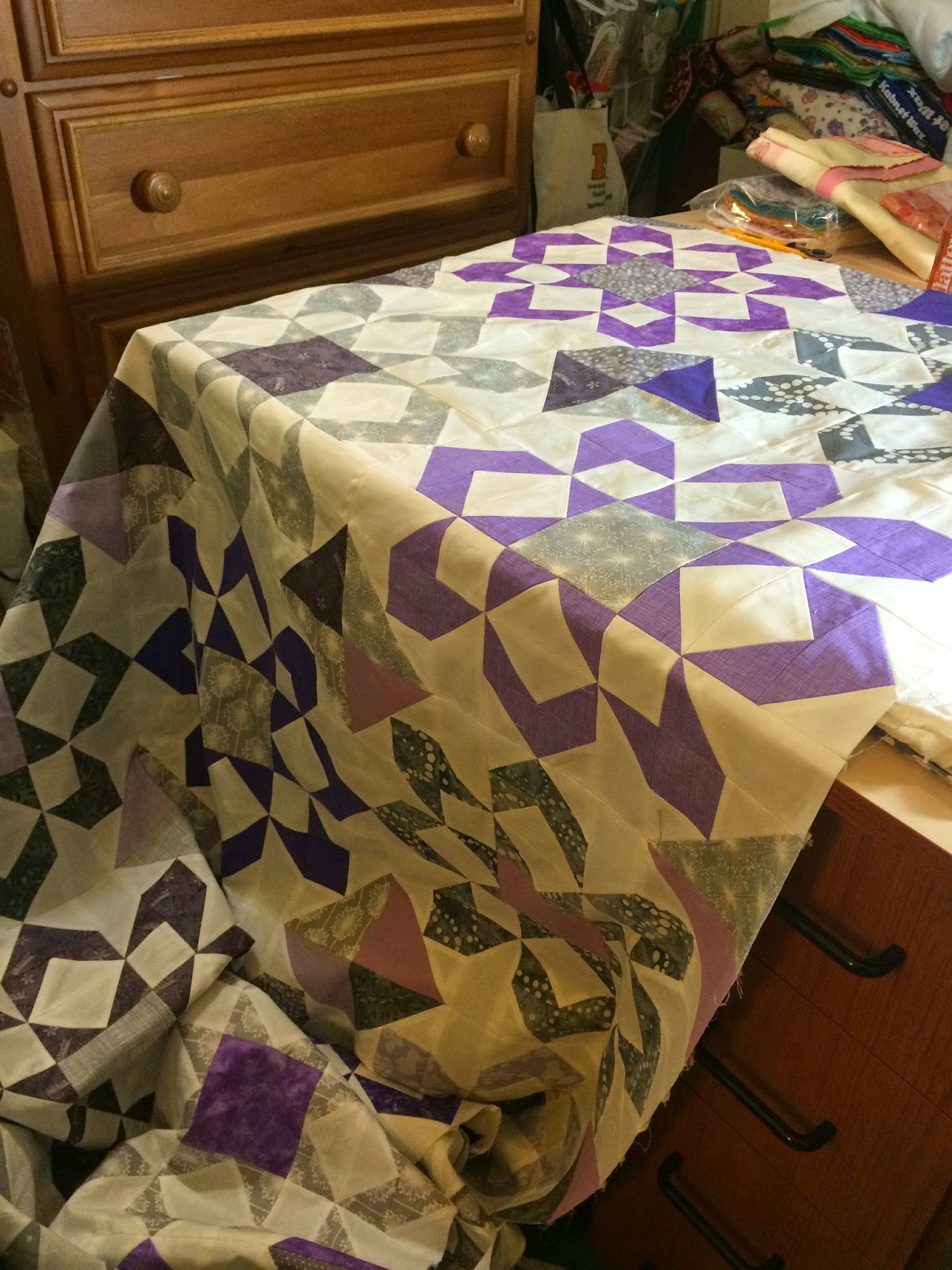 Here is what the original border looked like and I loved how it turned out! 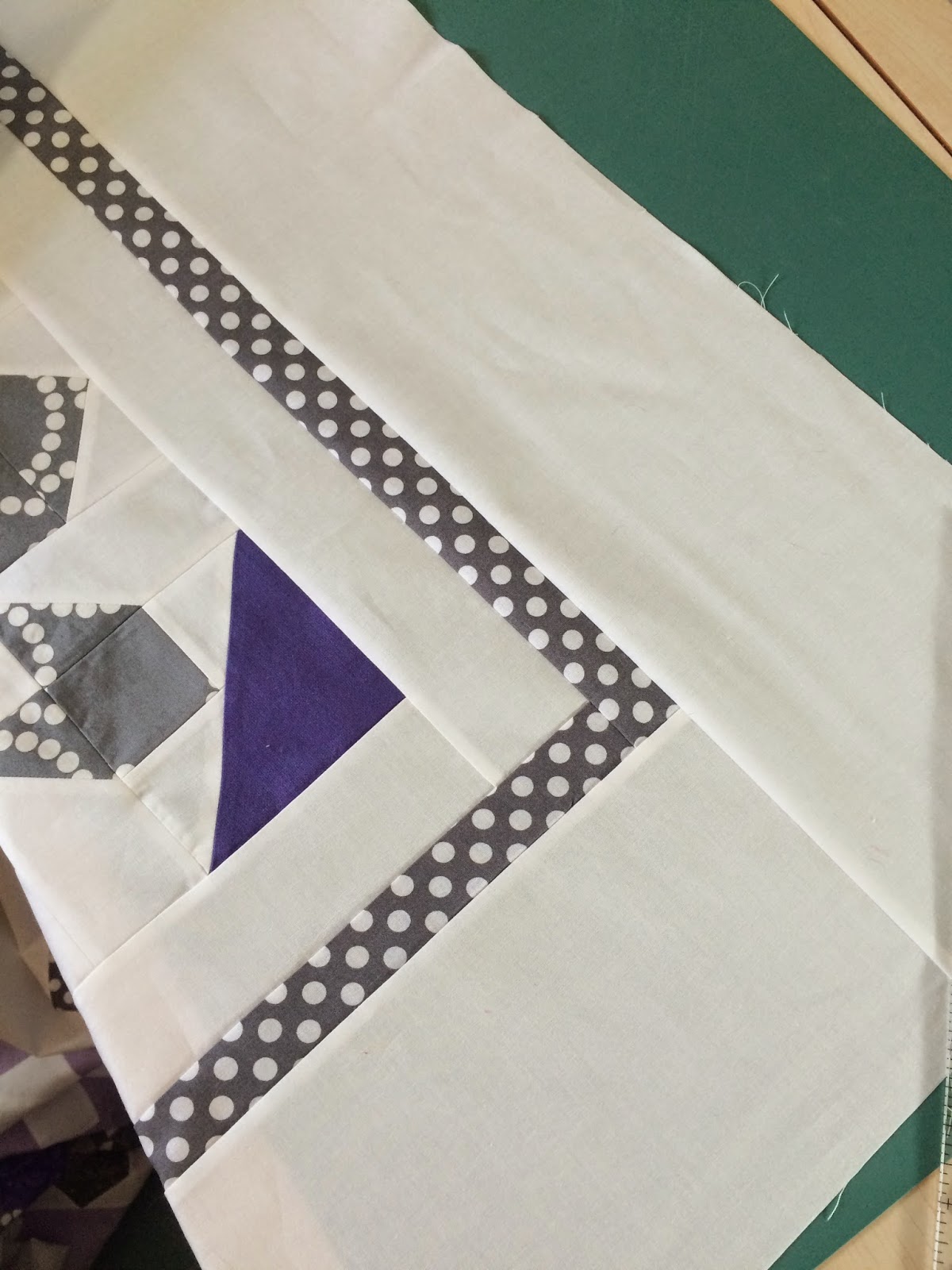 So I debated on whether to add a purple strip or another gray strip.
Then I found this fabulous plus fabric when cut on the bias became "x"s.
As you can see there were already "O"s.
Perfect for a wedding quilt!  Gray it is!
The back was going to be gray too so this allowed me to use purple for the binding.
I added another 2" outer white border after this.
It took me 2 + days/nights of sewing to get the top finished!
With hubby doing all the cooking.
I literally came down for meals and to go to the bathroom that's it!!!
And the backing you ask?
My original plan had to be scrapped as the 108" wide I had was not long enough, sad.
I used every bit of my Kona Ash and still ended up making a pieced strip to the my length.
I can show you that when the whole thing is finished and gifted. 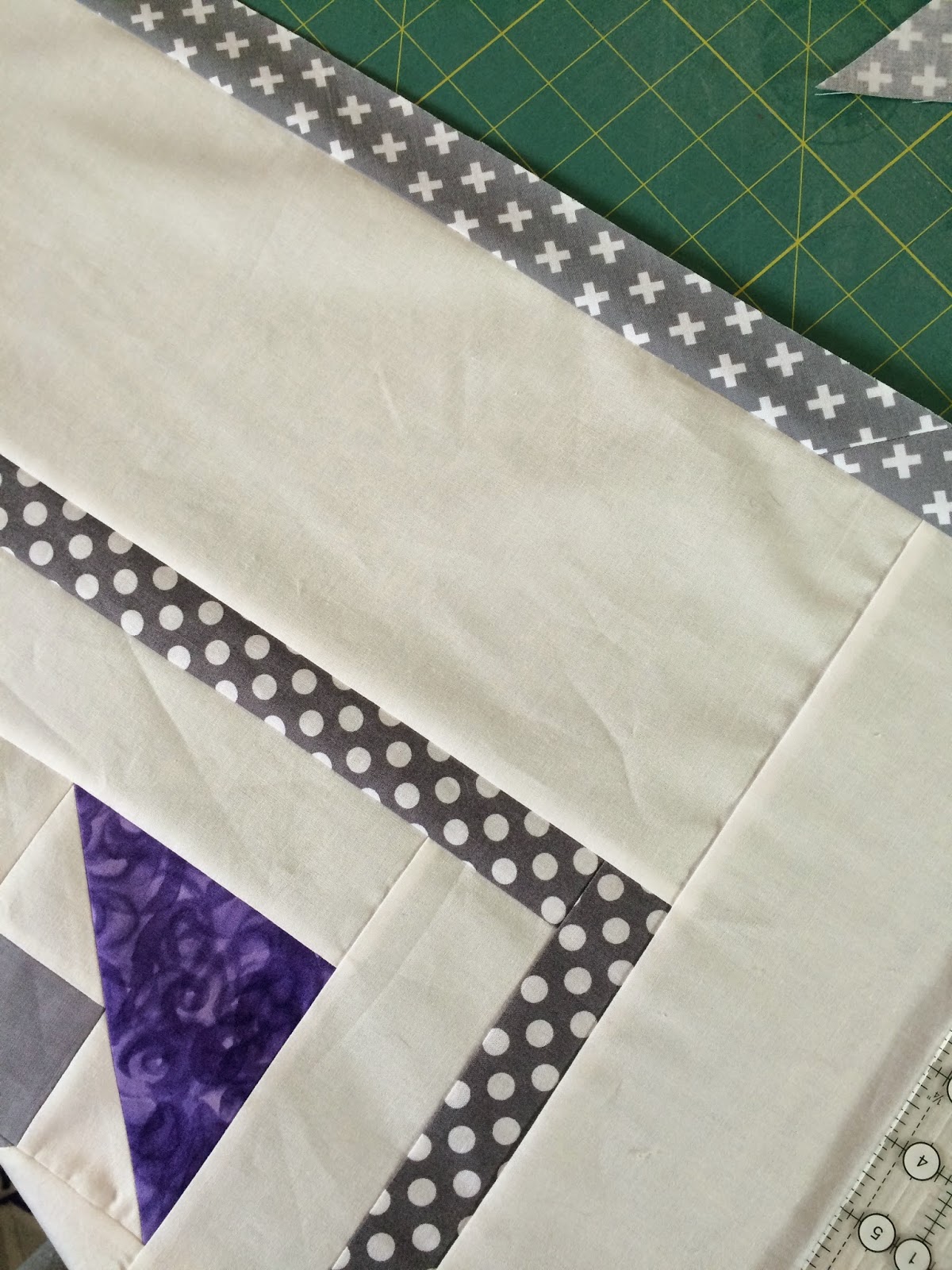 As you can see the appropriate cat hair covering has been liberally applied!
Thanks Autumn! 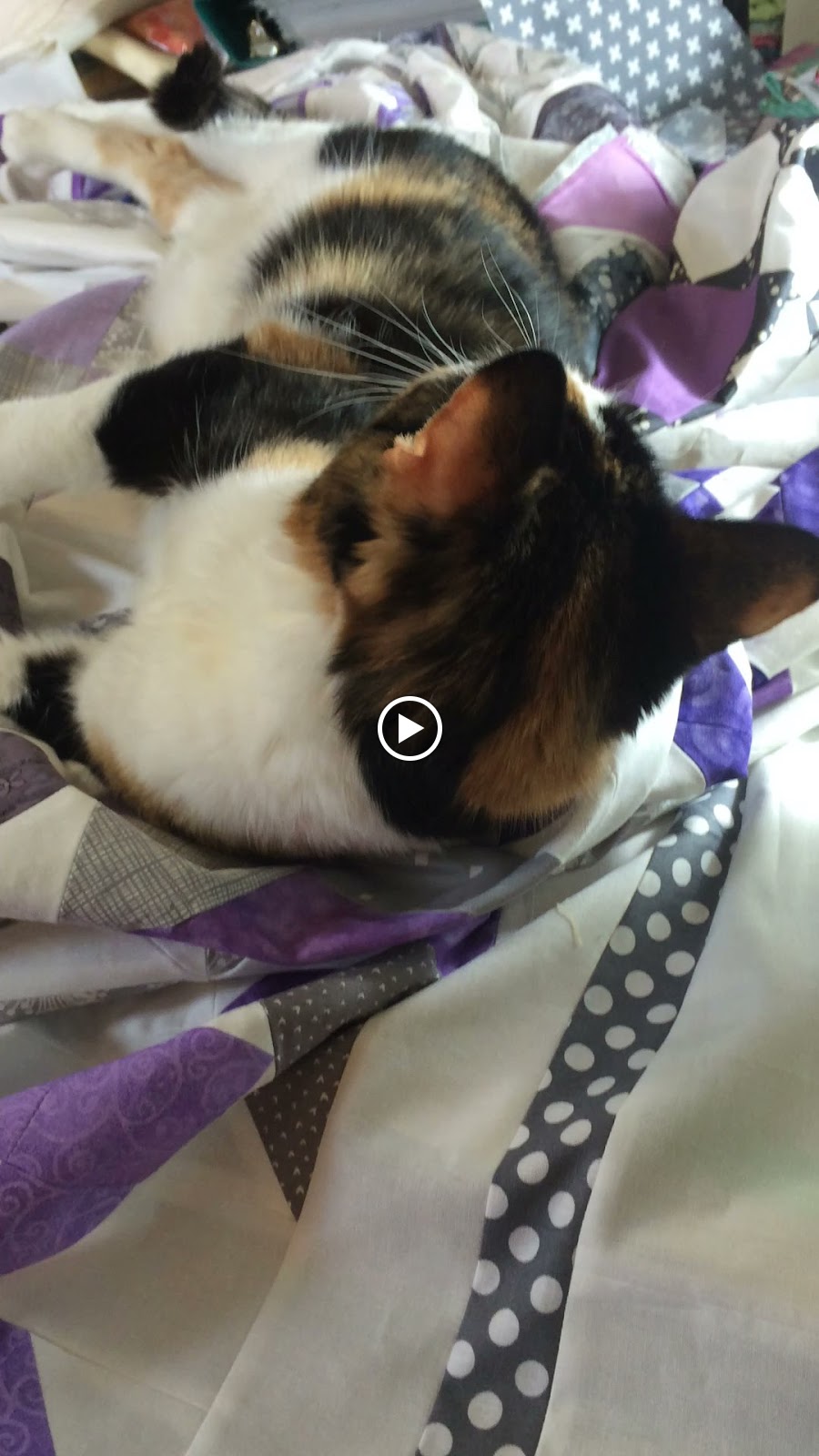 Now that you are finished laughing at her, have a great day!
I am linking up to WIP Wednesday over at Freshly Pieced.

Have a wonderful, stitchy day!

Oh, it's going to be great! Lovely borders!

Oh my gosh my cats totally do this, too. I've given up on ever making a quilt (or wearing clothes for that matter) that don't have a liberal dose of cat hair on them!

I just love how this is turning out! I think you need to make another one cat size, since this one is loving it so much.