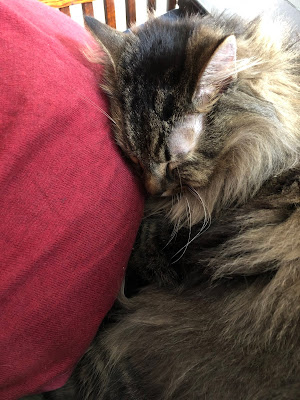 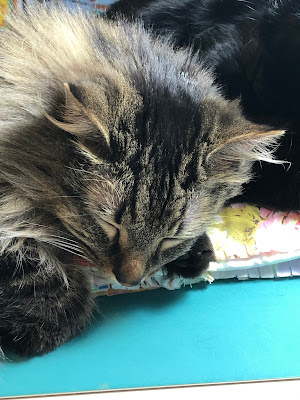 On Saturday, 5 days after he went missing, our Finn is finally home.
I got up on Saturday am feeling very depressed.
I went to the crazy cat house at the end of our street hoping maybe Finn had found his way to that house since she leaves out food and water and shelters for our local stray cat population.
No luck.
Later in the morning, a man called.
He was walking his dog and thought he had seen Finn.
I RAN to where he was but no cat.
Then he told me it might have been a gray long hair cat.
There is a long hair gray cat in the area that we see from time to time too.
A previous young man had told me he had seen Finn and his mom messaged me the address,
so I walked over to where that was.
I skulked about back yards calling but again, no luck.
I did stop and hand out a flyer and the neighbor told me that it was probably the long hair gray cat that lives across the street.
Whelp, now I know where that cat lives!
I walked home.
I stopped at the cat lady's house again and then went tromping through the woods,
calling Finn the whole time.
Nope.

Chris had been at our church working and called to say he would be home soon.
He got home and wanted to go out and do something.
I didn't feel like doing anything but thought I should probably get out of the house.
Every time I did anything that gave me joy I felt guilty, like I should be out looking for the cat.
I checked the cat lady's house one more time, then we went to the apple orchard.
It was so cold and rainy!
All I could think about was how miserable Finn would be in that weather.

We got home and I puttered around, and we turned on the Hallmark channel.
We both love the Christmas shows.
A new show was on at 8pm, so we settled in to watch.
After just a little while, Chris shouts out my name, "PAM,  FINNY IS ON THE DECK!"
I jumped up ran to put my boots and coat on and headed out the door.
It spooked him when we got up as he could see in our door.
So the hunt with flashlights was on.
I went back inside to get a food container and some wet food and his dishes.
By the time I got back outside Chris was (angrily) shouting my name again.
I think he had been trying to draw my attention but I had gone back inside for the food.
He shouted, "He's on the front porch!"

I went around the house in the opposite direction from Chris and there he was.
Sitting on the bricks meowing VERY loudly at me but not moving.
I slowly approached him, talking softly the whole time, with tears running down my cheeks.  GRAB!!!  I had him in my arms!!
His eyes were as big as saucers and he was hissing at me, but he was home! 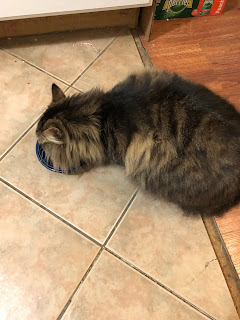 I took him inside and Chris got some wet food in a dish for him, which he greedily wolfed down.
He was no worse for the wear though.
PHEW!
He was very jumpy and walked around checking everything out.
Meowing the whole time.  He eventually settled down and could not stop purring.

I want to say that on Friday, I said a rosary asking our blessed Mother to guide Finn home.
I promised to say a rosary every day forever if she brought him home.
Totally worth it!
I am so grateful for her divine assistance.

Chris and I want to thank EVERYONE that said a prayer, sent good thoughts, handed out flyers, went looking or offered to come over and help us look and just provided positive moral support.
Our blessed Mother sent Finn home to us and for that we are eternally grateful!
I have no words to express our gratitude to each and every one of you!
THANK YOU!! 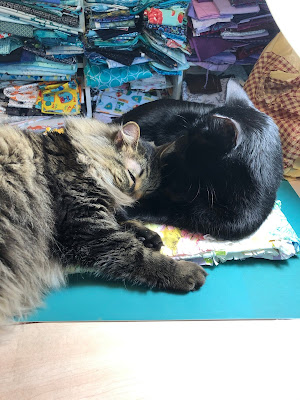 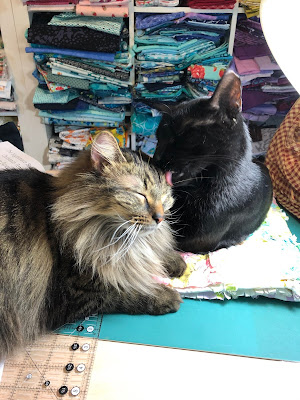 Cole is still not sure it's his brother and alternates bathing him and hissing at him.
Hopefully that rift mends quickly.  I alternated between crying and cuddling for the rest of the night. 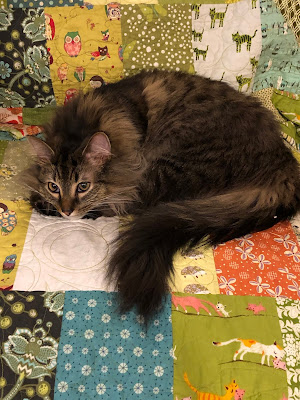 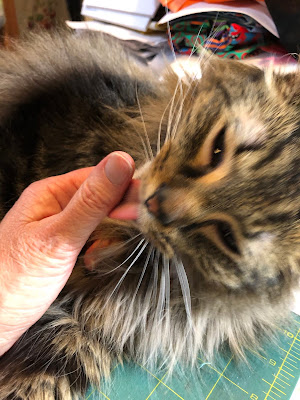 Our Finny is HOME and once again all is right with the world!

Pam I am SO happy for you! I read about Finn missing on Instagram. Such great news! One of my cats got out a few weeks ago for just a few hours. We were frantic! I saw him "slinking" across the street, and he wouldn't come to me. He was so upset. I chased him into our porch, and he hissed the whole time. Then when I brought him inside my other two cats hissed and sniffed so much I thought maybe I had the wrong cat. LOL.

so pleased and happy.... great outcome!!

Sharing in your happiness. Don't you with you he could tell you where he was?

I don't know if Finn was neutered but there may be baby Finns in the neighborhood soon. That would be so nice to give Finn kitties at Christmas!! I can't promise to say a rosary a day but I will say one for sure! Hugs.

I am so glad to hear you found Finn. I was thinking about him a couple of nights ago. Prayed that you would find him. God is good. Finn is now safe, and you and your husband can now get some much needed rest. Peace to you both.

Loved the post. I'm so happy your baby is home.

I'm so glad that he is back home safe and sound.

It was great to get your email and read that Finn was finally back home - hopefully Cole will forgive him for stopping out all night. Good to read you are all back together again :)

Mine disappeared a couple of weeks ago and, like you, I looked and looked to no avail. I was so worried as he's an old boy (17 1/2) and I couldn't imagine him surviving for long at all out on his own. I was so sad when I went to bed that night, worried sick. I had a hard time sleeping and got up around 4am. For some reason, I turned the back porch light on, opened the door and went out, softly calling him. I glanced out in the yard and I see 2 glowing eyes on the hammock just looking at me. It was him!!! I grabbed him up, kissing him and crying. So I know how you feel and glad he made his way home!!

I have been so worried! Thank heavens he found his way home. I have many cats and each one is special!