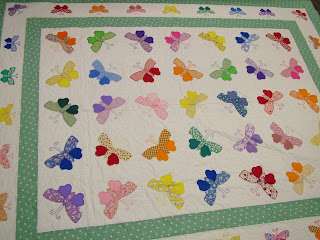 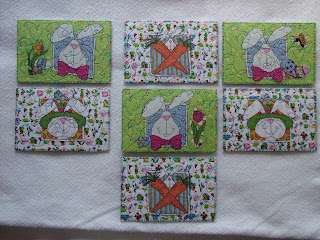 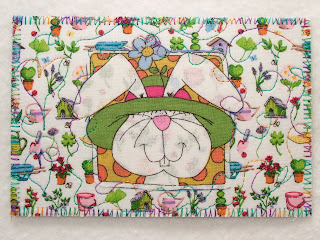 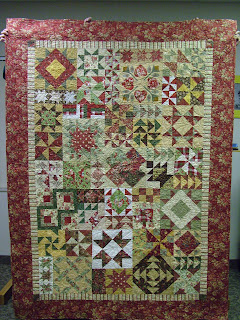 I know it has been a long time since I have posted, it has been crazy busy with Lacrosse season going on! Now that I have a minute to breathe and no one is on the computer, I have uploaded the pics I promised. The first one is of the butterfly quilt the ladies in my church group made. I cut out all the butterflies and fused them to the background. The ladies took the blocks home and did the blanket stitch by hand around them. They also put on the antennas. I finally got all the blocks returned in Jan (it was handed out in Jan of 06). I put them all together and but on the borders. The outside border with the smaller butterflies had to be done after the center was done, so some of the ladies took the entire quilt and finished the hand-work. As you can see it was spectacular!! I took it to a long arm quilting friend of mine and she did the quilting. It doesn't show up very well, but she did 4 hearts in the white centers, 2 hearts along the edge and 1 in each corner, along with some other creative quilting on the borders. She did a fabulous job!

The next pics are of the Easter postcards I made. It was fun, and I think everyone has received them.

The last pic is the anniversary quilt I made for my sister-in-law and brother-in-law. They had their 25th anniversary last June. Their children planned a party but we had very little advanced notice. I wanted to make a quilt but did not have enough time. They had just moved so, I also did not know the colours in their new home. We went to visit them in August and she gave me a small swatch of fabric with the colours on it (which I included on the label, just to be funny!) When we got home there was an issue of Quiltmaker waiting for me with this quilt on the cover. I had been thinking about what to make and this seemed perfect, just what I had been thinking of! Unfortunately, it was a 3 part series, groan, so I had to wait 6 months (the mag only comes out every other month!) for all the patterns! I began making what I could and finally finished in March. I think it came out really nice and can't wait to give it to them. I sent them the fabric postcard I made with some of the fabrics from their quilt in it and told them to call me as I had something for them. She loved the postcard so I can't wait to hear what they think about the quilt!! There is a story behind the quilt in addition to the one I already told so I will post it another day with the label, so you can see the tiny fabric swatch I had to work with.

Have a blessed Easter!