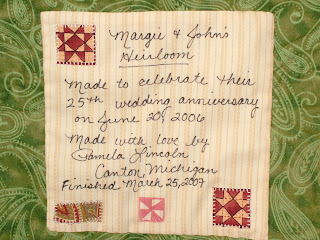 I had a few minutes so I thought I would post the story behind the "Heirloom" quilt. A few years ago, I made a rag quilt for my nephew, also our Godson, for his high school graduation. My intent was that when he went away to college, he could take it with him and it would be a nice utility quilt for college. You know the kind I mean, flannel, with cut, raggedy edges? Well his mother had other ideas. She told me it was an "heirloom" and that he would not be allowed to take it with him! I tried to reason with her but to no avail. So when his mom and dad had their 25th anniversary, I decided I would make a *real* "heirloom" quilt for them. Possibly, by anyone else's standards, my quilt is not an heirloom, but it is the second most intricate quilt I have yet to make in the 5 years I have been quilting, so for me it qualifies!
So when we went to their new home to get an idea on colours, Margie gave me the tiniest bit of fabric and told me to use those colours. So I have included the *bit* on the label. From tiny acorns grow mighty oaks! I guess this is the case.

Enjoy the pic and the story.

For me it is a heirloom quilt as well. So many nice florals. So you are addicted to making postcards (!) well you are not the only one. I think it has something to do with them being fast and still creative. You and you church group did a great job with the Butterfly quilt. It looks really cheerful.
Have fun with Cynthia Siggies. Mine arrived on 04.17. Take care.

Here from Aussie Quilter. Have loved meeting you, & seeing your lovely work!