My DH always complains that we dont't do the things he wants to do over the Christmas holidays. He LOVES to go to certain places and Holly Mi is one of them, for the Dickens Festival. I think it was 20 degrees below zero on this day but he and I and DD1 all went to Holly with him. Here are DH and I in the refreshments tent drinking hot mulled cider. We had fun but it was very COLD! There are a lot of antique shops here and I picked out 2 really cool antique sewing implements (which I ended up getting for Christmas, but that's another story). 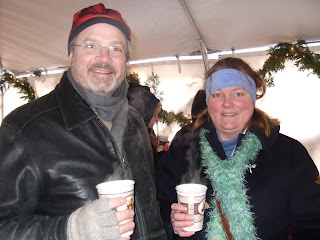 Also before Christmas we were asked by the CHV theater (where we quilt on Wed nights) how our craft show sales were at the STAB craft show. They were just OK, so the woman running the CHV Theater asked us if we would like to set up on the nights of the Christmas Extravaganza to sell our wares. This was the Thurs, Friday, 2 times on Sat and then on Sun before Christmas. Of course we said yes! So here are a few photos of Charlotte (I was taking the pics) at the CHV Theater. 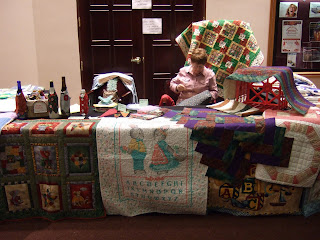 We had lots of room and did fairly well with our sales (over $500) for a few hours each day, which was better than the craft show! 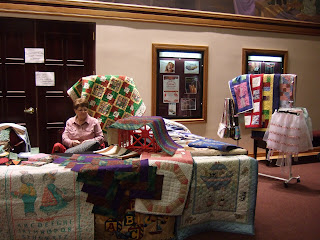 This brings me to the gift from my Secret Santa in the SS Christmas Swap. My package arrived and I saw that it was from Dawn S in Australia. I did not even open the envelope until Christmas morning. Here is the first thing I saw... 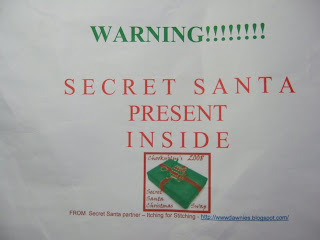 There was a very nice note and it explained why her gift was late. It really was not late as it arrived well before Christmas! Her blog is called Itching for Stitching, isn't that so cute??
She told me that she had read my blog and that I said I didn't have much time for stitchery so, bless her heart, she did a LOT of stitchery for me!! The designs were from Cinderberry Stitches which I really love (how did she know that??)

There was a beautiful bag with this cat on one side... 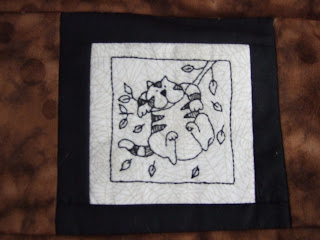 And a proper cat lady on the other side! Again, I think she knows that I have 5 cats! I love the bag, it is just beautiful. Her stitchery is so much better than mine! So she also included these fun coasters. I just LOVE them!!! My DH is constantly asking me to make a log cabin quilt for him and now Dawnie sends so many mini ones. AWESOME!!! 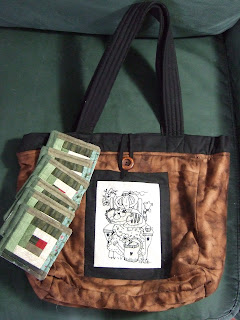 Then she sent this beautiful wall hanging. I immediately put it up on my front door. She included the wire hanger too. Isn't she just so clever? The sitiching is just fabulous. Then since she could not find buttons that suited what she wanted she used ceramic ones and painted them. (I need to be careful not to drop this or they may break!!) Oh please enlarge it and look at the beautiful detail!! 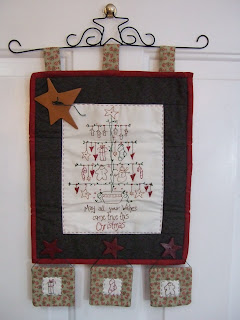 I have LOTS from Christmas to post but I need to go and do some other things for now. I will try to be better about posting from home. Most of the time when I post it is from work (weird how I have more time there than at home, huh??)

I hope everyone had a great holiday, Christmas or otherwise. I have lots more to share so will do so later.

I have fallen love with that stitching! I'm heading over to her blog now!

Hi Pam, so funny to see something you have made on someone else's blog. Am glad that you liked your gifts. I had fun making them. Christmas had come and gone too quickly this year. I am just ready to now settle, and it is all over. Wow it looks cold over there. Look forward to keeping in touch.
cheers Dawni xx

I love Holly, MI's Christmas. I remember going as a kid. Mulled cider and cookies YUM! I think one year we tried roasted chestnuts too. There are great antique shops in Holly too! Can't wait to see what you received.

I love your SSCS gifts from Dawn! Great stitchery!

Aww those gifts are lovely I love the hand stitching. I cant wait to see what you got from the antique stalls too.

haha!! Is your boss reading your blog?
I did enlarge the pics and the sticheries are very nice. I'm not very good at it but it sure makes me want to try>>

What beautiful presents. I didn't know you had 5 cats. that's probably why Stanley was taking such an interest in the things you sent me.