I took some much needed rest this past weekend and
attended the Ann Arbor Modern Quilt Guild retreat.
It was held at the Howell Nature Center in Howell, MI.
What a GREAT place for a retreat!
The sewing space was HUGE, the view was fantastic and the company was the BEST!
When I arrived some people were already set up and one side of the room was kind of full
so I set up by a window on the other side of the room.
Funny thing was there were 3 Pam's there including me.
I shared a table with one of the Pams and the other one was set up behind us.
It was the Pam corner, for sure!
I meant to get a photo but just forgot what with all the sewing and everything going on.
We ate well, we shared some wine, played Cards Against Humanity, watched movies, sewed, went on nature walks and even did yoga!!
It was an amazing few days.

I had hoped, when I signed up, to work on some UFO's but as it turned out
I needed to make some baby quilts for some friends that are having babies.
I finished 2 chenille blankets and a baby quilt top.
Here was our sewing space.
(As viewed from Pam's machine, not my machine) 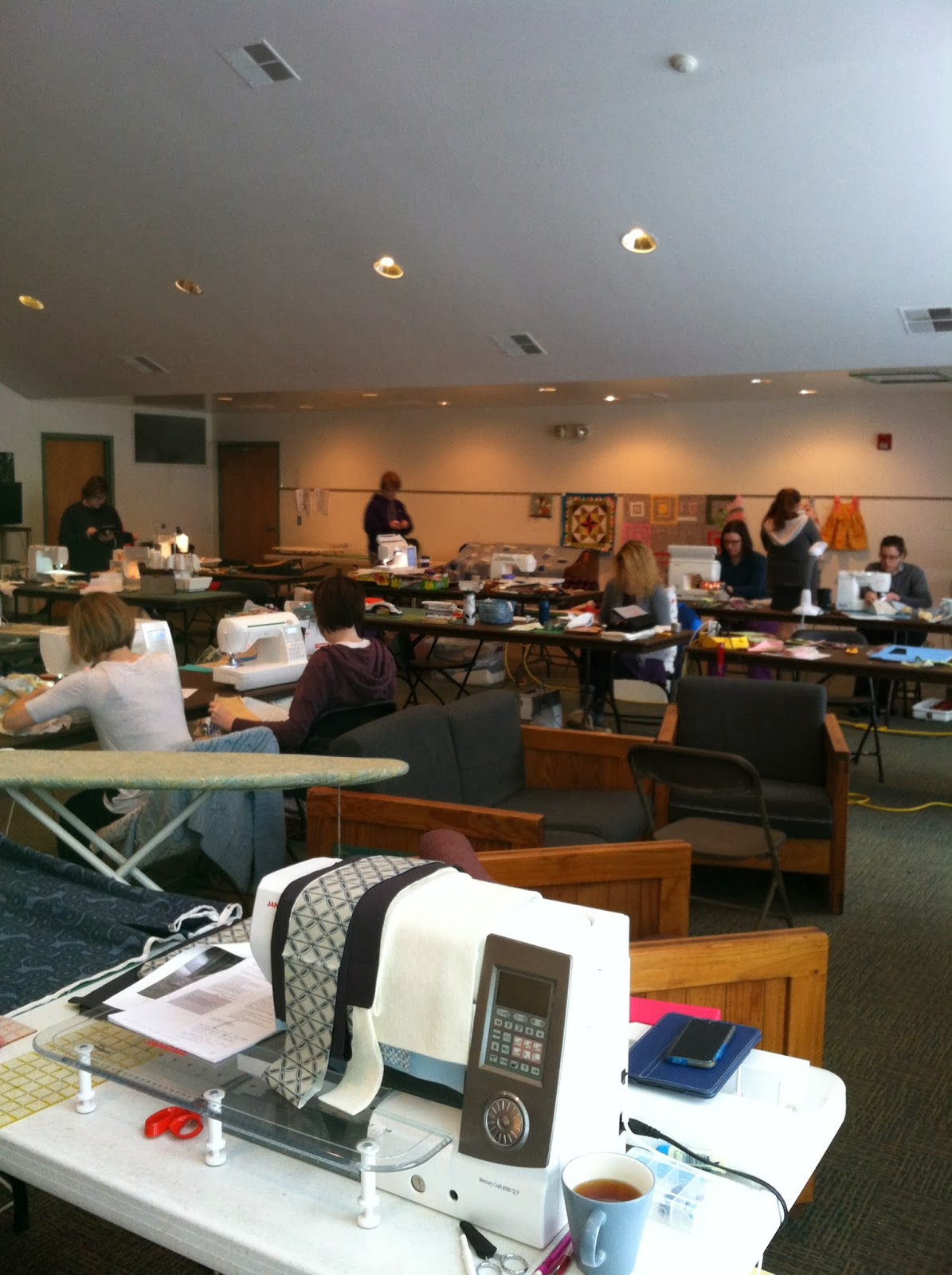 I went out for a walk and you can see the Grindley Lodge through the trees. 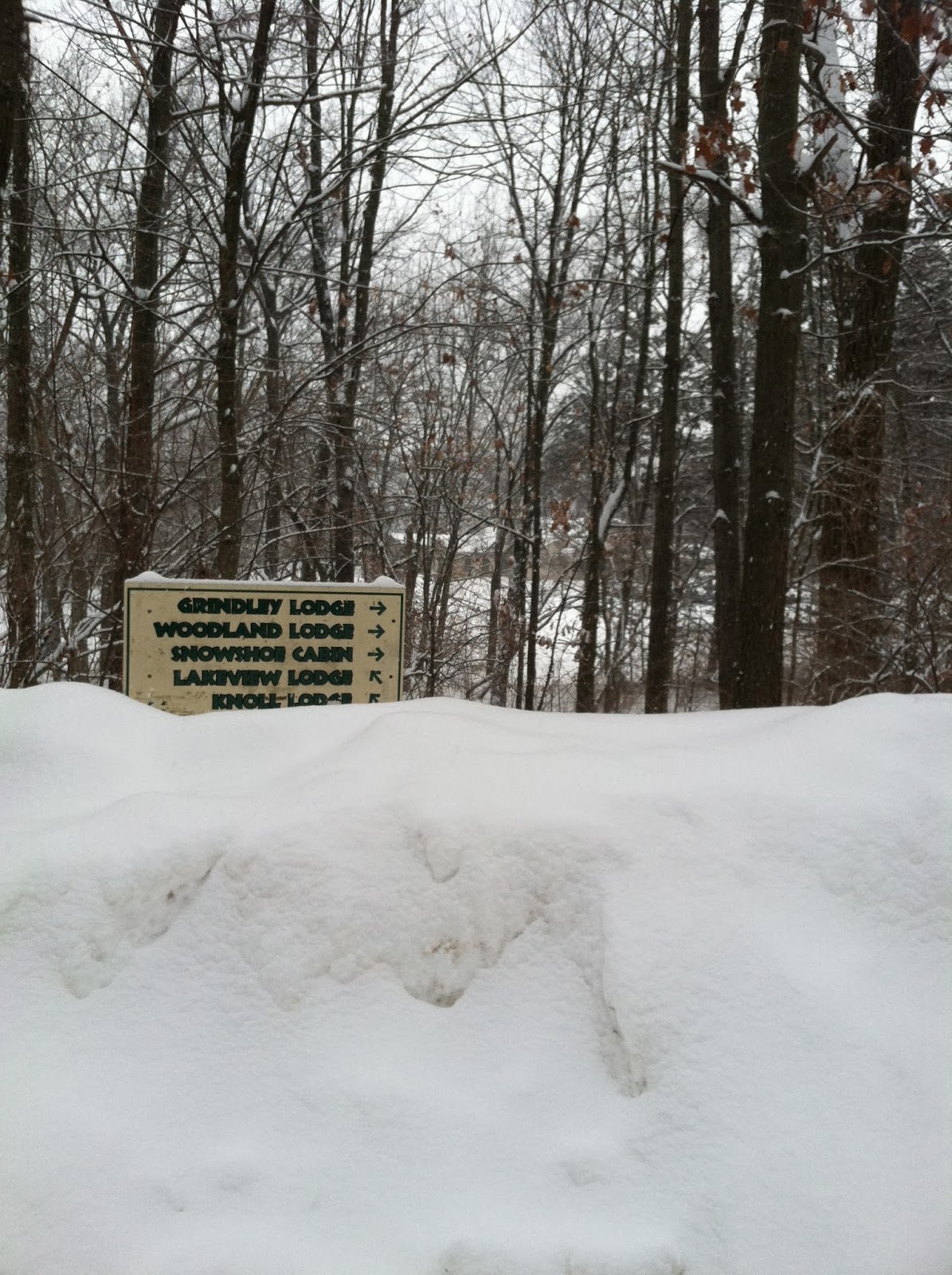 I walked down by the lake and there were many geese and this one lone swan.
He was beautiful!
Excuse the photo, it was gray, and snowing and I was using my iPhone.
It was so quiet, peaceful, beautiful and calm. 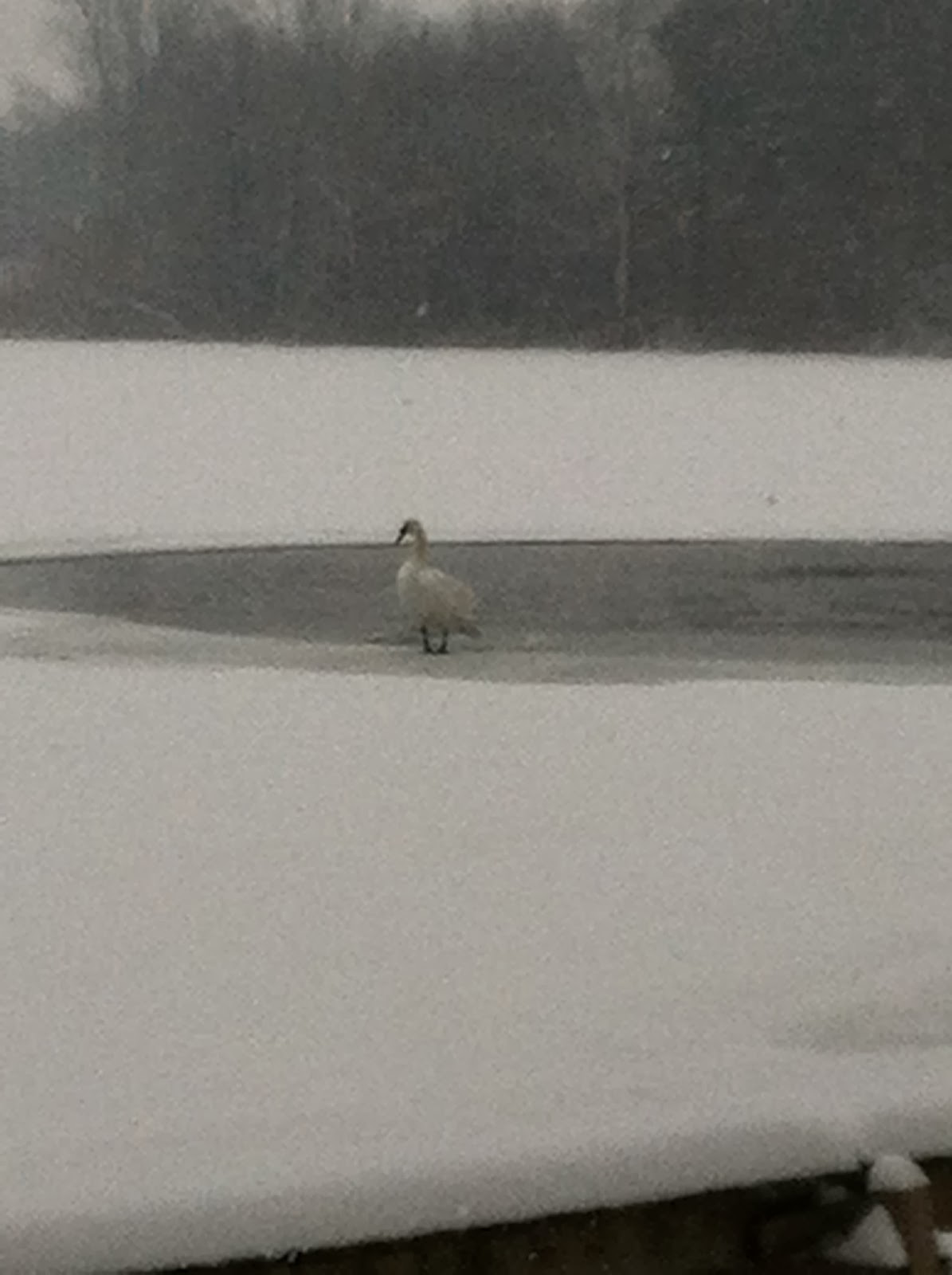 This was the other side of the room from where I was. 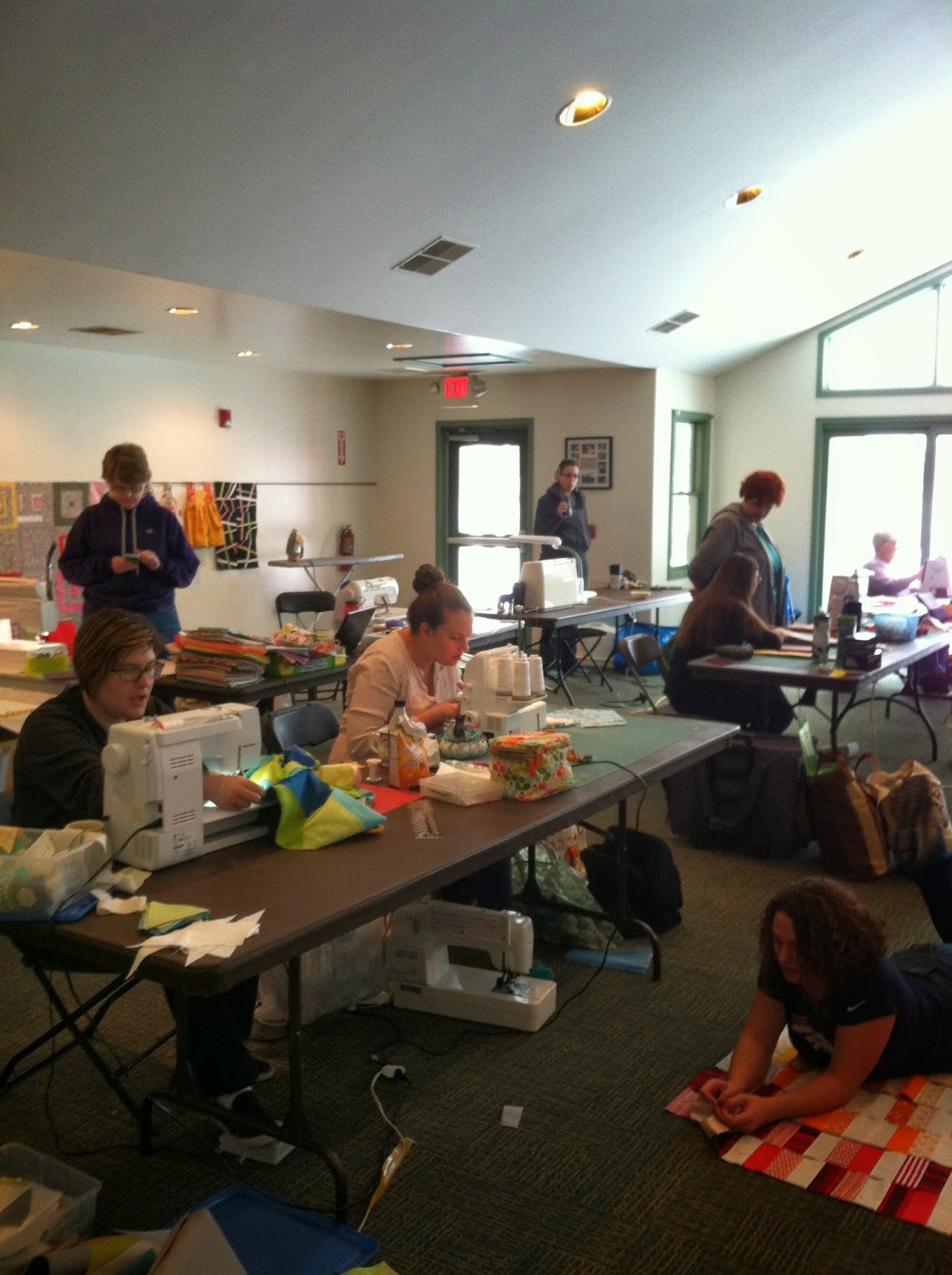 I was sitting at the table near those three windows but only took a photo after I was packed up and the tables were down. 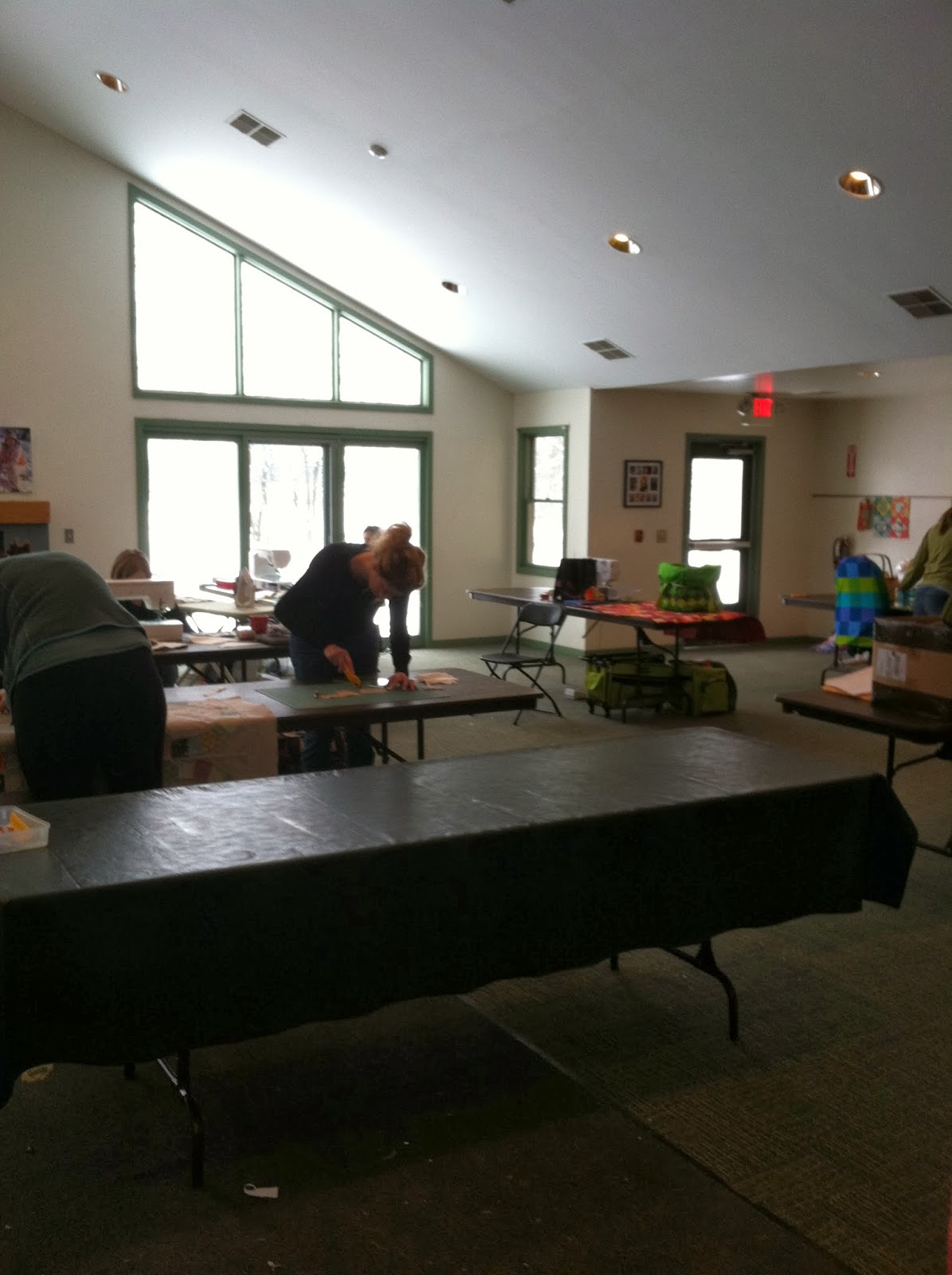 I took these fabrics... 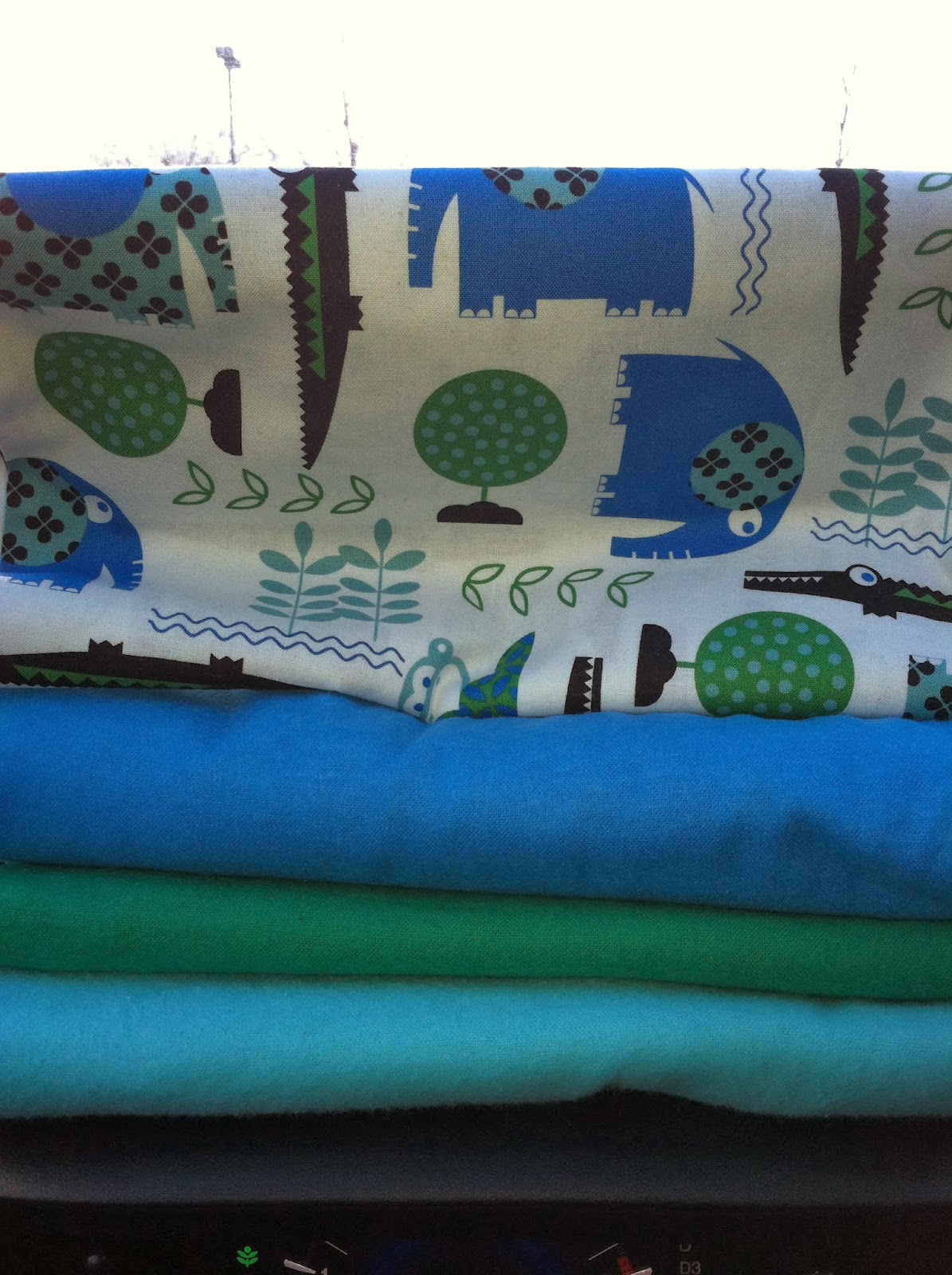 And turned them into this!
I LOVE the binding on this one! 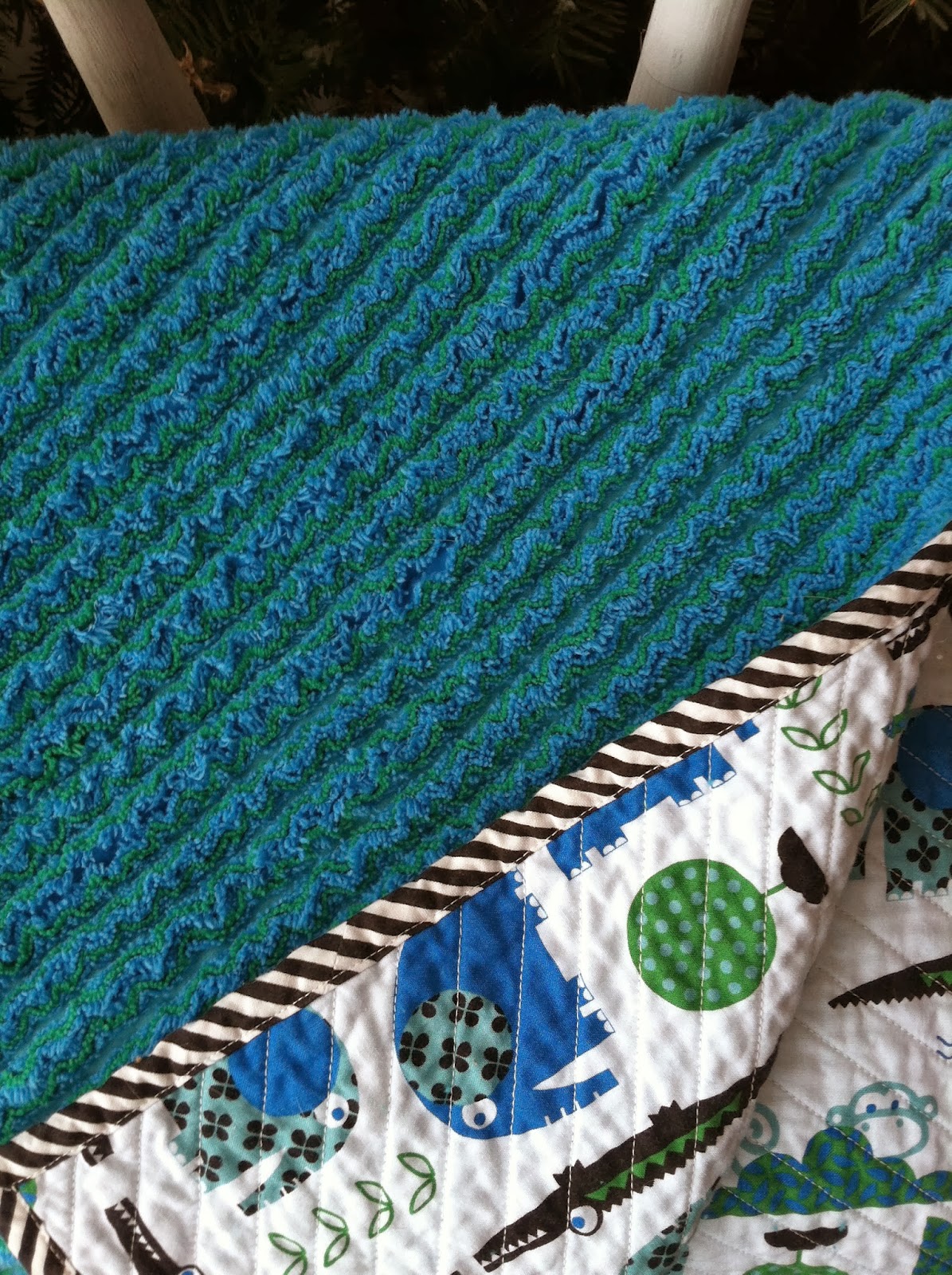 I also made a second one 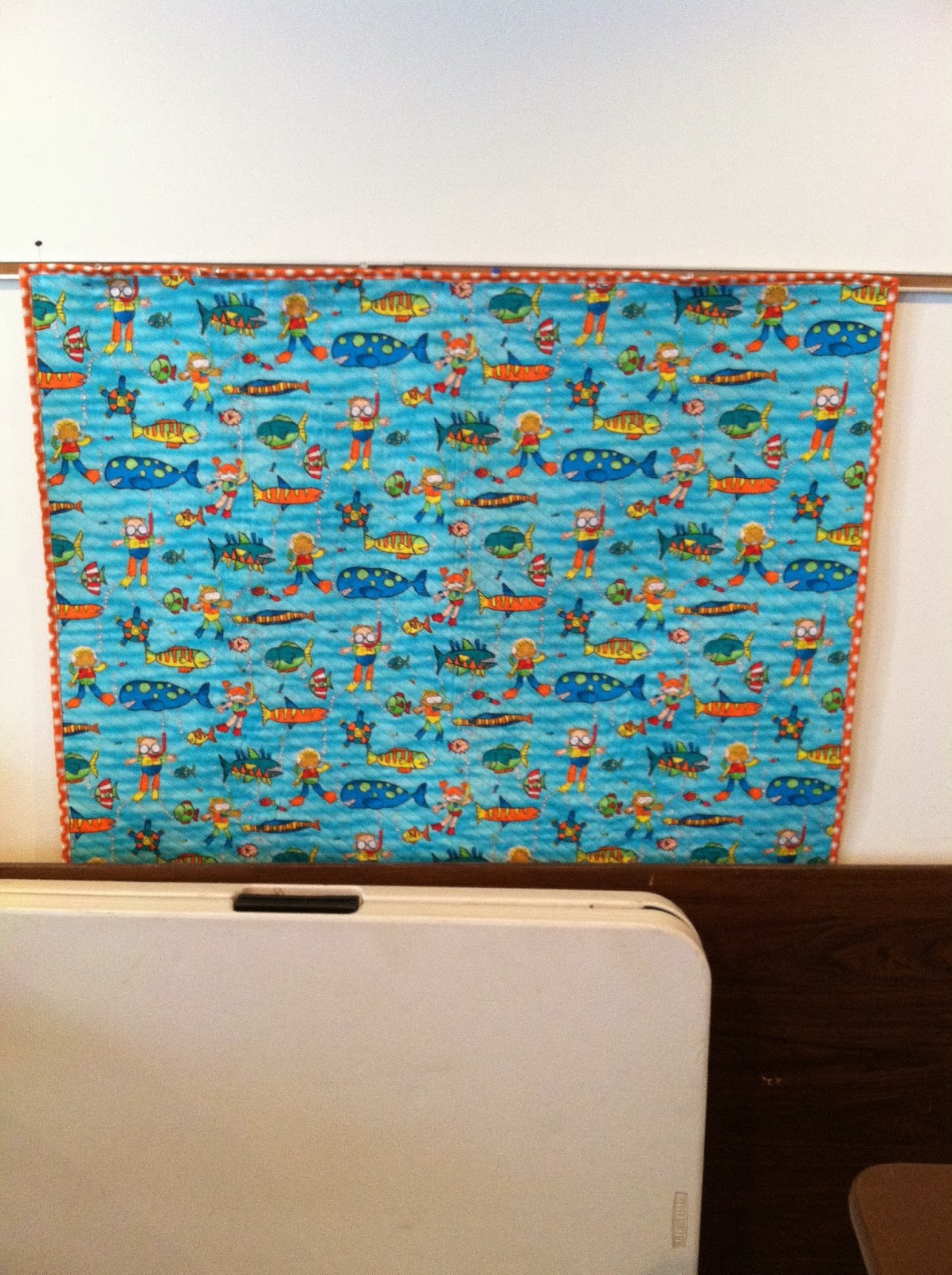 How cute are those scuba divers? 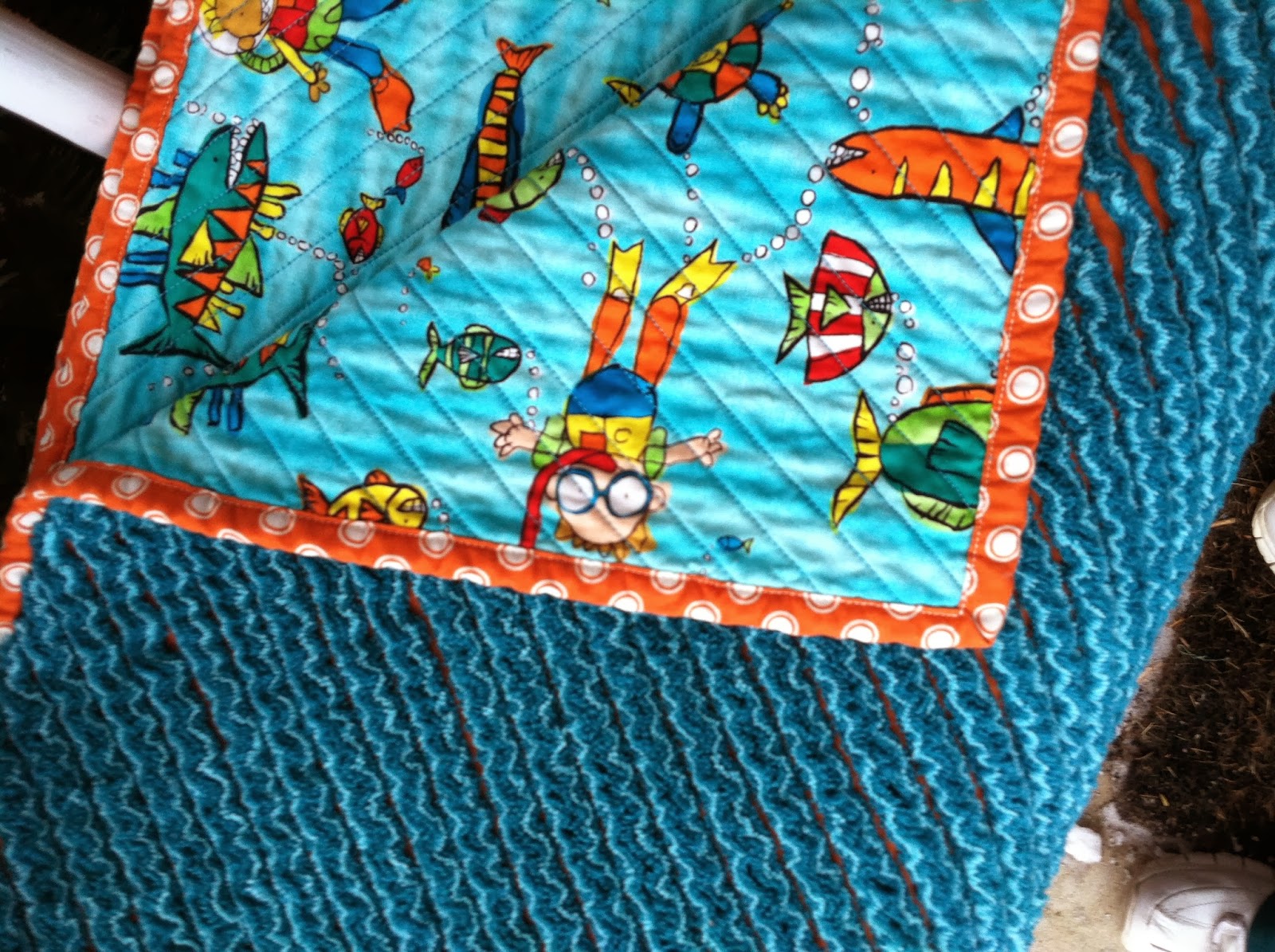 The baby top was from a pattern on the Moda Bake Shop.
It was an easy quilt to make but doing the applique around all the letters would have been much easier if I could have used my knee lift.
If you have one and are not using it you are CRAZY!!
Hook that bad baby up and get on it, you will be so glad you did!

Here is the baby quilt top.
I made the back once I got home so it is off to the quilter today.
The background is an Art Gallery fabric and it was so nice to work with! 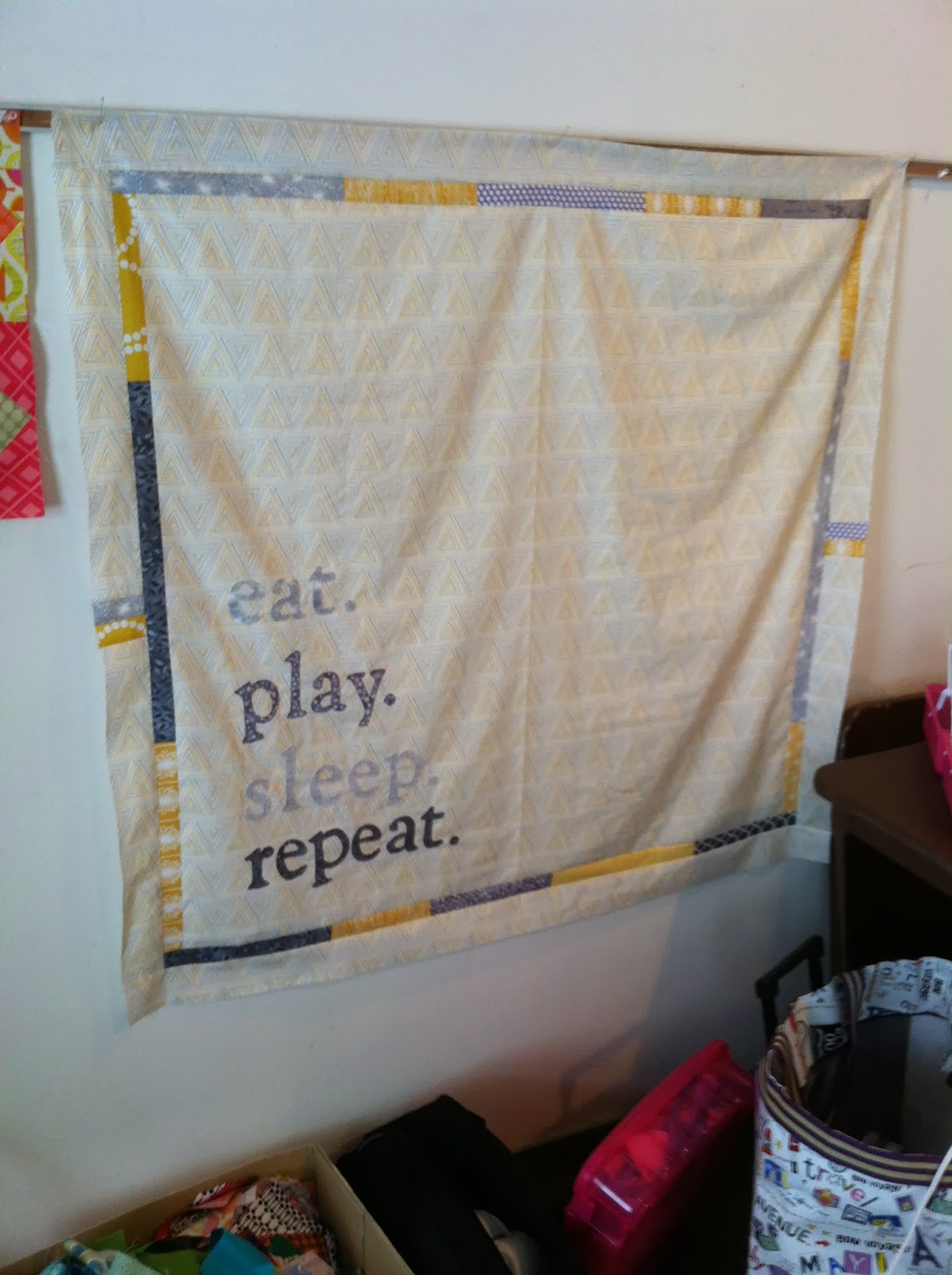 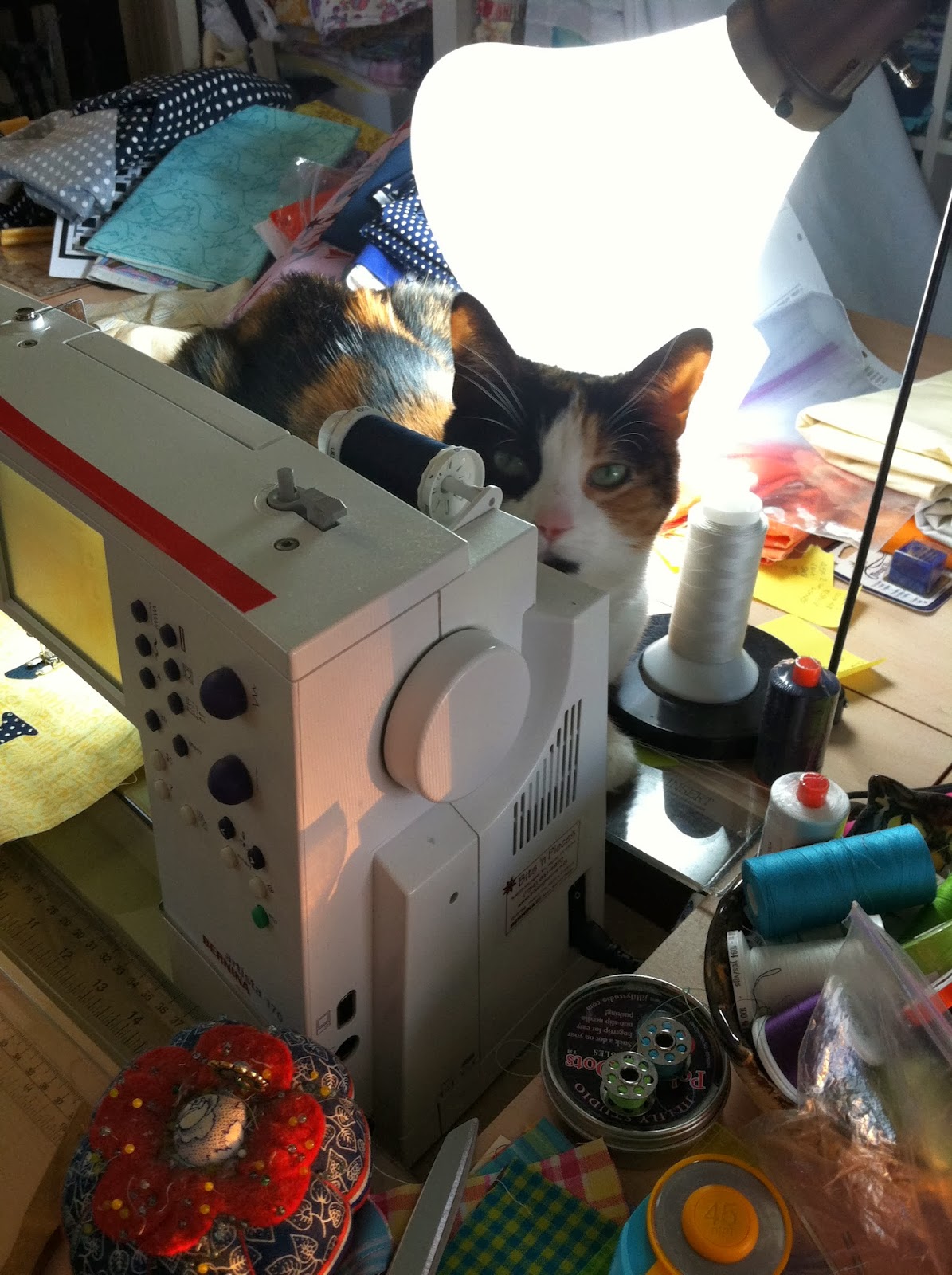 She likes to lay there when I sew because it is so close to the lamp that keeps her warm. 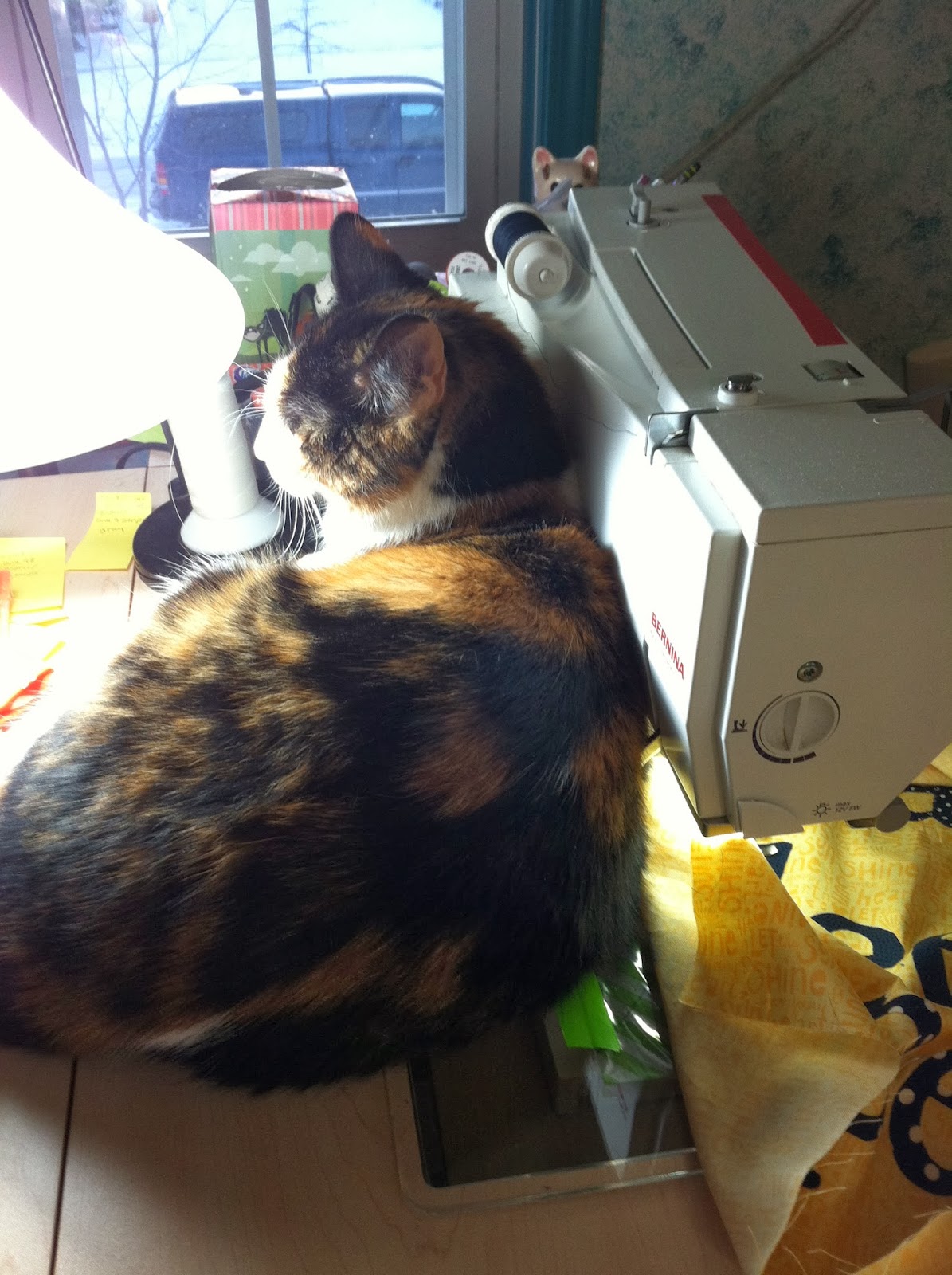 When the thread was going fast, she would peek over the top to see what I was doing. 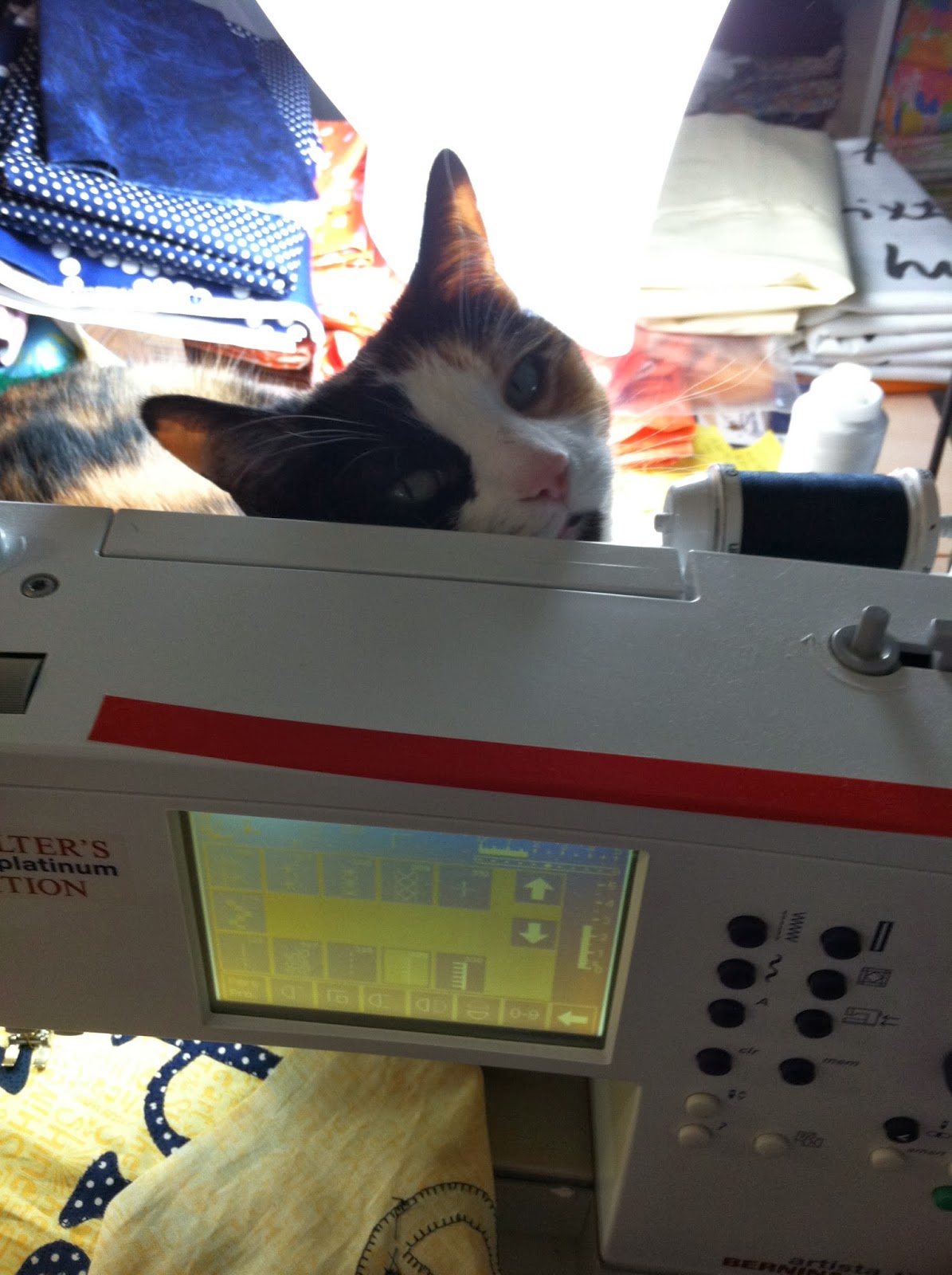 I hope you had a good weekend too.
The next 2 weeks are going to be difficult ones.
I have made the decision to move my dad closer to where I am and into a group home.
I had no idea those even existed for the elderly.
I look at one more tomorrow and then will be making a decision as to which one.
I basically will have 2 weeks to get him and all his stuff moved from where he is now, as I had to give them 30 days notice and hubby will be out of town the last week of this month.
I guess that's good as it makes me get right on it though, right?
I have not broken the news to him yet.
I think that will be this Friday when we go there as we will have to begin moving "stuff" around.
Wish me luck and keep us in your prayers.
I think I am going to need all the help I can get!!

My husband and I have been thinking about you and your situation since we read the last posting.... a group home sounds interesting. We had never heard of them for the elderly either. So we will continue to be thinking of you...

Hi Pam, you were right across the (main) road from my house at the Nature Center. It is a gorgeous place. Looks like you got a lot done, love the baby quilts. Keeping good thoughts for you and your dad. Everything will be fine - positive thinking :)

What a serene place to sew and looks like you accomplished quite a bit. I have one of those knee lifts,but haven't tried it yet. Maybe I do;)

Hope everything goes smoothly with your dad and he's accepting of the move. I am thinking a group home would be a good fit for him and give him some good friends. (I know he likes to converse with others quite often)

I was so bummed that I had to miss the retreat! Too busy with kid activities. Glad the location worked so well.

Both the group home and being closer to you sound like the right thing. I hope your dad sees the advantages to making the change. Both of you will be in my thoughts and prayers. I'm so glad that you were able to take a break. Michigan definitely has some wonderful places for quilting retreats surrounded by nature.

what fun! jealous, especially after I dropped friends off at the airport this morning too....
oh I LOVE my knee lift too!

I'm glad that you got to have such a wonderful time! Looks great!

It will be hard for your Dad to move, but in my experience they really tend to enjoy the new living situation once they settle in. It's tough, but it's for his good, and yours too. Time will heal all wounds, is that the saying? It's true.

how wonderful to be able to go to a retreat like this and have so much company. Looks a bit cold there with all the snow. Beautiful baby quilts, re the chenille I have recently bought a tool for cutting the chenille channels must have a go.
It will be good to have your Dad nearer you and I pray he settles in okay and the move goes well. It is not easy sorting through all the posessions etc so the best of luck

My parents opted to move to a group home and loved it. So many things to do that they might not have been able to do otherwise. The staff was super nice and the food was delicious.
Might I ask what fabric was it that had the scuba diver and fish on it? It is so very cute and I love the colors. Thank you and prayers for everyone.

Rosebud, you are no reply and have no email address listed in your profile so I will answer you here. Thanks for sharing with me. The fabric with the scuba divers is an older line, from Joann Fabrics, if I remember correctly.

Looks like you had a wonderful time at the retreat. Good you deserve a little down time. Prayers that you find a wonderful group home for your father. My husbands grandmother lives in a rehabilitation center and she loves it because she can play cards, bingo.