I just returned from a week long vacation.  It was fabulous!
With all of the things that went on in my life for the past year I think it was long over due.
We have not had a week long, travel to somewhere farther away then our own back yard
for over 15 years!
Hubby and I packed up our car and headed to Sarasota to see his parents.
We stopped in NC to visit with out daughter.
I had to have her try on the dress I was making so I could make adjustments
and then make the actual dress.
I know it looks weird but it pretty much fit.
Only a few minor adjustments.
Yes the seams are on the outside, so I can make the adjustments.
This was just the "muslin" mock up.
(I actually used Kona so she could use it as another dress eventually) 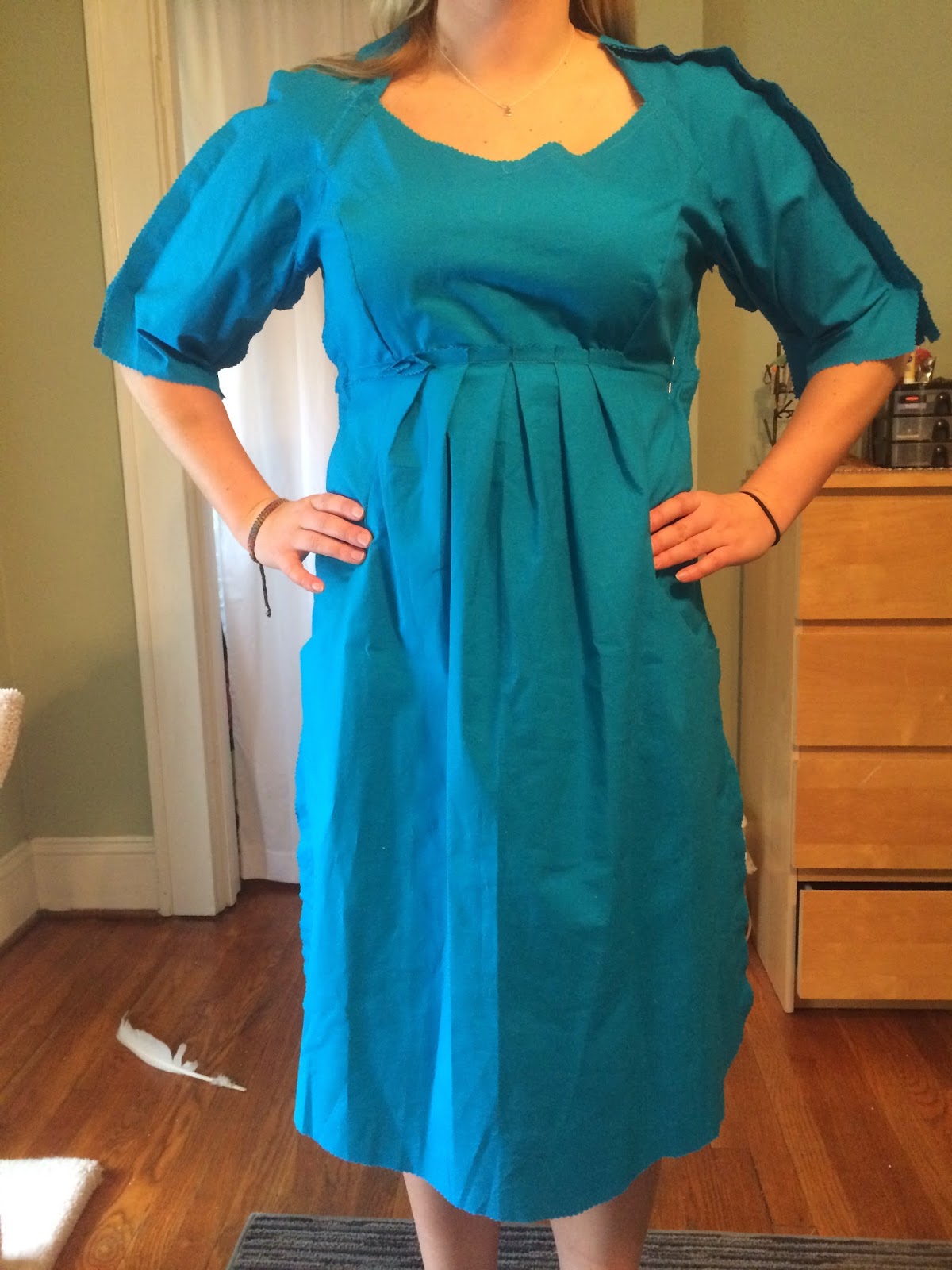 We continued on to Florida and stopped at this hilarious place to use the bathrooms!  Pedro's. 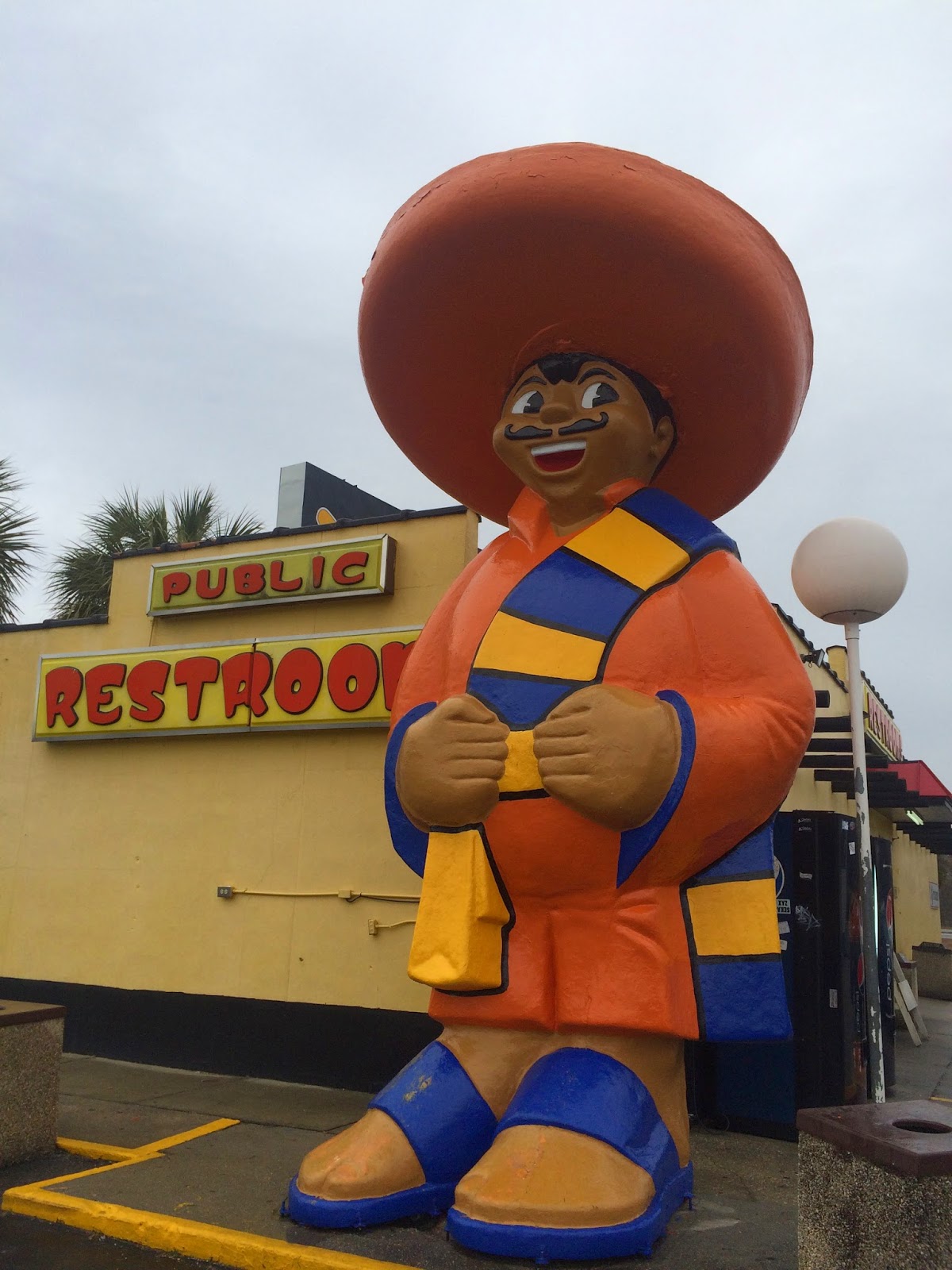 We arrived in Sarasota on Sunday and Monday was probably the best day we had the whole week.  On Monday we went to Siesta Key.
It is rated one of the 10 best beaches in the world and one of our personal favorites.
Both of us remember visiting grandparents and going to this beach. 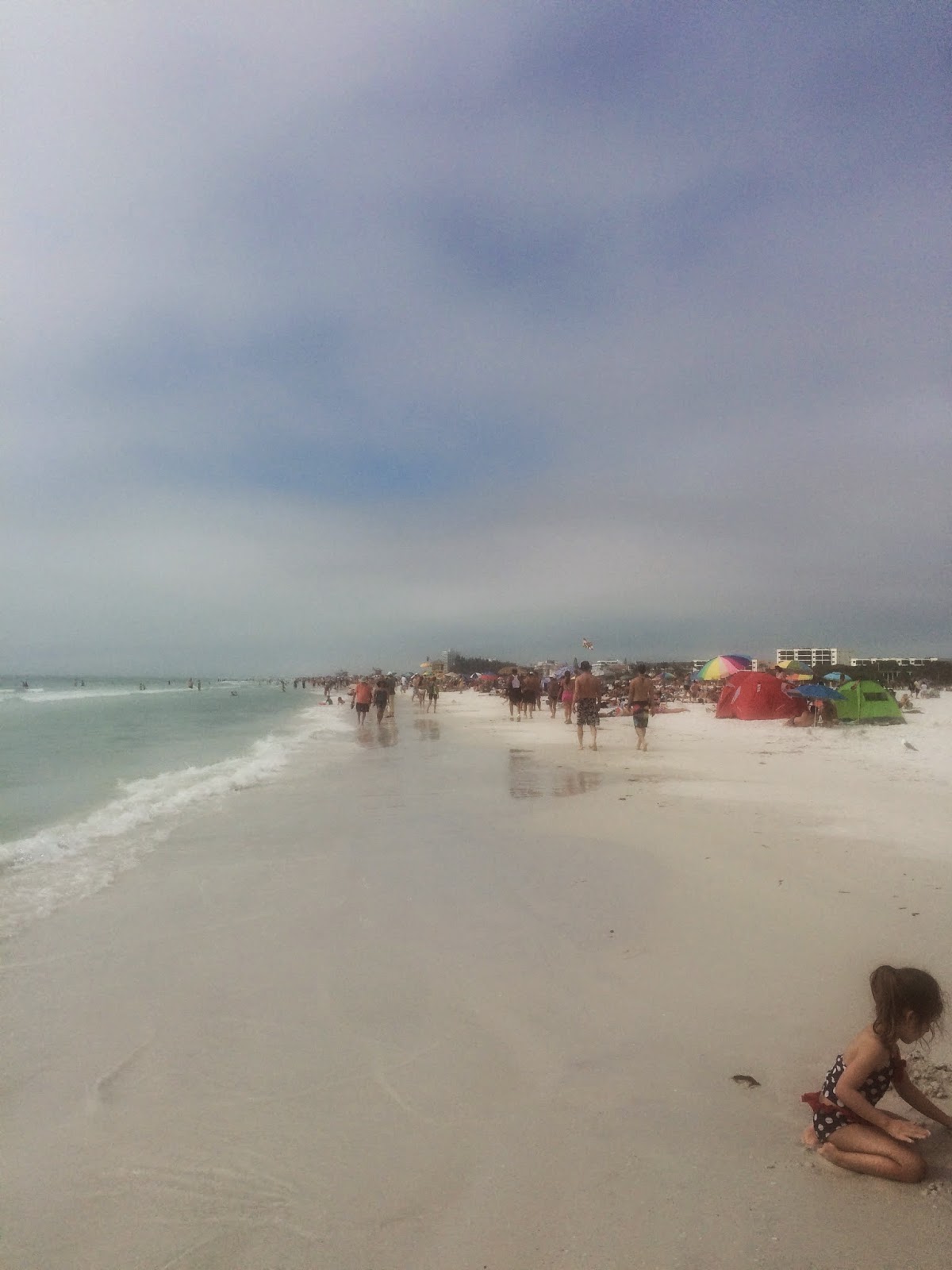 These pole people were all over the city too.
I thought this one looked cute holding up the rescue board. 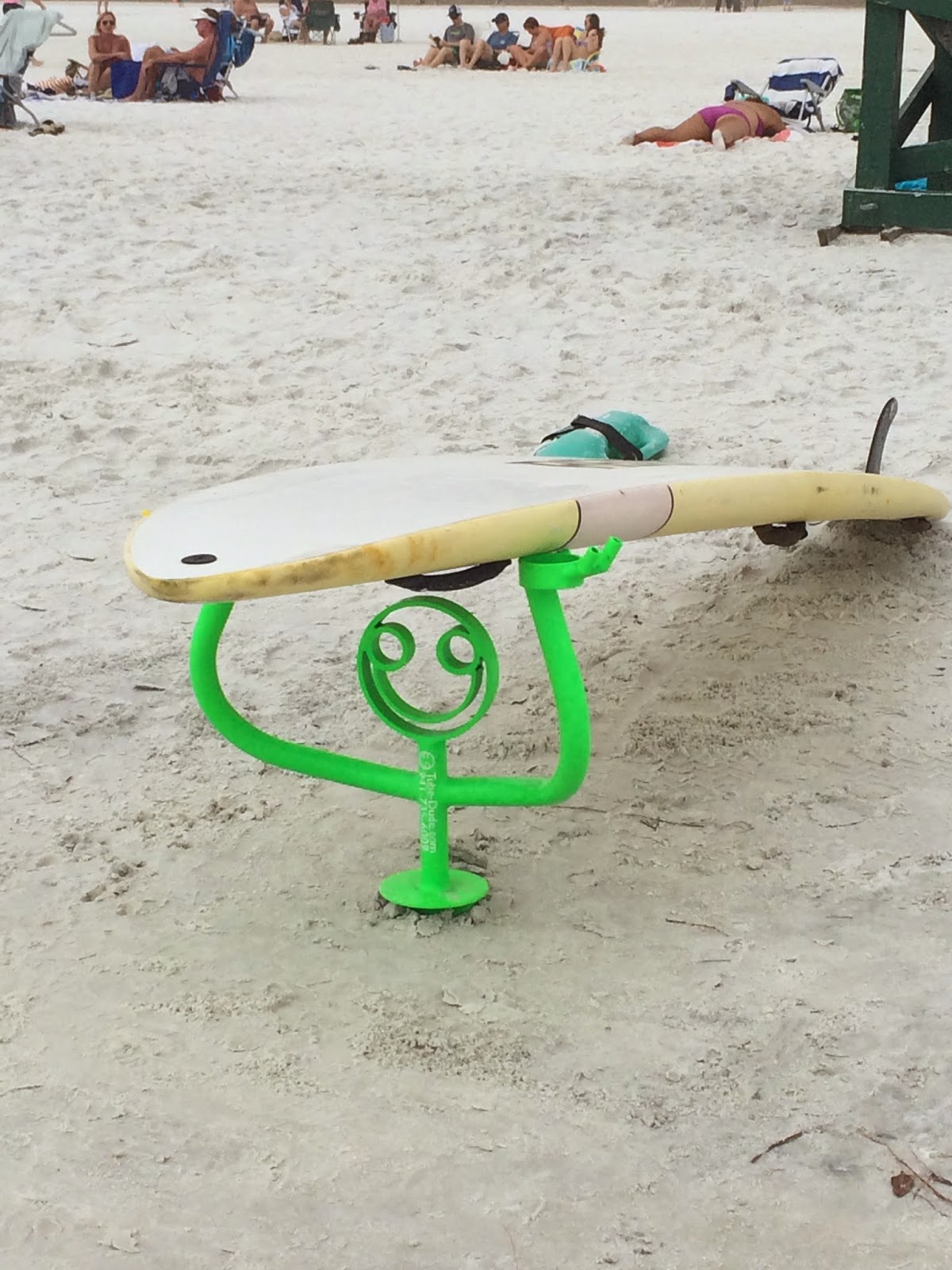 It was rather odd but by the time we left this is what it looked like and it was just a few hours later!  Sea fog began rolling in.  The Gulf coast had this happen most of the week while we were there. 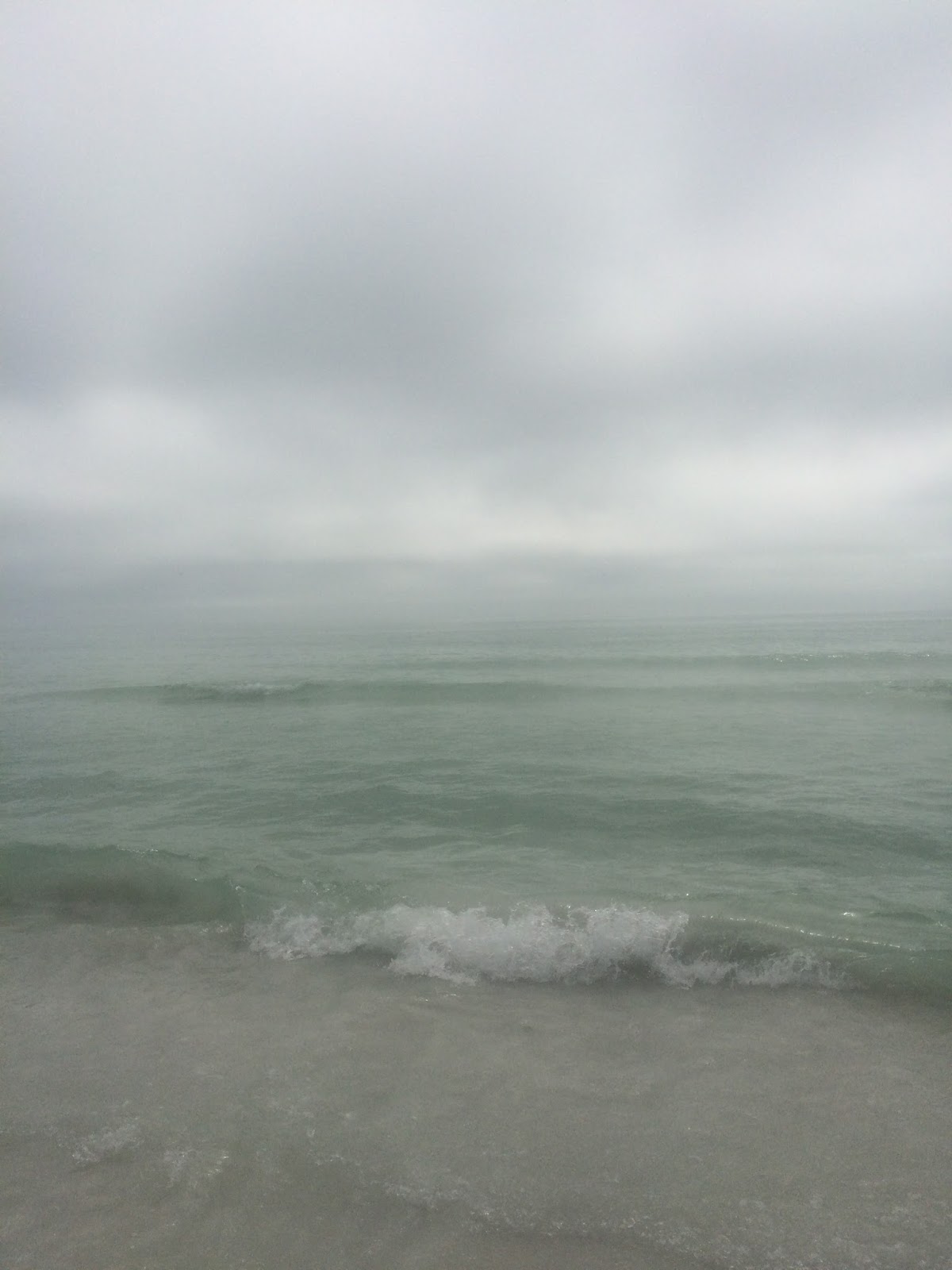 The next day we drove down to Venice Beach.
It was pretty chilly for there and the water temp was in the 50's so no swimming for us.
Look at the difference of the sand between the beaches.
The sand here looked like pepper where the sand at Siesta Key looks like fine sugar. 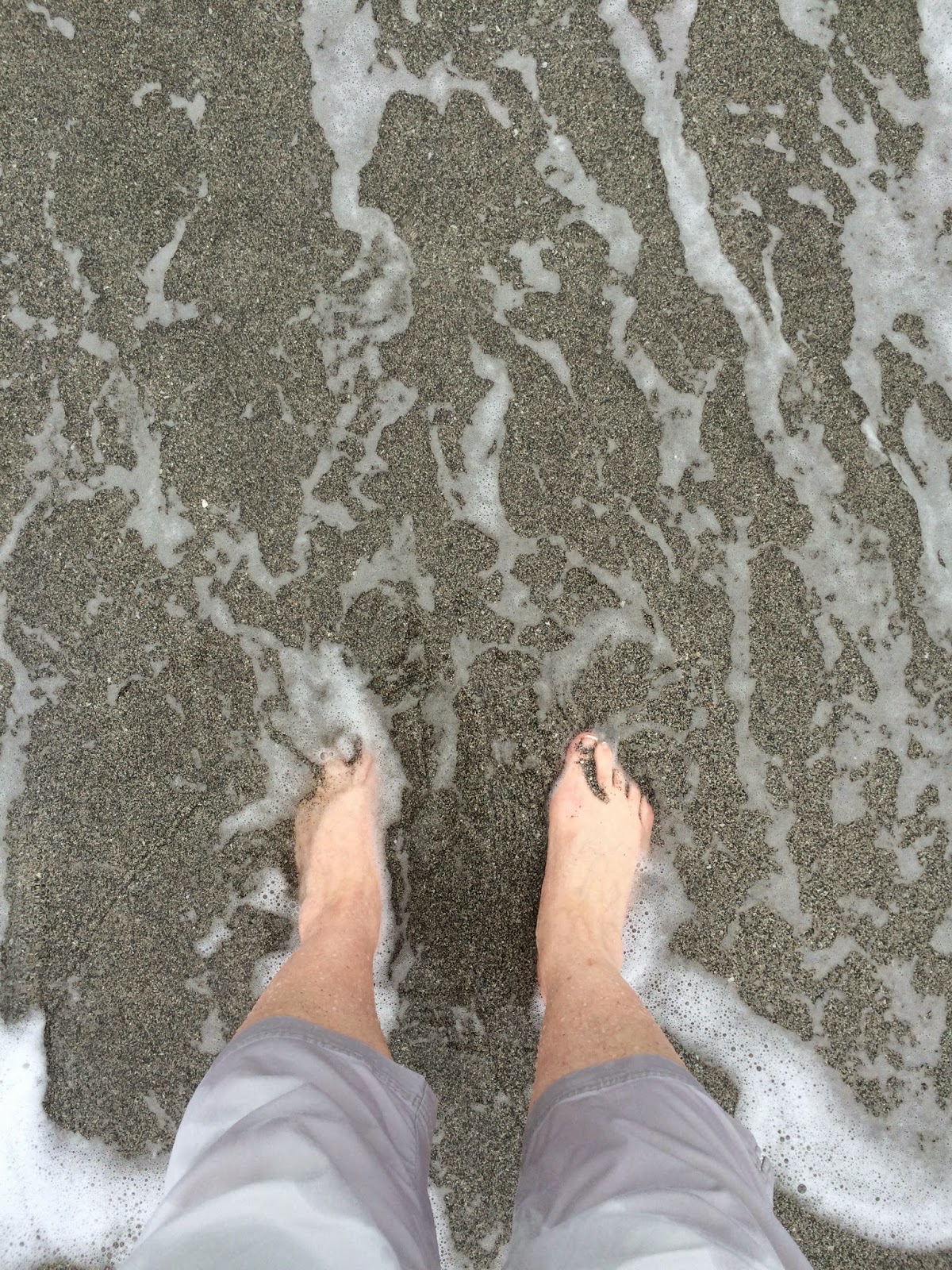 Venice Beach is the shark tooth capital of the world,
but we couldn't really brave the water to look for any, brrr.
We did see some brave people in the water though.
We didn't have any kind of sieve either, so there's that. 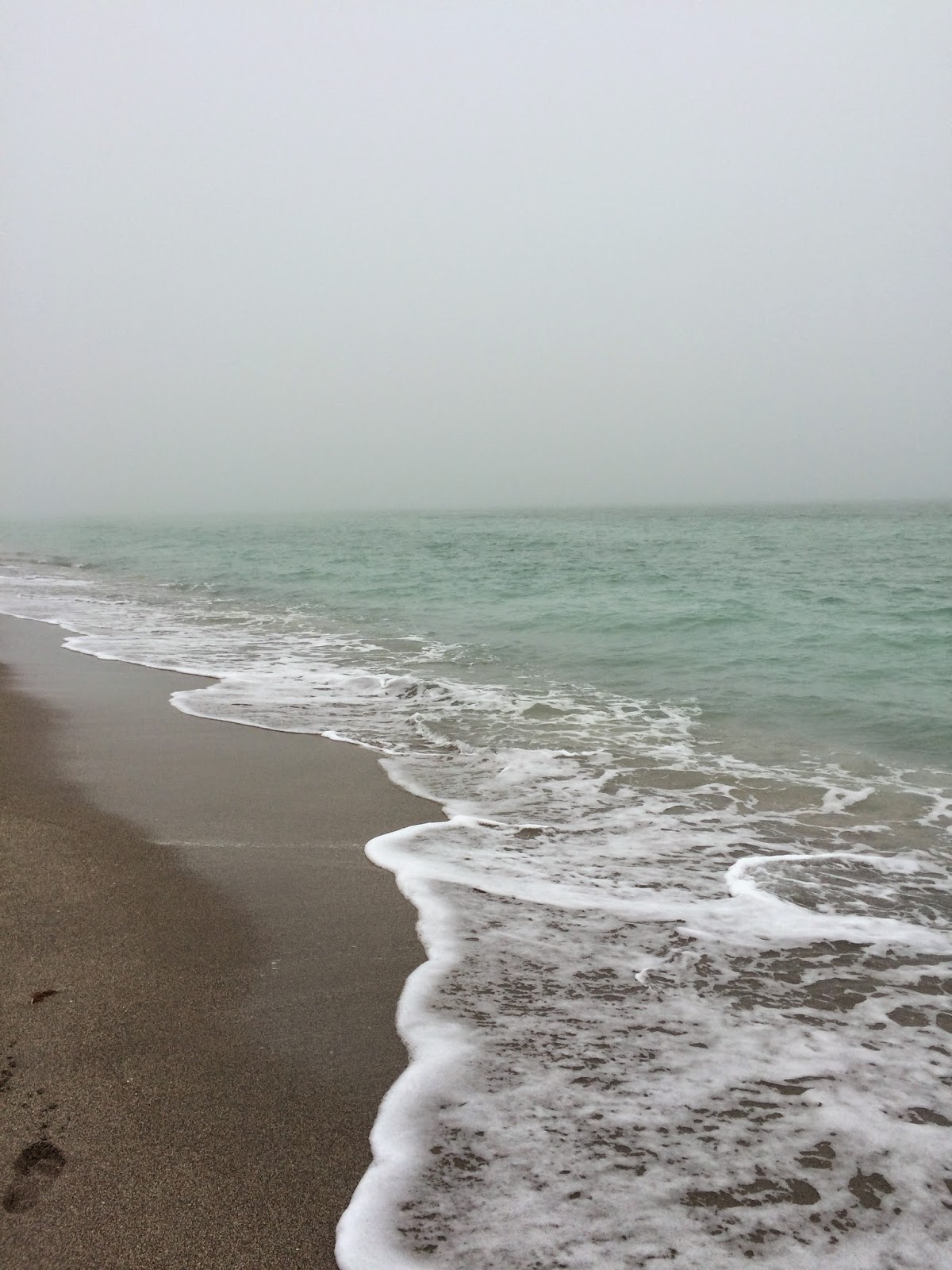 There were many of these crazy birds though.  I have since found out they are Royal Terns.
Their black feathers reminded me of Einstein's hair! 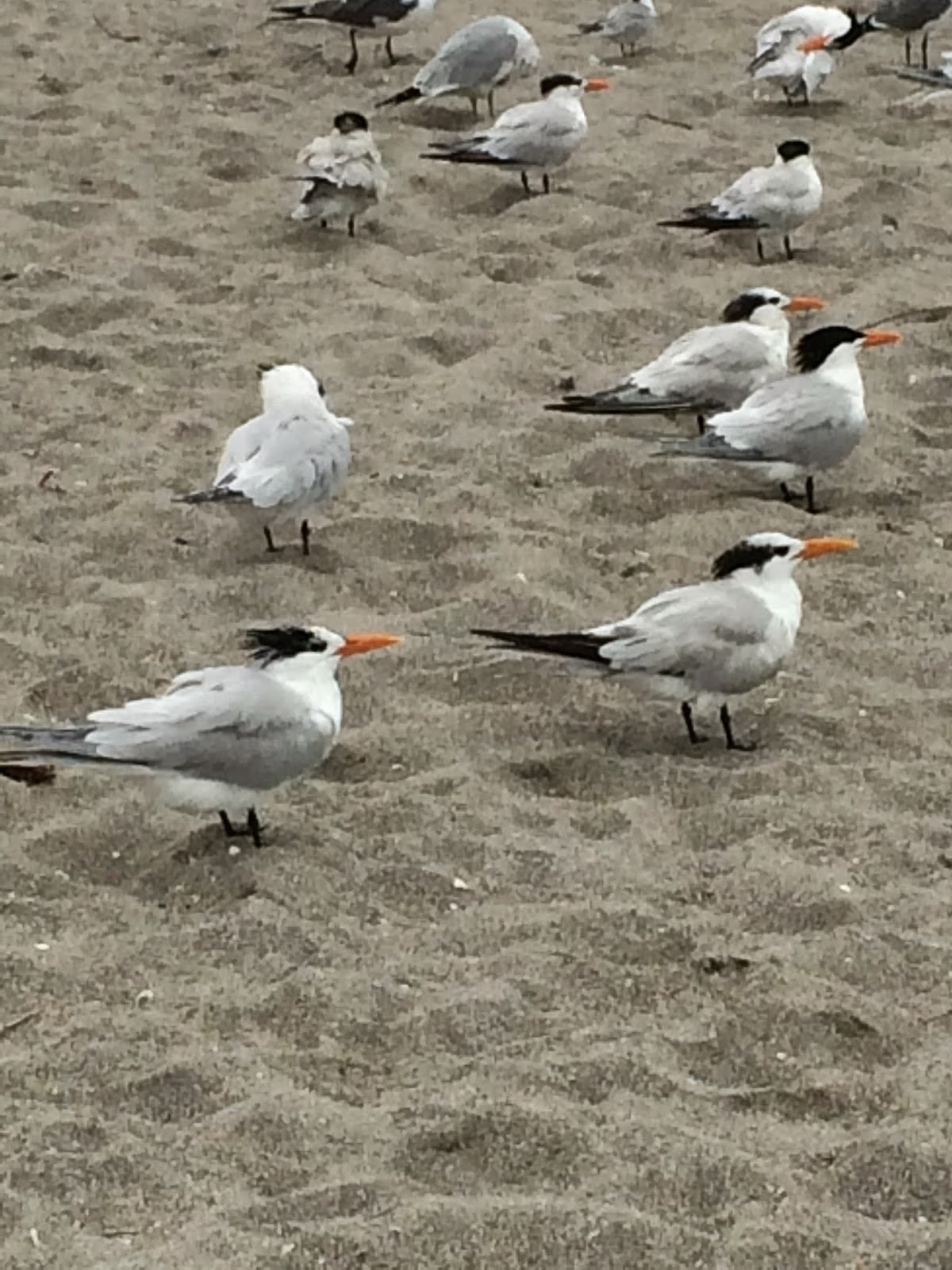 We stopped at a little quilt shop in Venice and I found these OOP Tula Pink prints.  Yay, Score! 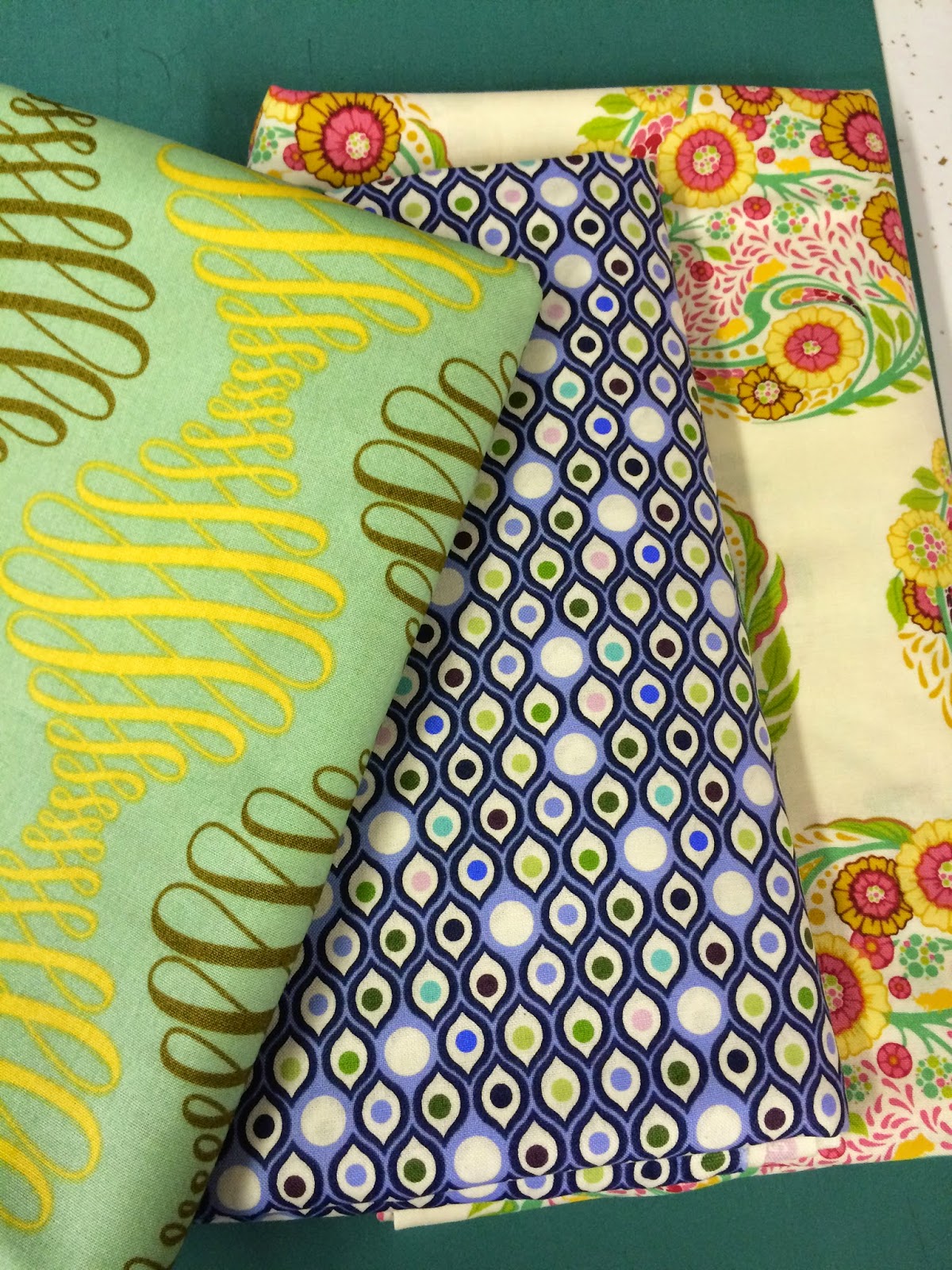 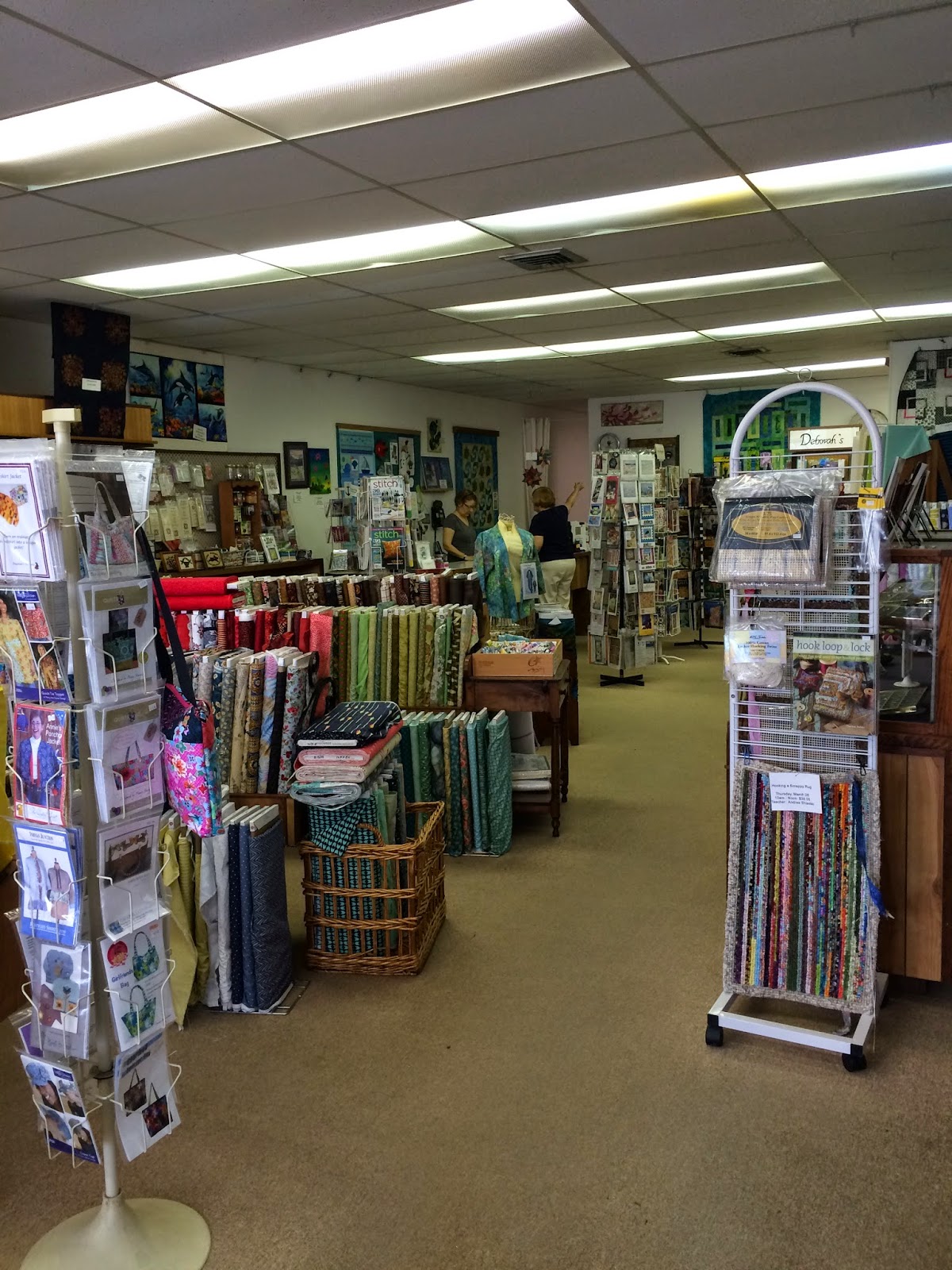 Chris was in his glory fishing all the ponds around the houses where his folks live.
He caught a lot of Bass.
There is more to share but I don't want you to have too much excitement so will save some for later. 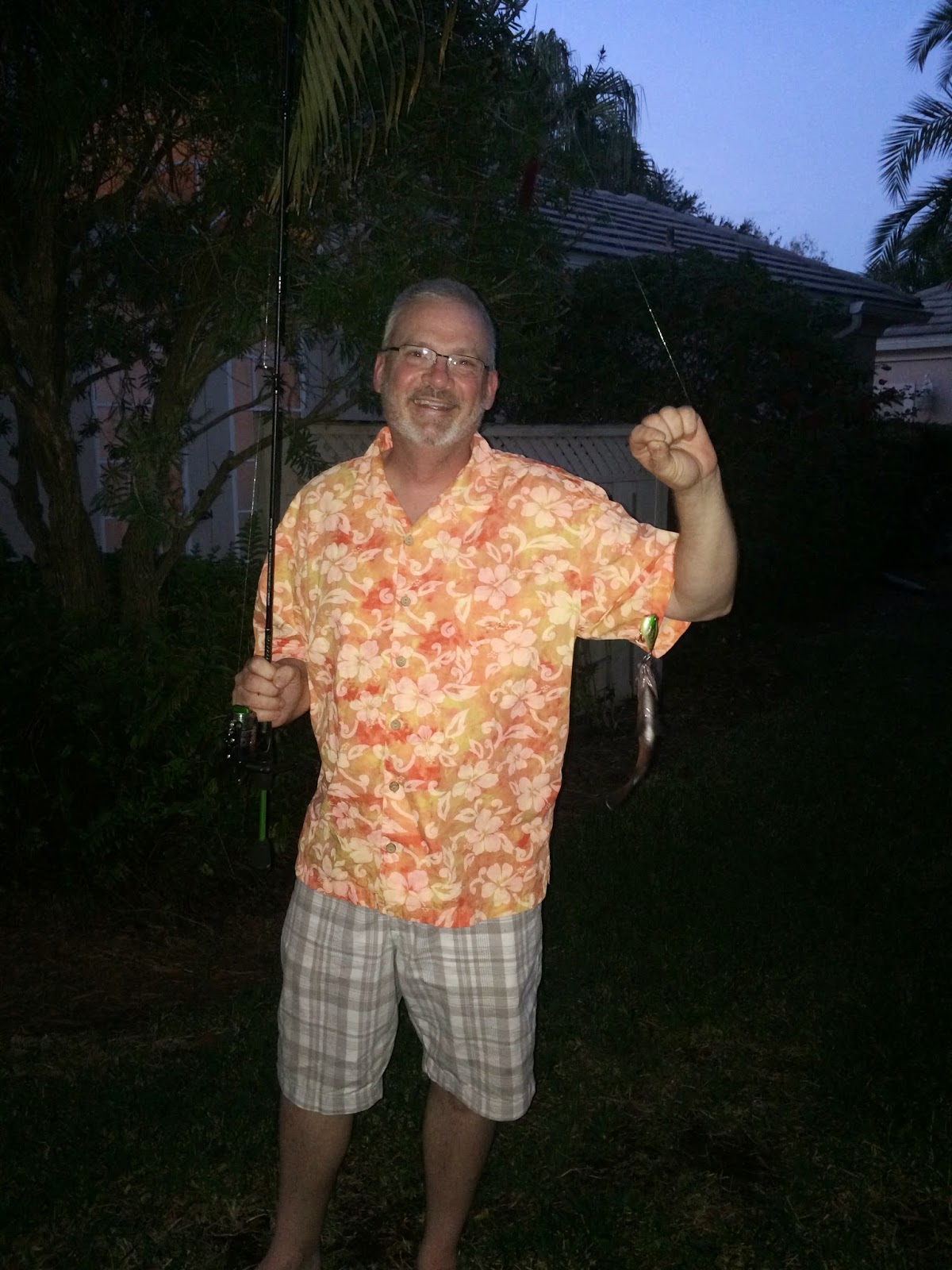 I probably should talk more about the drive down and I will in another post.
I bought some fabric at the 2 shops we stopped at but I need to take some pictures
so will stop here for now.

I hope you had a good week while I was away being totally lazy!

Looks like fun. So were the locals blaming you for bringing the colder weather?

Total score on the Tula fabrics. Lucky you!

Welcome back! Glad you had a good vacation.

Sounds like you had a great vacation. :) Welcome back.

Glad to hear you had a fabulous vacation. It is always nice to get away. I wish I could see a vacation in my future...maybe 2016. I've been cleaning out cupboards, closets and draws.