Winter At the Farm

As most of you already know, my oldest daughter owns a farm.
She has chickens and pea fowl.
During this past week when we got crushed with snow it was quite the adventure for the birds too.

I thought I would share some photos from the farm.

Apparently Eclipse decided that she needed to go out in the pen.
Instead of following the already made path she thought she would venture out on her own.
She got stuck and started screaming until my daughter went out,
picked her up and carried her back to the coop. 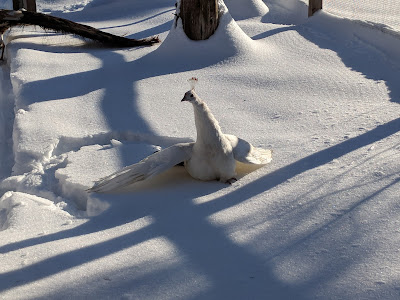 Orion flew out to his "screaming stump" and the was really upset that it was covered in snow.
He was giving my daughter the "I'm seriously offended by this" face until she went over and made him go back into the coop as well.
My daughter said, "see those other walking paths?
That is where the other girls walked out and went wading through the snow.
I had to step over Orion's train to hear them back into the coop as he refused to move!" 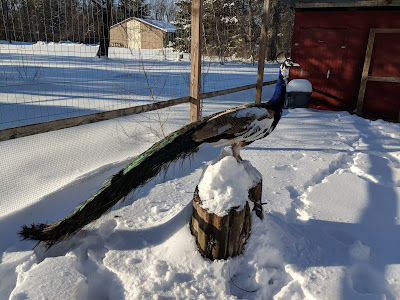 What sent all the birds out of their coop you ask?
She was trying to fix the rope lights that they had pulled down from the pegs in the coop.
That meant she had to walk on "their" side of the coop and they did not like that, not one little bit!  LOL  Silly birds!

This shows the depth of the snow on the path her hubby cleared out inside the pen so she could get to the coop to feed and check on the birds. 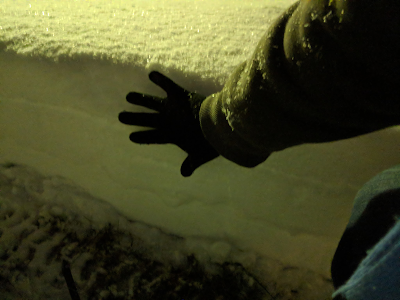 This was the woodpile covered in snow too.  To say we have had a snowy week is in understatement! 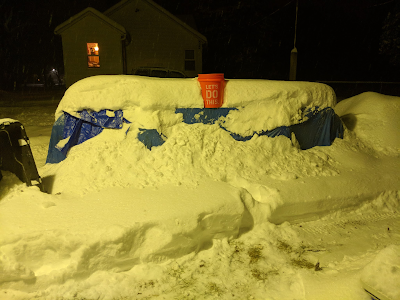 She took some snow into the barn birds and they thought that was just GRAND! 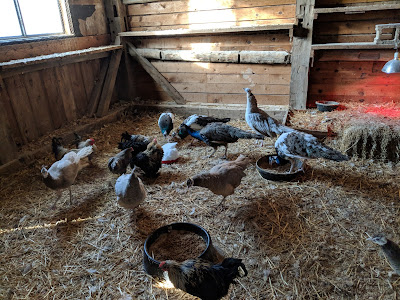 I just thought I would share with you all the latest with the birds.

All of the photos are my daughter's,
(thank you for sharing!)

Definitely silly birds! Of course, snow is probably new to them - I think I'd be upset too!

so glad you shared

Thanks for sharing, Pam. You sure did get a huge dump of snow. We are having some freezing rain today. Roads will be a nightmare. The pea fowl are gorgeous birds.

So many different birds....that's a lot of snow.

Yeah my chickens are not fans either. At least I don't have to go rescue tem.

Really cool birds! Thank you for sharing. Have a fun day!!