This should be the last of the vacation photos.  Whew...right?  This is Snoqulmie Falls in the cascade Mountains.  DH said you could walk down to the bottom but the path was closed due to a fallen tree.  (I wasn't really too sad as it was really cold!) 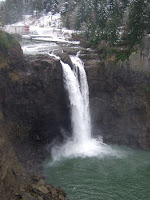 I just love those "You are here" maps don't you?  So you can see exactly where we were in relation to Seattle.  Quite a ways away.  DH sure gets to some interesting places without me!  Lucky he wants to go back and visit them with me too!! 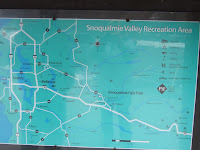 I laughed so hard when we saw this stop sign.  It was on the way to Roslin after we left the falls. 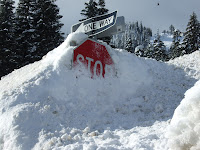 One of my favorite mountain shots.  There was actually some blue sky.  It didn't last for long and most of my photos have gray sky.  This was at a little motel just past the stop sign, in the mountains. 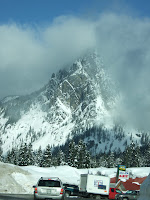 If you enlarge this you will see the same mountain in the back on the left.  The roof is on the second floor.  I love the gigantic icicles! 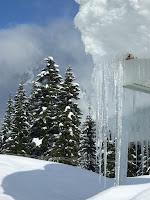 Yep...there's me so you can see how much snow there really was!! 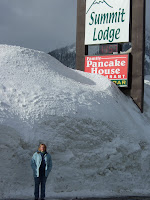 Does anyone remember the TV show Northern Exposure?  It was supposed to be in Cicile, Alaska but was actually shot here in Roslin, Washington.  (DH knows lots of this kind of thing)  the small town looked just like in the show!  The names of the shops were still there but the memorabilia store was closed so we just looked in the window, bummer. 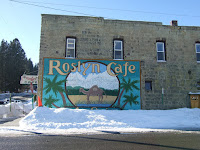 We had to decide if we wanted to drive another 2 and a half hours to Mt. Ranier or just head back (we had been in the car forever!)  I opted to head back if we could make a stop or 2 on the way = )
Dh is good to me and we stopped in Auburn, WA at The Calico Cat shop.  It was a really nice shop with lots of friendly people there.  I picked up a pattern for a mouse pin cushion that is so cute and some Koi fabric to make a pond for DD1.  Photos hopefully tomorrow of the fabric, not the patterns as Liz the Whiz has them for now. 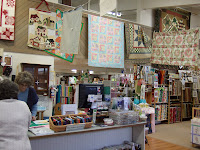 The final stop before heading to our room was Carriage House Quilts.  It is in an old house.  They had a lot of fabric and the people were very nice.  The lighting was not so good for these old eyes though.  I bought a sale Christmas fabric and 2 books that were 50% off. 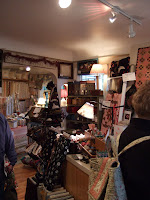 At this point DH escaped to the car so I didn't stay in the shop for very long.  He was a super good sport!  We met up with the other pilot and went to dinner at a place called Anthonys.  It is located in gig Harbor.  They had a sunset special that was to die for.  I got the salmon of course.  The guys were laughing when the waitress lit our candle on our table.  When I asked what was so funny about someone lighting a candle they cracked up and finally told me that this usually happens when they go out to dinner, a nice view, a romantic candle for atmosphere and them...sitting across from each other!  So the other pilot pushed the candle between us and everyone thought this was much better.  I guess DH should not have let me take my camera as their carpet was just fascinating.  It was salmon swimming upstream.  Isn't it neat?  you know you would have wanted to take a picture too.  It might be in a quilt later, right?  They just kind of slouched down in their seats when I took the photo!  HAHAHA. 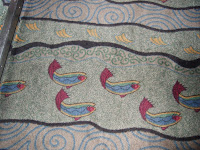 Now, this is totally unrelated to the trip but my friend Ellen sent me this in an email and I thought it was so cool.  You *Need* to try it!  It is the birthday calendar.  It tells lots of interesting stuff that happened on your birthday.
Sorry to Rhonda for not having a chance to link to her give away before now either.  I ended up going to the pediatric ER to visit a friend and her 3 week old baby at 2 so never got back to the computer.  Anyone can enter, you just need to link to her giveaway.
I have photos of Texas and the up close quilting and hopefully some of the charity quilts for later this week.

You were in my old stomping ground! We used to live in Issaquah. I've been to most of the places you mentioned. In fact my best friend lives right under that mountain in North Bend. I have to read more of your blog and find out what you are doing there this time of year. Summer is so much nicer!

Looks beautiful! I can't wait to see the goodies :0).