I worked a LONG day on Wednesday.
Met my daughter for dinner in Ann Arbor because
I was going to stay for the AA Modern Quilt Guild meeting.
The meeting was great!
Brenda, of Pink Castle, had moved into her shop and was having the meeting there.
At the end of the meeting we did a stash swap.
Everyone brought fabrics and we put them all on one big sheet.
Then on "GO!" we all leapt into the fray for fabric.
You know we don't have enough at home right?
This is the stash I went home with.

Can you SEE all those Tula Pink strips?
Two Neptune squares some Hope Valley and some AMH.
Not to mention the adorable foxes and some Kaffe.
I was so happy!
It was such a fun thing to do.
I got rid of 2 grocery bags of my fabric and only brought a wee bit home. 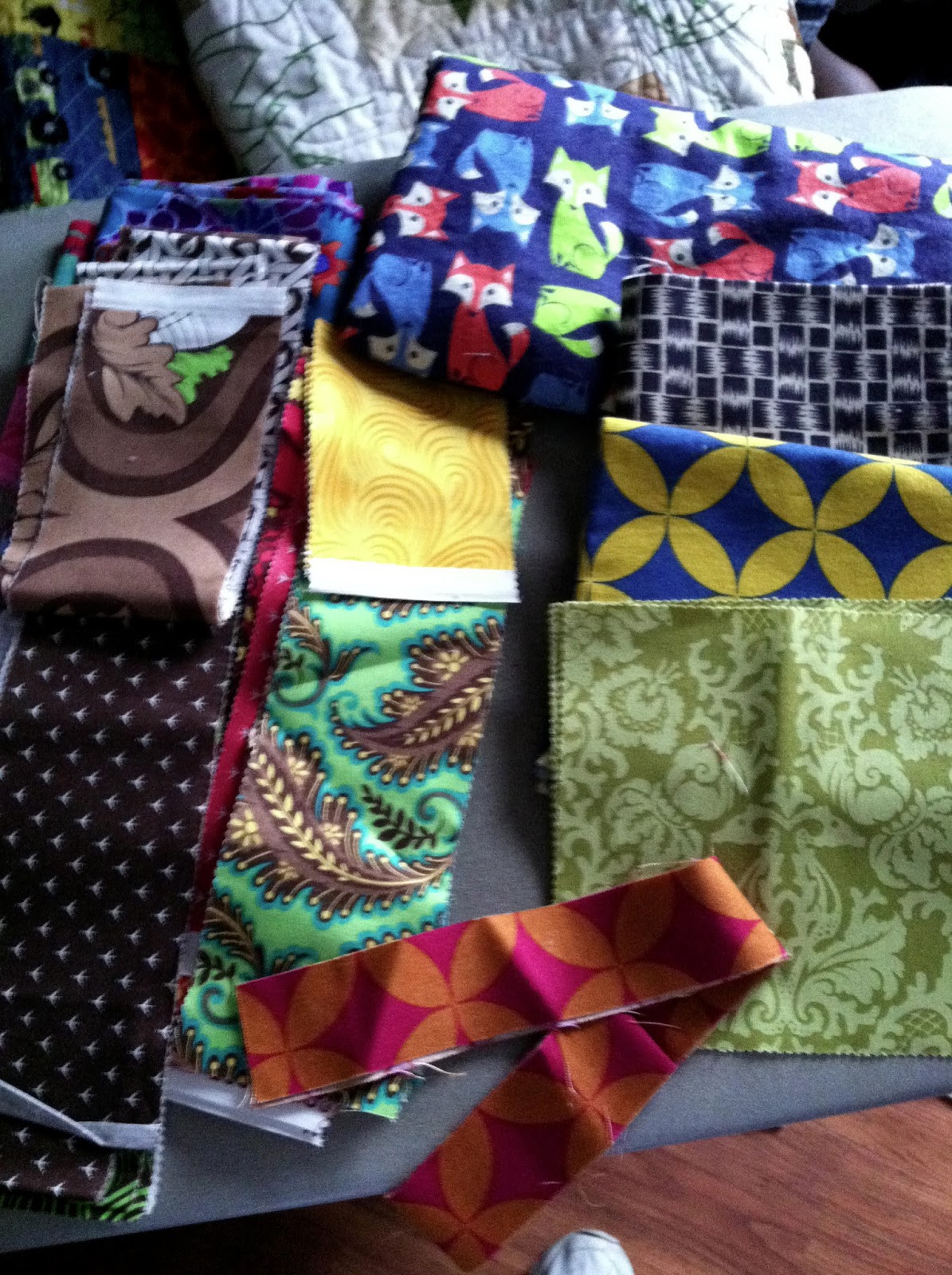 So by the time I got to my home it was after 9pm and I was exhausted!
I picked up the mail, put some chicken in the oven to make chicken salad for my lunch on Thursday and sat down to watch the latest episode of Supernatural (Love me some Sam and Dean!!)
I realized I had not opened the mail so went back to where I had dropped the mail
to find an envelope.
I was thinking it was some of the Swap packages I have been waiting for
to close up round 4/5 in the Tula Pink swap.
I looked at the return address and it said it was from United Notions.
What on Earth would they be sending me?

Inside was a magazine.
OK, nice but a magazine?
There was a post-it note inside (I put it on the outside for you to see) 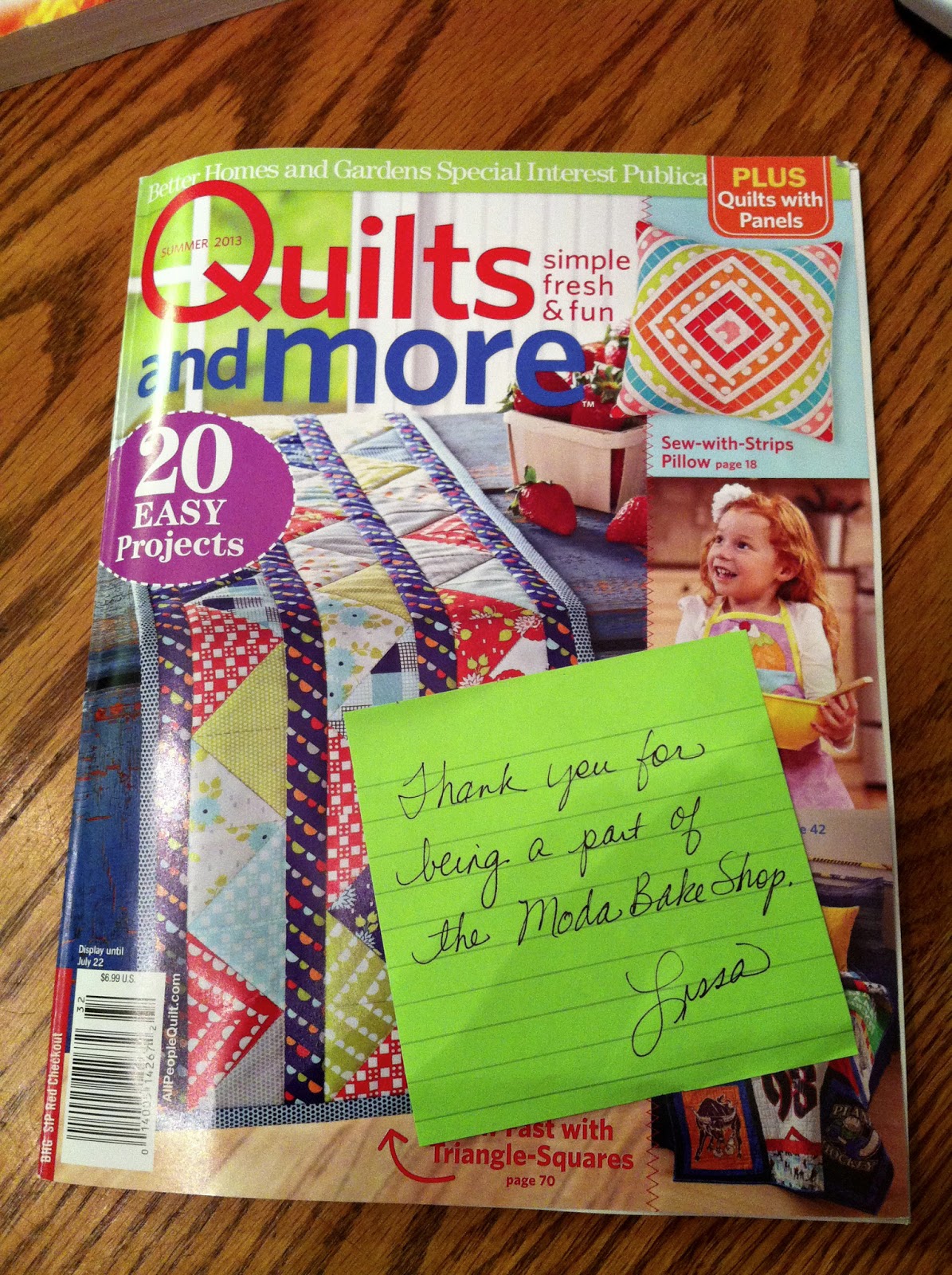 I opened the magazine up to the inside front cover (the post-it was on the right side)
and this is what I saw... 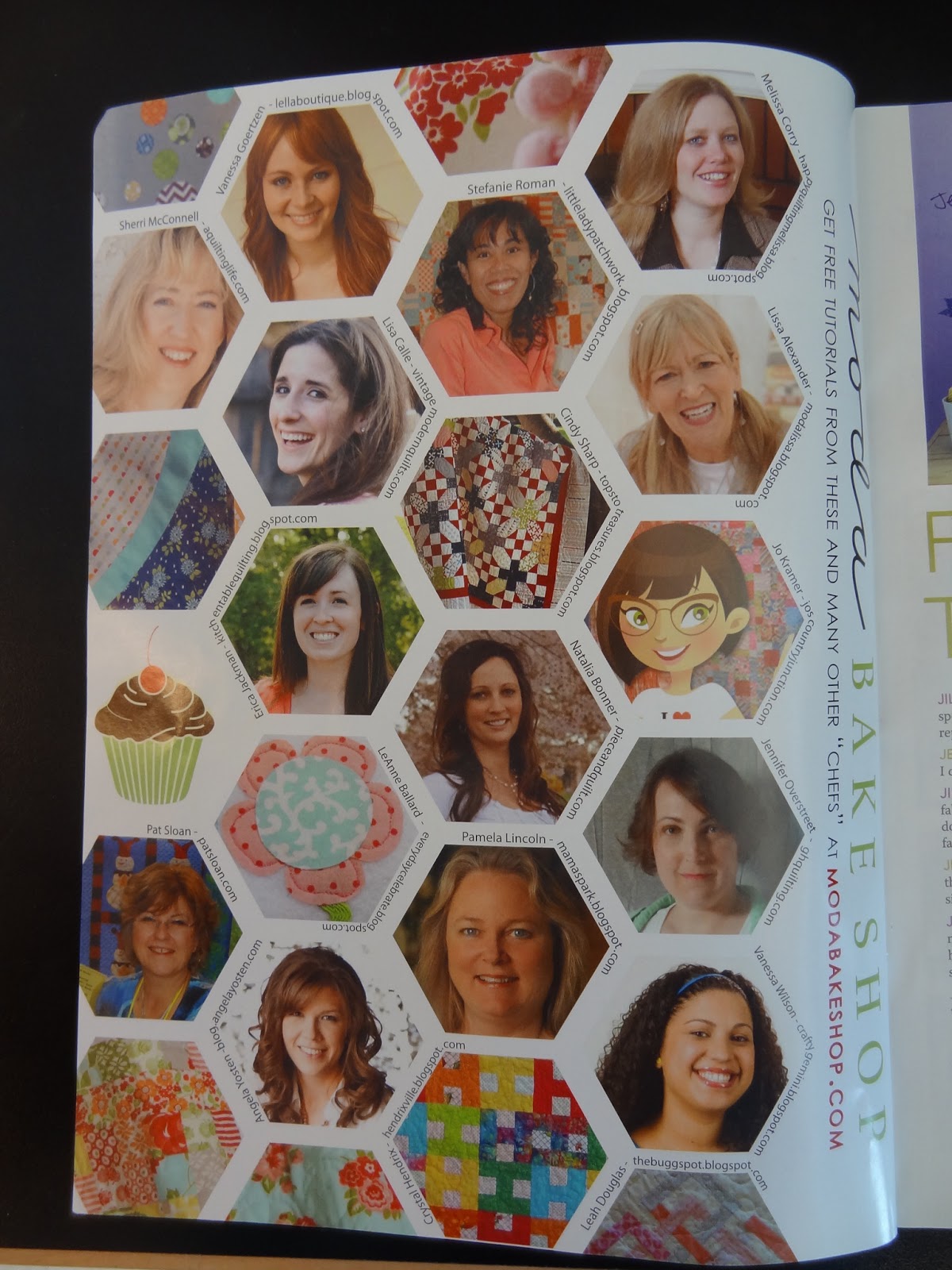 A photo of ME in the Moda Bake Shop advertisement!!!
I am in some pretty awesome company too I might add!

I had no idea they were going to do this and it was so exciting!!
How fun to be part of the Moda Bake Shop!!

Thank you for including me in the ad, you made my week!!!

I hope you are having a good week too.

Weekend plans?
I may be working on a super special QAL with my daughter and some quilting friends
so there's that.

Congrats again on the front inside cover photo!! It sounds like you had a LONG day and then you came to do more work by putting the chicken in the oven. Woowheee!!

A quilting project with your daughter? Interesting...

Congratulations! That is a fun group to be part of :) How nice of them to send you a copy of the magazine.

Congratulations!! What great company to be sharing the spotlight with.

How cool! I think you fit right in.

Congrats. How cool. I didn't know that Pink Castle had opened a shop. Where is it located? My son lives in AA and I am there alot and would probably be there alot more if I knew where her shop is. They have great fabric.
Shawn

She isn't officially open until June 1st (I think). It's on Plaza drive in the complex across from Costco.(off of Airport road, I think) I'm sorry I don't know the exact address. Her shop used to be out of her home in Ypsilanti and you could go there and shop too. I will try to get the address, but if you leave a note on her blog she may tell it to you too = )

I am not from Ann Arbor I live in Canton but I work at the U in Ann Arbor. I hope that helps!

PS You are a no reply blogger so I am leaving you a comment here in hopes you come back to see it.

Wow what a cool surprise! Always love it when one of my blogging buddys is a celebrity. :0)

Pam
Thanks for the info on Pink Castle. I will contact them and can't wait till the opening. I tried to follow your directions to change from a no reply blogger but cannot see the find the show my email check box.
Thanks again for the reply.
Shawn