So lacrosse season signals spring you say? Everywhere but in Michigan Today DS's team could have their first organized high school practice...outside! This is one tough bunch of boys! This was part of the warm ups. 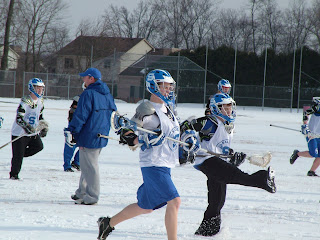 These were sideways walks. 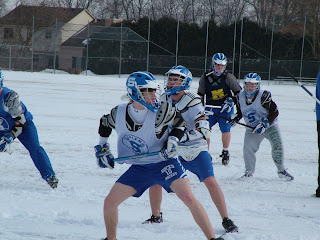 This is my DS! 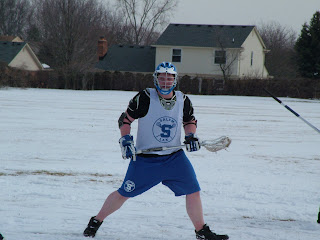 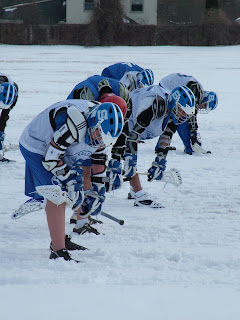 Stretch some more, it will warm up your muscles! 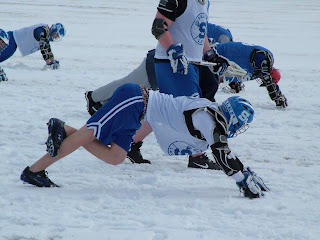 Whenever they dropped the ball and had to scoop it back up there would be snow in the cross (the net part on the stick). The coaches told the boys to shake out the snow before passing, but you know how boys are.. 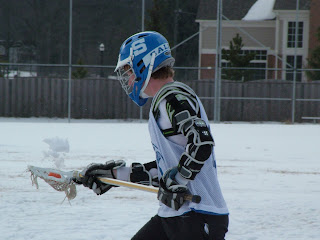 They thought it was funny to catch and throw the ball and the snow at each other. DS again. 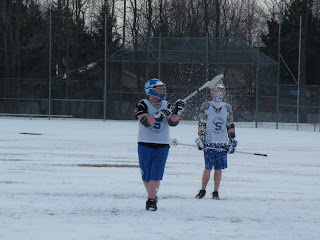 They had to use colored balls so they could find them in the snow. Usually the balls are white. I thought this was a cool picture! 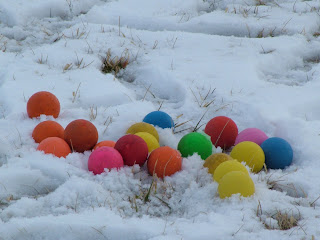 Now the coaches told the boys that whoever passed the ball, if their throw was so bad that the other guy couldn't catch it the thrower would have to chase the ball. So one of the coaches threw a really bad pass and this boy told him he was going to have to go and get it! I laughed and had to agree, it was, after all what they had said. The boy told the coach that I agreed with him and he had to do 20 down ups in the snow. 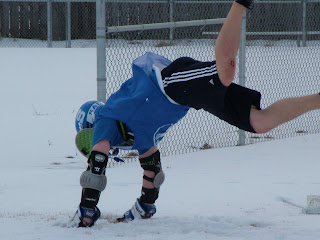 When he was done I reminded him that whatever didn't kill you makes you stronger. Sorry about that Popa!

I hope you all enjoyed my pictures of spring in Michigan! My hands were frozen and I was only out there for an hour and a half. I had 2 sets of batteries and both went dead. I took almost 300 photos but didn't think you wanted to see that many. If anyone wants to see the rest you can go to the picasa album at http://picasaweb.google.com/mamaspark/ChickenBBQFirstPractice2008

Thanks for showing the pictures I had never heard of Lacrosse before, those boys are doing well exercising and practising in the snow
faithx

I remember Lacrosse in school. It seems it was always COLD when we had it.
I love the pictures. I think the colored Lacrosse balls look like spring/easter/warmer weather coming/maybe a quilt inspiration?