The Journey of the Ugly Quilt

So...you might be wondering why the journey of the "Ugly Quilt" begins with a photo of Autumn?  Well she was *helping* me work on the quilt. 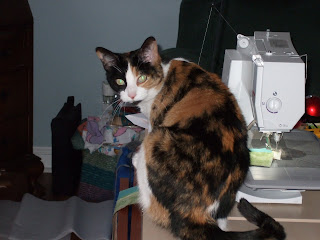 As you can plainly see this poor quilt simply did NOT have enough cat hair on it nor were the strips quite random enough to suit her highness.  Hence the "cat mixing".  Thank you Miss Autumn! 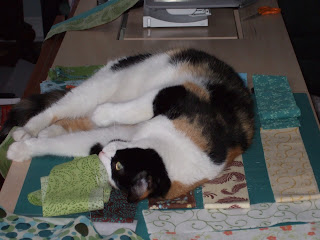 Well, fatty, I mean Aiden, needed to see what had caught her sister's attention and she decided it needed even more cat hair.  So she positioned herself to help me out with that.  lord help *anyone* that receives a quilt from me that is allergic! 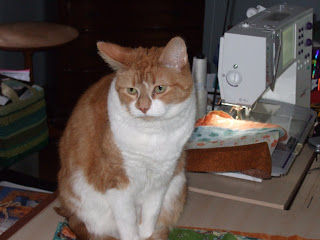 So now that you know all about the furry helpers (Jack and Mosen visited also, sorry no pictures) I will talk a little about this quilt.  for Christmas my friend, Ellen, gave me a tin of FQ's.  Not my colors(except for the aqua dots which is fabric I had to add to make the numbers of strips work) but I decided since they were upstairs they had to be in the que for finishing (anything that is "upstairs" has to be finished first).  Now I really do NOT like the colors but I decided to make something with them anyway.  I found a pattern that I thought lent itself to this and didn't look like it would be too difficult to do and that I wanted to try making anyway.  I had to cut the fabric into strips and make strip sets.  Well, the pattern called for 42" which meant I had to sew my strips together to get the length, which I did.  Making the strip sets took longer than I thought but they are all finished now.  I need to cut them into squares and cut the squares diagonally into 4 triangles, rearrange and re-sew.  Presto change-o, we'll see how that goes.  So I was just curious what any of you think about these colors and fabrics? 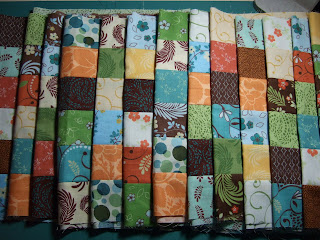 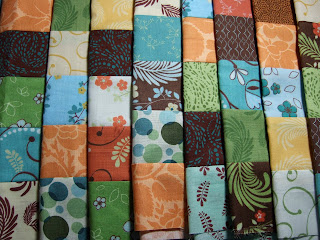 Here is the actual pattern. 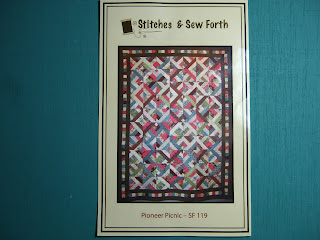 I'm thinking this will be my contribution to the U of M raffle, which is good as it will be done early and cost little as all but the back will be from fabric I already have (and was actually given to me).  I will, of course, go through the stash and see if I can find a back too.
An interesting thing occurred while I was cutting this quilt out.  I noticed a HUGE rabbit in the snow in the front yard.  It was so beautiful!  She just sat there are stared at me and finally dashed away.  Well, I wondered why, in the middle of the day, a bunny would be in the front yard?  I usually see them at dawn and dusk, mostly.  So I opened the front door only to see the neighbor's cat, Sony poking his head in the hole in the bushes where, I am assuming, said bunny had just come out of.  So I chased him away and hope he leaves the bunnies alone.  My cats do not chase the bunnies, they are afraid of them.  But...mice and voles BEWARE!

Such wonderful and cute helpers you have! How can the quilt be ugly if they are helping? The fabrics look very retro. They are pretty colors, but just not my cup of tea. They are popular, though. I just haven't jumped on the band wagon for them.

I get lots of help too!

Isn't it funny how everyone has different likes/dislikes. I LOVE those color combinations!! Even though you don't enjoy them, I am sure someone will see them at the auction and just have to have it!!!

I like the color of the orange/white cat..does that count? Jack is purdy.

Honestly, the colors are very retro. Looks like the colors we wore in the '70's. Everything comes around again.

You know, with so many other colors playing nicely with the orange, I think it will all look okay and pleasantly pleasing.

I get lots of help from my lurchers!!! the fabric collection reminds me of 70s style, someone will like this, Im not a brown colour fan, but you have got an interesting combination there that will make someone very happy.
The rabbit sounds lovely, was it a wild on or someones pet rabbit that had got away?

I actually like the colors here. And that orange floral tone on tone? Yeah -- um, I have a couple of yards of that in my stash. Actually, it was a close contender for a doll outfit for my daughter for Christmas :0). But I do understand that not all color combos are for everyone :0).