"What Did You Say Was In The Bag?"

Ok, I have spared you all the latest "gifts" from the cats. But a few days ago when I stepped out the front door on to my front porch there was a young bunny. I hate seeing dead things so early in the morning. Then 2 nights ago, Autumn, the calico in my header, was seen dragging a poor bunny from my deck (that she was trying to bring me and it was half dead). So last night DH came to me while I was sewing with his travel bag. He had been gone for an overnight trip, came home and left his bag in my living room near my sewing stuff. He had emptied it out but was taking it back upstairs to repack. Then a few minutes later he came to me and announced,"the cats brought you a present". I was so afraid so I carefully peeked inside the bag and found THIS! Looking back at me!! A baby bunny!!!

Isn't it so sweet? But I knew we should not keep it. I was terrified to put it outside since not all my cats were in the house. DD1 is holding it to show you how little it was. 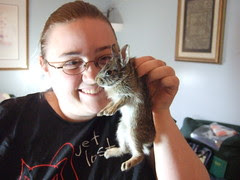 We got an aquarium to put it in but I felt she would probably not make it through the night because she had no food or water all day the day before but I had to try. look who was curious about what was in there. (sorry for the blurry pic)

As it turns out, she didn't make it through the night and I buried her in the garden with a little prayer before I left for work today. RIP little bunny!

How sad! Baby bunnies are so cute.
Darn cats :(