I can't believe a whole week has gone by and I have not blogged or written about the wonderful retreat I went to with the Ann Arbor Modern Quilt Guild.
The retreat was held at the Hankard Inn and the facility was fabulous.
As a bonus we had our breakfast and dinners provided so no cooking!

I went with WAYYYY more than I thought I would be able to finish, but did not want to run out either.
I had some specific tops that I had to get done.
I managed to get three of those tops completed!!

First up was the wedding quilt that I have to gift in a few weeks.
The back is also finished and both are at my quilter to finish. 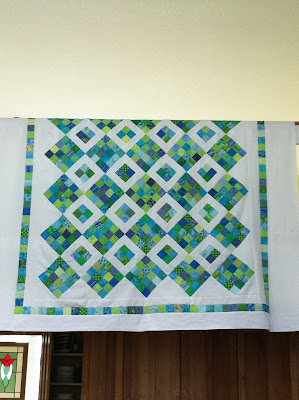 Next up is the paper doll quilt.
I can only say that this one has a special destination but will say more once it is gifted.
I love how it came out.
Not sure you can see but the border was done using a lot of I-Spy type of blocks.
I managed to get the back sewn up for this one too. 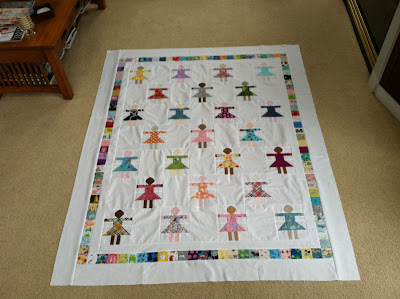 Last but not least was a real oldie.
I bought a traveling design wall and went over to a friend's house to lay
this One Block Wonder out using the wall.
I pinned all the blocks on the wall at that time.
I managed to get a few rows sewn when I had to pick it up.
It had been folded up in a drawer for a few years now.
So long in fact that the plastic bag was disintegrating!
I really miss that wall so this one was up next so I could reclaim my wall.
When I took it out of the bag it looked like this. 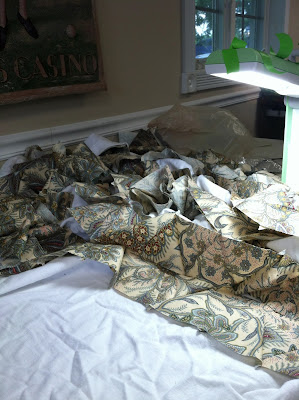 I had to press EVERY block before I could assemble them.
Many were not the right size so I had to trim over half of them before I put them together too.
This is what it was beginning to look like as I moved forward. 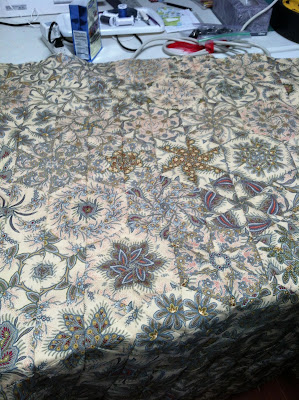 I had gotten up at 7am and worked all day.
The Doll quilt was finished by lunchtime and after lunch I started this one.
This is what it looked like around 1am!
All finished.
Don't look too closely, there are 2 that don't have the correct pair.
Pretty good all things considered.
I am not in love with it, but happy that it is now finished.
I will be donating it to Margaret's Hope Chest, where I hope someone will love it!(mistake and all).
I just can't bring myself to make the correction now that the whole top is complete.
What would you do? 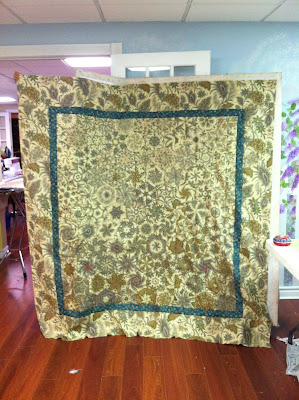 I do have some more pictures of the rooms we were sewing in and other people and
theie works but will have to save that for another post.

I also managed to get the borders and sashings cut for 2 additional quilts so hope to get both of those tops done in the near future too.

Trying to bust some UFO's!

I had some minor surgery on Monday and am still a little uncomfortable.
I had a couple of dermatofibroma's removed.
One on my arm and one on my leg, so I have some new holes and stitches, ew.
Both were benign which is good.

I hope you all had a nice 4th of July.
I will write more later about the rest of the retreat!

I love the wedding quilt, great colors! Also the one block wonder. I would bet that the photo does not do it justice. Feel better!

oh my gosh, girlfriend - you got a LOT done!!! the wedding quilt is lovely!!! but i really, really love those paper dolls - they look like they are holding out their arms to give big old hugs!!!

you are making me feel not so guilty that i bought the book and the fabric for a one block wonder and never made it - it looks way, way, waaaaay too complicated for me...

anywho, i am happy to see you back in Blogland - take care of those stitches (that was not the kind of stitching that i had hoped for you)...

I also love your wedding quilt. Both the colors and the pattern are gorgeous. What pattern is it or is it some combination you made up? You're too good, you know.

You sure did accomplish a lot at Hankard Inn...it is a beautiful place to do nothing but stitch the whole weekend. The bride and groom will love their wedding quilt...it's gorgeous. Love the girl's quilt too. It is at least 2 maybe even 3 years you laid out the one block wonder quilt. I had forgotten about the portable design wall. Your one block wonder quilt will be loved...oops blocks and all. What a great sewing weekend you had.

these look GREAT!! I was JUST talking to a friend about a one block wonder quilt/stack n whack quilts

Is there a pattern for the blue/green quilt? I love it!

I have seen these stack and whack quilts and I think I even bought a template to make one. But for the life of me I don't think an untrained eye would find a mistake in this one you just finished. I think someone will treasure it for sure.