It rarely happens that we have a weekend full of parties, but last weekend was one.
I was supposed to pick up a vintage sewing machine (more on that later) on Sat morning but could not manage to hook up with the person, so on to plan B.
We began watching the football game for while.
In the early afternoon we had to leave for a Clam Bake on Lake Erie with some friends.
Now mind you, I have never experienced a clam back and this was fantastic!
They dug a pit on the beach and made a fire.
It doesn't look big but the pit was like 7' across! 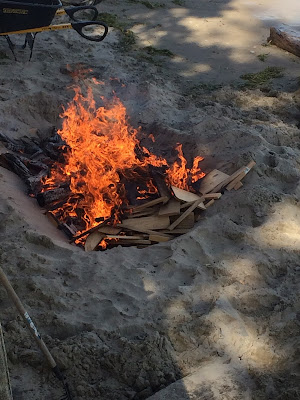 Then they bagged up lobster tails, clams, potatoes, corn and carrots to put in the fire.
I think they let it become coals, put on seaweed then the food then more seaweed.
It was fantastic. 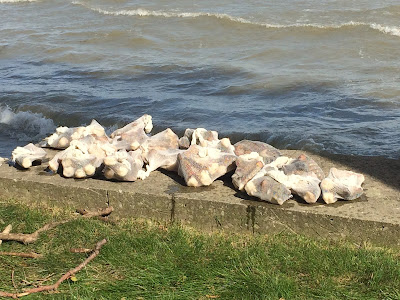 Unfortunately there were 40 mile an hour winds coming from the east across the lake.
Gigantic waves, 3-4 foot! 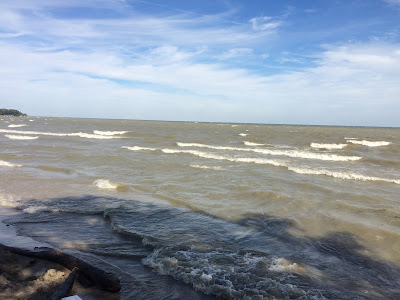 On Sunday we were invited to a BBQ at one of my new boss's house.
I don't usually socialize with my lab mates but the Chairman of our Dept.
(one of the new boss's for me)
personally invited me, so I put it on the calendar.

I managed to get some sewing done before we left, but did not manage to get any pictures!  HA!

I have been piecing a back for this most recent wedding quilt.
Is anyone interested in seeing the process I have been using to design this back?
I made three large squares (16") to have at the wedding reception.
People signed the squares and left well wishes.
I embroidered the label, on the same gray I used on the front (which I used on the back too).
I don't know about you, but I HATE sewing the label on after I make a quilt.
If I incorporate it into the back it is MUCH less painful for me.
Bonus that the label can't be removed either! 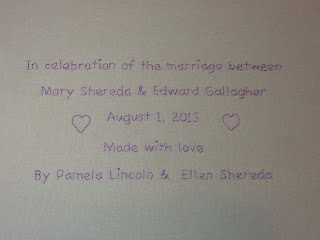 If you are interested in seeing my dimensions and how it put the back together,
I will take a photo of the graph and the back.
I still need one more piece of gray (which I hope to have tonight)
to actually finish assembling the back and then off to the quilter before I leave for NC.

Have a great Hump day everyone!

you and me, both, sistuh - if only i was a bit better about PLANNING AHEAD, the label would be said and done instead of an afterthought...

@Dianne, I have no idea why your comment is not coming through but did you know that if you learn something new you get to go home from work!?!

Clam Bakes are so fun! You can sort of do one in your own back yard if you buy a huge lobster pot and put if over a ring burner. We live near Lake Ontario and have seen some huge waves like that too.
Ugh - labels. I ordered tags to sew into the binding, but sometimes you jst need to say something more personal.