Now where was I? Oh yes, after lunch we headed into Shipshewana. First stop was E & S Sales. Have you ever been there? It's a great bulk food shop. There is this wonderful chicken stock (in granular form) that I would be LOST without! I use the heck out of it and Shipshewana is the only place I can find it. I think they must put some kind of drug in the stuff that keeps you coming back for more. It is seriously that good! I had a list from my DH of everything I needed to bring home. LTW and PTM picked up some bulk goodness too. Next stop was Yoder's meat and cheese shop. Came home with some bacon and this wonderful dried beef lunch meat and a package of cheese curds. Love Yoder's! We even brought coolers so we could bring home the perishables. Now that we had our foodstuffs it was time to hit the other quilt shops.

First we went to little bit of Lolly's. I actually bought a few things there. See the light green with the cream print on it? That's for a skirt. 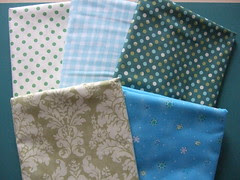 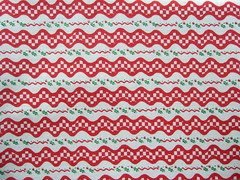 After we were done in there we headed upstairs to Lolly's. 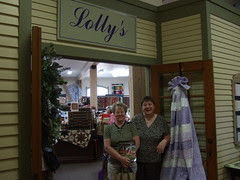 Here are the girls getting ready to shop!! Me?? I bought one yard of this, that's it! 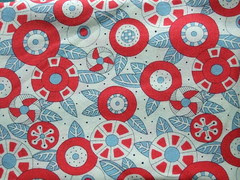 I did have a list with me but only found a few things that were on it. This was one of the things, so that made me happy. This quilt was hanging in Lolly's. 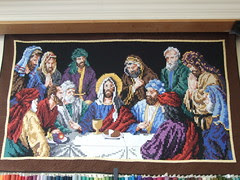 It was spectacular but they did an overall stipple rather than more detailed quilting. I found that a little disappointing.
We headed up to Vintage Home (I love that shop too). Love all the Fiesta Ware. 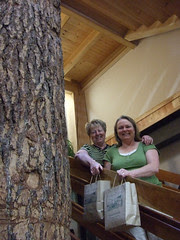 I was in Fiesta heaven, I tell ya! 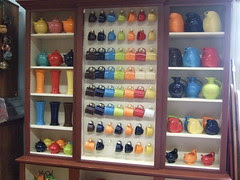 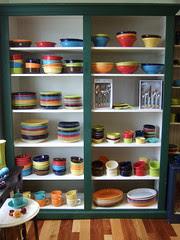 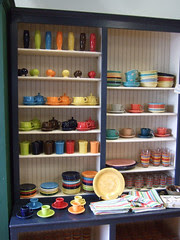 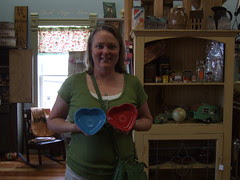 I just *had* to have these 2 heart shaped ones in aqua and red. Adorable! I also bought a few dish towels. Next stop Jo-Jo's pretzels, love em' and so did the girls. 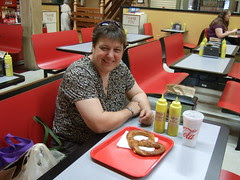 Just look at the smile on LTW!! It was awesome! The next to the last stop was Yoder's department store. I had to run into the general store to get some half gallon Ball jars for DH (he had a list too!). I ran those out to the car and then joined PTM and LTW in the fabric part of the store. This is inside the store. 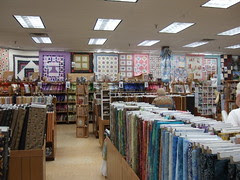 These are the things I bought. 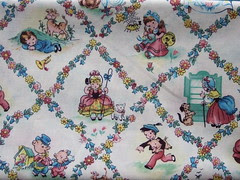 That nursery print was done up in an adorable pattern, which PTM bought so we can do one together. Then I found this fabric. It kind of reminds me of the Liberty of London fabric so I bought a little bit of some of the different ones they had. 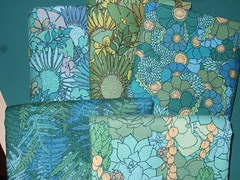 Last stop was the Bernina shop. I happened to find a foot I was looking for at half price! (Turns out it is the same foot my DH had bought me for Christmas!!). Anyone out there need a number 13 Bernina foot? I have one to sell.

After that we headed home. I don't think we could have fit another thing in the car! We drove to LTW's farm, had some food (left over from our awesome lunch) and I drove PTM and myself home. I got home around 11pm. It was a LONG but wonderful trip. Thanks, ladies, I can't remember the last time I had so much fun!!

Lucky you! I love going to Shipshewana too.

Drooling!!! Can I come along next time? (oh wishfull thinking!!)

Ooo so much fun you had!! I LOVE that Liberty-ish fabric you found, any idea who makes it?