What an Awesome Weekend!

MSU won in overtime against Notre Dame with a fake field goal!! So SWEET!!


Then our poor coach had a heart attack and had to be rushed to surgery for a stint. I understand he is doing well though. Hopefully we will see him back on the field soon.

In other weekend news, I met my friend, Shelby, for lunch. It was a nice time and we don't get to see each other too often. When I got home DD1 and a friend wanted to use my sewing machine to make a cover for her arm so it won't get all scratched up by the peacock landing on it. There went my sewing time!

Sunday was the best though. I finished my Jelly Roll Quilt Along top!!! 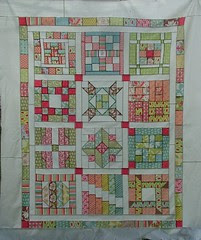 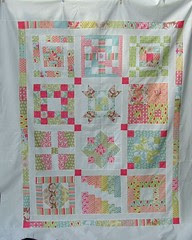 Don't you just love when the sun shines from behind your top? It almost looks like stained glass!!

In addition I finished block 4 from the FQS BOM and did the second block of the third month (I had one finished but gave the first 3 to LTW for her birthday). It was too dark for photos so I will take some today and post them later.

I am slowly working my way though some UFO's and it feels good! Now I need to make a back and the binding for the JRQAL top and send it off to LTW!! How was your weekend?

I love how you framed your JRQAL! It does look like stained glass!

Your JRQAL looks great - I need to get mine out and finish it.

Goodness you certainly were productive!! I did a fair amount of hand quilting between the naps LOL. What a difference in the quilt with the sun behind it!!

Well, your JRQAL is great but you realize that she is going to do another one pretty soon. My blocks are still sitting in a pile and not telling me what they want to be. I think they will wind up being a summer table topper, like in next summer. ;-)