Wow, I have not thought about this for such a long time!  Shelby and my other kids formed a club, The Bug Club with all the neighborhood kids when they were all little.  I am not sure what exactly they did but they did a lot in the fort and they were always doing something with nature.  We back up to a woods so there was plenty to experiment with!  And having a scientist for a mom didn't hurt either.  I remember  the time they came in with a skull they found in the woods.  They were digging for worms and found what they thought was a rock and it turned out to be a skull from a raccoon.  It kept them busy for a while trying to figure out what kind of animal it came from.  When I was in Paducah at Hancocks I found this panel and it reminded me of the Bug Club.  I have never seen anything like it before and this was the only one I found. 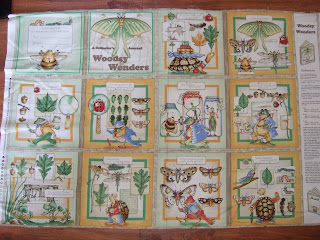 We used to catch all kinds of bugs in jars.  In fact, this last time she was home she came home with "Betty" her spider friend. (ICK) I hate spiders.  But she had been feeding Betty and keeping her as a pet.  I thought she should let her go but she wouldn't do it in MI as she is not sure what kind of spider she is and if she is native to MI or to IN.  Which is good, but since we will move her stuff from IN to MI this weekend, she can take Betty "home" and release her.  I guess she killed some cave crickets when they made their way into her apt so she and Betty became fast friends! 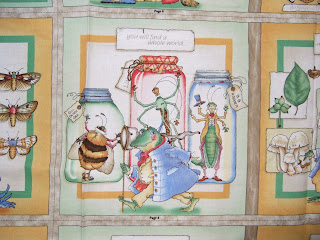 We always have plenty of butterflies and moths.  The best moth we had was the hummingbird moth.  It actually looks like a hummingbird!  I had to look twice and when I saw the antennae I had to look it up to see what it actually was. 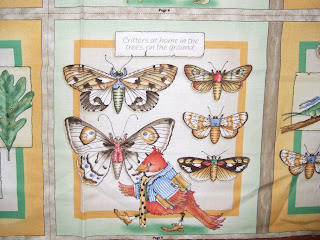 Of course we have plenty of birds too.  I wish we had more of the hummingbirds by us but my dad sees them all the time up north by the lake.  I have been amazed to see the downey woodpecker at our house.  They like the suet feeders.  Liz the whiz took me to her folks house and I got to see a Red Headed Woodpecker for the first time in person.  It was so cool!
DD2 just called.  She is "up north" in Roscommons.  She is studying Fisheries and Wildlife in college.  She is taking a 2 week class in FW techniques.  She told me they saw a Bald Eagle, porcupines, an Osprey, many hawks, turkeys, lots of fish, raccoons, mice and chipmunks.  They live caught a Chipmunk and she took it out of the trap and it bit her!  They had to tag the raccoon and take an ear punch from it.  She is learning alot and having a good time too.
I guess this is not a very quilty post, but it was fun to write.  My friend Ellen came over and picked up the 2 quilts I had for her from Liz. I showed her The Ugly Quilt (she is the one that gave me the fabric for this quilt) and she said, "wow, that fabric really is *ugly*!"  So I asked her to never again get me fabric to "work outside of my comfort zone".  Little does she know that I am giving her the remainder of those fabrics as a jelly roll for her birthday!  Muwahahahah!!!  She has been on vacation for the last week so we had a lot to catch up on.  After she left, DH turned to me and said, "no more talking for the rest of the night"!  LOL, he is NOT a talker!  I have a lax game tonight and apparently tomorrow night and that is our last game of the season.  This means I should be able to get back to my sister's quilt soon.  Have a great day!!

Lovely to see the bugs, I loved the wording "The Bug Club"

Cute bug panel...whatcha gonna do with it?!

Roscommons is close to my in-laws cottage in Grayling. DH has ridden his dirt bike and snowmobile from Grayling to Roscommons! Has DD seen any warblers?