Mother Earth and Her Children

This will be one of the final photos from Paducah.  I know, *finally*, right?  I have loved this quilt from the first time I saw a photo of it in the Quilter's Newsletter magazine.  It was so hard to believe that this was just the third quilt this woman had ever made!  This is me with Sieglinde Schoen-Smith the designer and artisian that made Mother Earth and Her Children.  Most of you probably already know her story but for those who don't here is a shortened version.  She lost her son a few years ago and decided to make a quilt to keep her mind off of his death.  She chose a story she used to read and have read to her as a child loosely translated "something about the root children".  The rest is history! 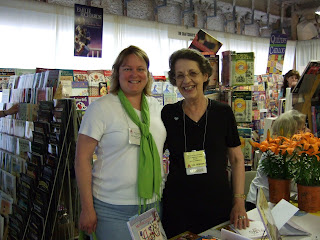 Apparently the copy rights to the story had lapsed and she has re-published the story using her quilt for the illustrations.  It is even more breathtaking in person than these photos show!  And she is really a sweet heart too!! 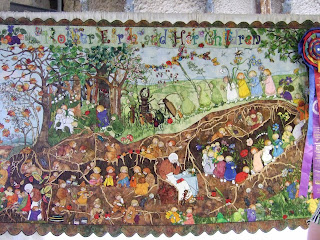 All appliqued, and embroidered.  The attention to detail is magnificant! 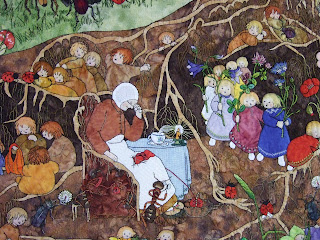 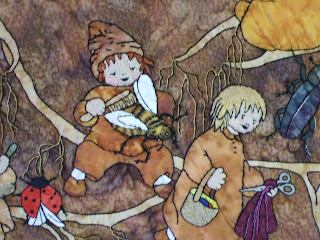 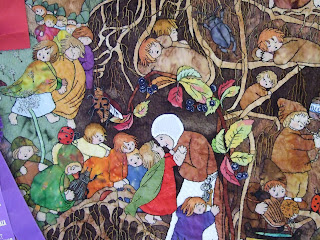 The quilt illustrates how the root children come out for spring, and head back underground for winter.  It is a truly amazing quilt.
Mother's Day must be quite difficult for her.  I can't imagine losing a child.  I have lost my own mother and strangely enough, Mother's Day is the worst holiday for me.  The first Mother's Day was the worse.  I was in a store and realized that I would never need to buy another Mother's Day card.  Even more strange because we were not particularly close but it still really got to me.  Both of my girls were not home yesterday.  DD1 had to work but she sent me a text.  DD2 is out in the middle of no-where studying fishery and wildlife *stuff* for 2 weeks but she sent an e-card and called.  DS was home but not that into Mother's Day.  He did spend the day watching some movies with me and picked up my favorite chinese for dinner.  I was actually glad when I could go to bed.  I did work on my sister's quilt for awhile yesterday, but I just didn't really feel like doing very much.  I hope you all had a wonderful Mother's Day!

Oh my goodness. I bought myself this book and I love it... the very idea that it is made of fabric leaves me stunned every time I pick it up, and now that you have shared more of the story, that I did not know, well... I am even more awestruck. Truly, I think it is such a gift that you saw the actual quilt... what a magical experience that must have been. Sigh.

Thanks for telling her story as I had never heard it before. I'm blown away and speechless by the quilt. Wow.

Arhhh Scratch and Alice gives you a kiss for mother's day. Thankyou for showing that quilt it is gorgeous wow.... her third quilt only? i wonder how long it took for this lady to work on this quilt?several months? several years? I never even knew about this lady and her quilt til you mentioned it.