In case you didn't know where I was all weekend, I was attending and working the Ann Arbor Quilt show.  I had entered 2 quilts in the show.  All members were allowed to enter 2 quilts in the show.  It was a fun weekend.  I have uploaded all my photos and will begin sharing them with you now.
I loved this scrappy star and immediately thought of my friend, Robin and her love of HST.  I might actually have to make this one someday. 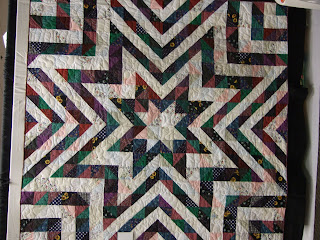 Now I am not a huge Sun bonnet Sue fan but this quilt was spectacular!  The needle turn applique was excellent and the piecing and hand quilting were awesome too. 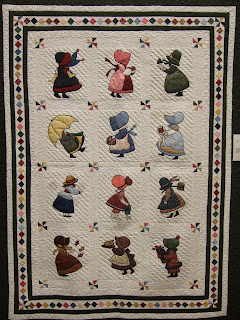 I just liked this one. 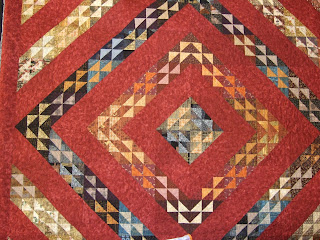 I thought this was really neat too.  I have a close up of it later.  Can you see the cats in the fabric? 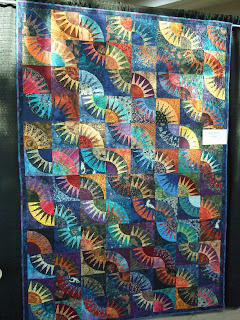 This quilt was so cute.  All about the 12 days of Christmas!  All 12 were cross stitched, I only took a couple of photos.  I would love to know where the pattern for the cross stitch came from as I would consider doing it, that's how much I liked it! 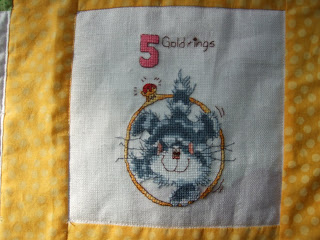 Isn't this swan so cute with her bathing cap on?  I actually ran into the woman with these squares before she had made it into a quilt.  We were both at the quilt shop and she was choosing fabric to make the quilt with. 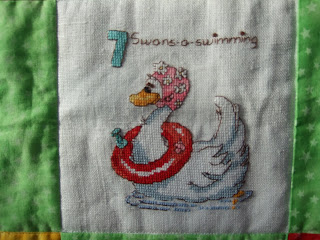 I just adore Buggy Barn patterns and this one was called Wild Goose Chase.  I love it! 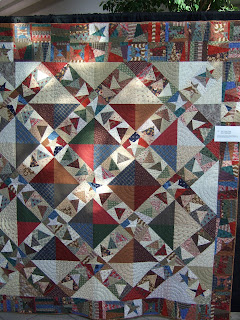 I took these to show Amy at the Calico Cat.  Aren't these cats great?  I like how they have people all over them.  Like Guliver's Travels, kind of. 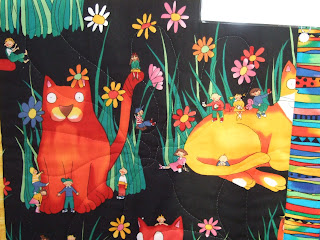 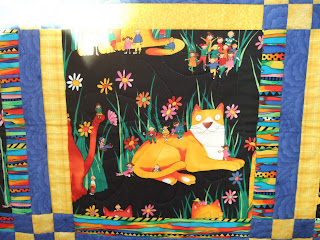 Every person that entered a quilt was required to work 2 hours at the show.  So on Sunday I was wearing my white glove and walking around and I ran into the woman that made this quilt.  It is entitled, Georgia (her granddaughter) and was from a photo taken while on Beaver Island (where Gwen Marston lives, BTW).  She was very nice and offered to show me how to do this if I was interested.  Uh, duuhhh, of course! 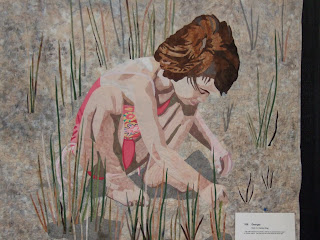 This quilt won the Viewer's choice award.  It was pretty cool.  By Sue Holdiway-Hayes (I hope I spelled that right!, sorry Sue if I didn't) 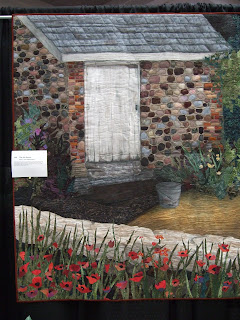 The rocks were fascinating. 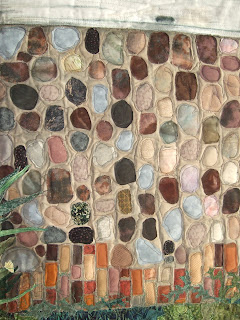 Here is an up close of the cats I was talking about.  They look like they were appliqued on but in reality they are part of the fabric! 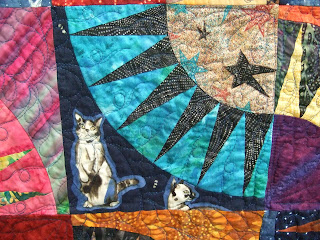 I liked this one for it's use of that fabric for the wake.  Too cool!  Check out the nautical flag fabric used in the border! 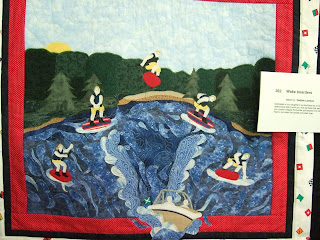 This is all I have for now.  I have more photos and will post more later.  I was pretty good and did not buy too much.  I will take some photos of what I bought and post those later too.  I bought the panel of Pumpkins Gone Wild and a charm pack to use around the panel, 2 fat quarters, a binding ruler to cut bias binding and some red scaly fabric for a project DD1 and I are thinking about doing.  I will tell you about that later too!  She won't draw what I want until I finish Prismata.  Prismata is a water dragon she drew, I enlarged and chose fabric for but have not made into a quilt...YET.  She doesn't think I will do it but it is on the short list.  She will draw the next one when I finish it.  She drew a series of pond dragons, oh, but wait, I'll show it to you later...
I did manage to get 2 more of the blocks finished for Karen and Cory's quilt.  I also got some laundry done and went to the grocery store.  DH is overnight tonight so I am planning on getting more of the KC blocks done tonight.  I am so ready to be done with that quilt but so nowhere close to actually being finished, *sigh*.

A wonderful start to the Quilt Show Wrap Up...am staying tuned for the nest installment :)

oops! I meant 'next'

Wonderful show, thanks for sharing. I love all of them that you showed; the Buggy Barn WGC is something that I will actively seek the pattern for, too; it's great!

Thanks for sharing photos of the quilt show!