The BIG, Scary Statler and the Brave New Quilter

You all know that I went to LTW's farm this weekend to work on the sampler quilt I made for my friend's wedding. I thought I would share some of the pictures LTW took of me learning how to use the BIG, SCARY Statler. We should have gotten some near the end where I look MUCH more confident, but it was late!
Here I am trying to figure out which buttons on the machine match the grid on the computer. 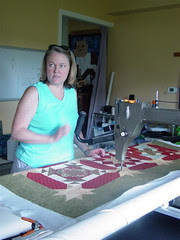 OK now you can see my very first element going in. 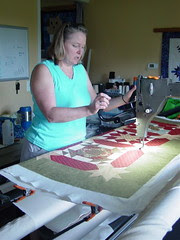 This is what it looked like stitching it in the sashing 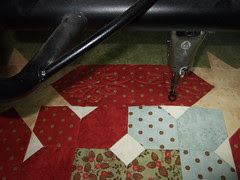 Taking all my concentration to do this 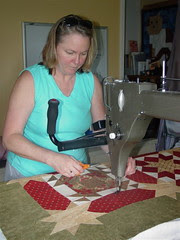 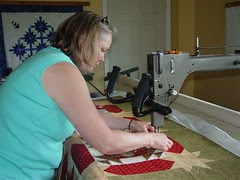 My DH and DD1 were with me at the farm too but were getting bored after about 2 hours so they wanted to go home. Oddly enough, PTM called to let me know that her DH would be going back to Canada, bring their DGD home and she was staying in town. So my DD suggested I go back home with them, go and pick PTM up and go back to the farm to play! GREAT IDEA!! I called PTM and she was up for it. I got home and thought about it and asked if I could drive the red, Mustang convertible to the farm. It was a go. You should have seen PTM's face when I drove up in that car. I don't think she recognized me! So the two cool chicks left for the farm. It reminded us of Thelma and Lousie (I got to be Thelma). We made it back to the farm, with the top down and the tunes up in no time. I meant to have LTW take our picture but forgot and by the time we finished the quilt it was dark, = ( Next time I will get the picture!

Anyhoo, I managed to get the entire quilt finished!!! LTW did the outside border, and outlined a few of the stars, but I did everything else. I did manage to snap a picture of each half of the back of the quilt to show you but none of the front. (It was around 10:30pm when we got done). I have to trim the top tonight and will get some pictures then. Here is the back in each half. 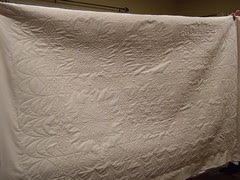 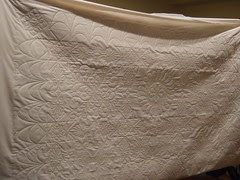 I chose each element for the quilt and I showed you that previously. I chose some designs with hearts in them because this is a wedding quilt. I also learned a LOT about design choice. Would I do them all the same way again? Probably not. There is one with a straight edge that I would probably have eliminated as it really shows if your piecing is not exact. Mine was not bad but it was slightly off. I liked the designs that filled the big block squares better than those that left the corners emptier except for the feather wreath. That fit that particular block perfectly. I will try to take photos of each block tonight and explain my thought process and choices, if you want to know.I can even show you where my piecing is not exact, lol. Although you can tweak the design if you really want to, I didn't feel it was off enough to do that. You may be bored of it already, but I have a new appreciation for all the design planning that goes into a quilt like this with all this custom quilting. I chose Quilter's Dream cotton batting, the light weight one, and a light gold, 50 wt thread. It is also amazing how the thread changes color on the quilt. Some colors I hated as a spool were nice on the quilt. Go figure!

I want to let you know about a couple of other things that are going on in my life at the moment too but will save that for another post.

Beautiful job - worth all your time and effort.

Haven't been to the gym yet but I have my 3 cross blocks done.

How fun!!!! The back looks fabulous!

Nice, I have been learning free hand designs on my long arm and it is tons of work , planning and tome. Love it

Your quilt looks great! I'm sure the couple will love it. Wouldn't you just love to own one of those machines? Imagine the quilts you could make and the designs you could do on them. Oh my..... I better start saving for one and a new house to go with it too. Have a great day and I look forward to seeing the individual blocks.

OMGosh Pam it's GORGEOUS!! I would love to read about your process :0)

I read PTW's reaction to the Mustang on her blog LOL.

oooh lucky you. i'd love tp have a play with one of those. it looks fabulous. and to play Thelma too - is she the one who gets lved up with brad pitt???!!! sorry bad typing, rotary cutter injury :-( loved your contribution for trudys arse kckin!

It looks wonderful, Pam! Is that the first time you played on the Statler?
I think you're a natural. Thanks for sharing the cookie recipe link, too.

You really look scared! *lol*
But you impress me; I think machinequilting is sooo hard to do, I can't even produce a circle and look what you quilted!! Amazing!! I'll sent my next quilttop over for you to quilt!