The "S" Quilt is all finished but the label

I have the "S"quilt back from LTW and PTM, now I just need to label it. I started this quilt 4 years ago when my DD2 graduated from HS. Her high school was "S"alem and her university is Michigan "S"tate, hence the giant block "S". Both schools used this for a symbol. I had people at her graduation party sign the 6" squares. It took me awhile to decide what to do with them, then I came up with this. The school colors for her high school were blue and white and for the university green and white. As it turns out her party invites were a block "S" divided diagonally and colored green and blue. The party info was in the top of the S and one of her grad photos was in the bottom of the S. 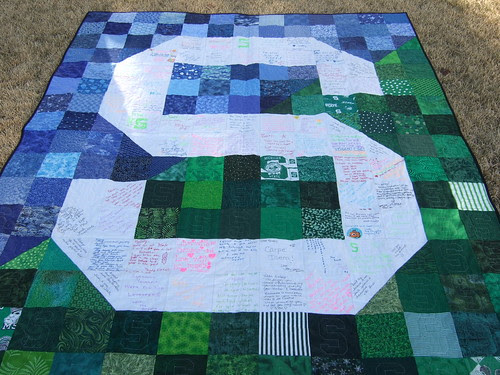 LTW quilted a block S into each block. I love how this came out! 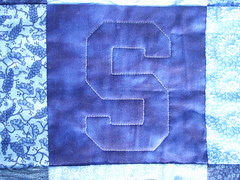 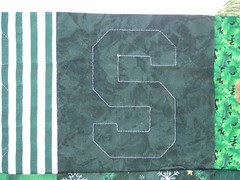 People wrote on the squares, which were white on white dragonflies, her favorite. Here is what I wrote: 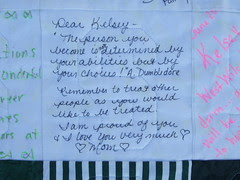 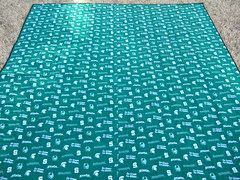 She doesn't know it yet, but this is going to be her graduation gift this year when she graduates in May from MSU.

I forgot to tell you all that she had interviewed for a job here in Ann Arbor (I work in Ann Arbor too) at the USGS (United States Geological Survey). She interviewed for a position studying Sturgeons (a kind of fish) in lake St. Clair and the Detroit river (her major is Fisheries and Wildlife). After the interview was complete they told her it would be 2 weeks and they would let her know about the position, but they cam chasing after her while she was touring the facility. They offered her the job on the spot because they didn't want to let her get away!! She is thrilled and we are thrilled for her!! Now we have to find the BF a job close by, LOL.

I worked on the sail boat quilt last night too and managed to finish the top. I need to piece the back and will take some photos today (it was almost 11:30pm when I finished!). So you have that to look forward to tomorrow. Also the final weigh in for the gym challenge is tomorrow morning. I don't seem to have lost much (as of this am, maybe another pound) I hope it is enough to keep second place in the challenge! Keep your fingers crossed for me.

Labels: My Life, My Quilts

I love this quilt! You are such an inspiration!

Awesome memory quilt! We will be cheering for Michigan St. at the NCAA tonight--Could you show how you do your labels?

Pam this blows me away - it is fabulous! She's going to LOVE it. And congrats to her on getting the job, how cool is that!!!!!

I hope you stay in second, dear one!

What a beautiful quilt. I love the colors. She is going to love it. Crossing my fingers for your weight loss challenge. Doesn't matter how you finish compared to others because you've already won for yourself.

Oh Pam she's going to treasure this quilt forever. What a clever design you came up with!!

What a great quilt!
Micki

Beautiful quilt. She must not read your blog. She is a lucky girl to have such a creative mom.

I love how its all come together really touching, the colours are great. I hope this works on the messaging
faithx

I know now that it is my graduation present! haha LOVE YOUU