Friday after the FNSI was my lab Christmas party. It is always at my boss's house. They really decorate for Christmas. Here is a little of the decorating. This just happened to be on their counter. I think it was one of my favorites this year. 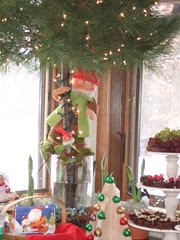 They always get a gigantic tree too. 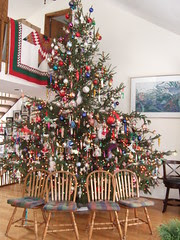 Both my boss's wife and I collect Analise elves and stuffed animals. I think of them as a little creepy which is what attracts me to them. She has this silver tree with elves all over it. You can see it from both sides. 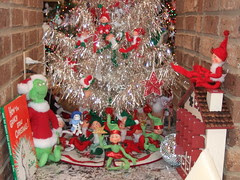 It is always a good time and we do our Secret Santa final presents. I figured out who my ecret anta was this year. I was pretty sure it was my friend, Hiro. He gave me some wonderful gifts over 2 weeks but he gave himself away. His final present was so creative. It's fun to see people from other countries and cultures first learn about SS, then, just about the time they have to go home, they really "get it" and have a BLAST doing it. You all know how much I love MSU and that I work at the "other school" (U of M. Thr first gift was a drink cozy with the block M on it. Then some u of M and MSU fabric to make a quilt with, he even included the "pattern" which was GO BLUE, GO BLUE, GO BLUE with teeny tiny MSU blocks in the corner. So funny!! Then he gave me a bottle of wine called FIZZ. Funny because I made some antibodies for him that were directed against a protein called FIZZ.

He also thanked me for all my help, for being his friend, for making Yuki one of my BFF's and for being his "walking dictionary", LOL. Anytime he had an English question, he would ask me about it. He is going back to Japan soon to join Yuki and their new baby. WE see many people come and go through the lab but I will really miss them both. It was never a chore to help Hiro he is genuinely a great guy and I am so happy to have them both as my friends. I will miss them both! 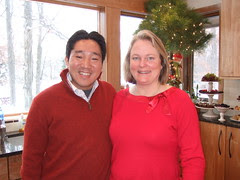 I am very lucky to work with one of my best friends too. Neither of us like to have our picture taken but we did manage to get one.

My boss's wife, Robin and another woman in the lab, Judith are fellow quilters. I like to think that I helped them both begin quilting. I know I badgered the heck out of Robin and now I think they are both addicted! Yessss, my evil plot worked!! First Robin and Judith (with Hiro) 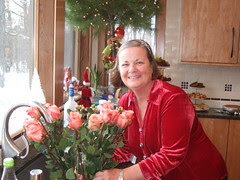 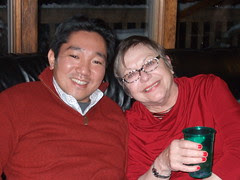 There are more photos on Flickr if you want to see more of the party. It was a great time!! Thanks Steve and Robin!!

Another lovely party had by all. Nothin' wrong with encouraging a quilting addiction, the more the merrier :0)