On to the Next Quilt...An old UFO

After I finished the sail boat quilt I decided I needed to work on another project. I have many UFO's just waiting for my attention and decided I needed to work on my One Block Wonder quilt. I had pinned it to the flannel of my design wall one night at PTM's house. I took the design wall down and brought the flannel part home with me. I spread it out over my couch and this is what it looked like. 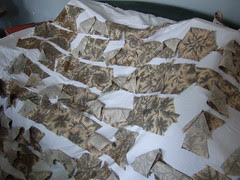 And guess who was hiding under the design wall?? Jack. He stayed there quite awhile too. 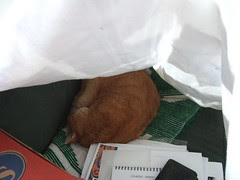 I was happily sewing away and Mosen thought he would "help" me with it. There were obviously not enough cat hairs on it for his liking so now there are! I kicked him off 4 times and he kept jumping up on it. I finally swatted him and he stayed down. It made a great photo though, don't you think?? 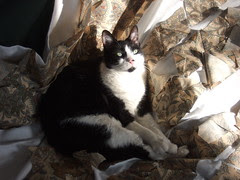 I ended up sewing about a third of it together. Then DH wanted me to watch 28 weeks later with him so I am doing that and blogging. It's a zombie movie. Scary! I don't think I want to keep sewing the OBW at night anyway as it is kind of tricky to put together and I don't want to screw any of it up. I hope you all had a productive weekend too!!

That's neat Pam, but not so easy with "helpers". Don't think I could watch a zombie movie....

the one block wonder looks confusing - i don't think i could keep it all straight ... good thing you like scary movies, huh?

Red can get like that too. Last time I sewed, I had to put a favorite blanket near the sewing machine so he would stay off the quilt I was sewing. Congrats on the weight loss challenge!

Mosen looks like he is saying whats the problem, I'm comfortable. It will be interesting to see the OBW come together.

It's a good thing you used safety pins....Mosen would have been in for a BIG surprise!! I love the colors in this quilt and look forward to seeing it all together :0)

Mmm, this looks confusing to me! If I had such an ufo it would probably stay an ufo! I'll google "one block wonder" to see what it will be someday hahaha

oh wow! I just found pics on the internet. That's a very intricate pattern. You should finish it, it makes a stunning quilt and you were very brave to start this!